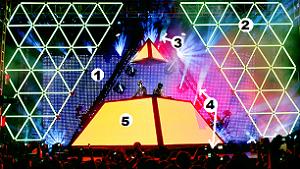 There’s a lot to love about French duo Daft Punk’s live show, which landed at the Greek Theater in Berkeley on Friday, July 27th. The remixed and mashed-up versions of their well-known classics make the performance endlessly entertaining; the question of whether they’re actually “performing” at all (or if, in fact, the two guys in robot masks are even Daft Punk) could give post-modern theorists a field day. But what makes the show utterly riveting, and unlike anything seen before, is the light show.

The Daft Punk stage setup comprises five distinct lighting elements, each of which would, on its own, be worth the price of admission. First, a giant low-res LED curtain screen covers the back wall (1, above); a triangular grid of LED strips with opaque covers hangs in front of that (2); directional spotlights shine out from various points on stage (3); lighting strips outline the top and bottom of the stage (4) and form a large triangular outline for the “mothership:” a pyramid (5) covered in a high-resolution LED screen, in which the duo stands and performs. All the lighting elements are perfectly synchronized to the music: they fade to black when the music winds down, and explode in color when the songs reach peak intensity.

With such a formidable canvas, it would be tempting to run things at full-bore all the time; however, what’s most admirable about the lighting design is the way elements are held back for dramatic effect. Some elements stay dark for the first part of the show, and when they light up for the first time, it’s typically in flat white, giving the impression that the lights are simpler than they really are. Then, when more complex patterns are introduced, it’s all the more surprising. The pyramid itself, the centerpiece of the show, doesn’t even switch on until halfway through the show: when it first glows white, the crowd applauds; when it flashes red, blue and green, the crowd cheers; when graphic patterns suddenly race across it in a vertigo-inducing display, the crowd goes insane. That’s right; at this show, people cheer for the lights. They should–the setup cost four million dollars.

Lighting director Martin Phillips and UK producers XL Video originally put together the rig as a one-off for Daft Punk’s highly-anticipated set at Coachella in 2006, and have adapted it for this tour. According to XL Video’s web site, the pyramid is constructed from “over 1600 Barco O-Lite blocks, which have been custom pixel mapped to create a 3-dimensional video screen surface.” The video and lighting content is all run from a digital server running five layers of programming (one for each distinct element); a backup system runs concurrently, just in case. Observant viewers will see the two systems’ monitors off to the left side of the stage, displaying smaller versions of the pyramid’s video content. XL’s site says the lighting server actually receives live signals from the band, which apparently trigger the elements, allowing for improvisation. So it turns out something is actually being done live by the robot-masked men.

Musically, Daft Punk treat their songs like digital “memes,” dropping recognizable snippets into the mix like DJs, and the lighting system follows along, with each song given its own visual theme. For instance, early in the show, the duo teases the audience with a brief vocal clip from “Around the World,” and a glowing rainbow effect flickers on and off. Later, when the full song emerges, the rainbow effect takes over the entire setup. For a finale, all the lights fade to black, except for a glowing red stripe, which crawls from the stage, up and over the triangular grid, down onto the pyramid, and up to the bobbing robot masks, which suddenly themselves switch on in bright red outlines, like characters from “Tron.” As the music crashes to an end, the duo turn away from the audience, and glowing electrically on their backs is the Daft Punk logo. The audience, needless to say, loses their minds.

Thus, the success of the Daft Punk tour doesn’t necessarily speak to a sudden popularity of “electronica” or an appreciation for things French: it’s a one-off spectacular that anyone who’s interested in where technology can take live performance should see. Catch the last two dates Tuesday 8/7 in Montreal and Thursday 8/9 in New York.

Videos after the jump.

“One More Time” at the Greek:

Excellent history of Daft Punk at The Fader’s site.