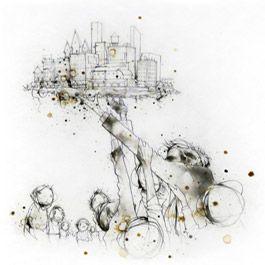 So are “transitional” homebuyers guilty of class warfare? It’s easy to talk about the downside of gentrification—high housing prices, evictions, and a creeping nimby-ism that elbows out social services. But there are benefits, too. When the white middle class left America’s cities in the 1950s and ’60s, they took the tax base with them, leaving behind concentrated pockets of poverty and powerlessness. Upscale newcomers bring investment, jobs, and tax revenue to neighborhoods that desperately need them, as well as intangibles like the political know-how required to extract money and services from urban bureaucracies.

There’s also the environmental benefit. Renovating a house in the urban core is far more sustainable than commuting to a newly built subdivision. A University of Toronto study found that residents of low-density suburbs consumed twice as much energy and produced twice as much greenhouse gases as those living in the city centers.

Whether the costs outweigh the benefits is a tough call, partly because some of what we think we know about gentrification isn’t exactly right. Take displacement. A 2005 study by Lance Freeman, a professor of urban planning at Columbia University, found the chances that a poor resident of a gentrifying neighborhood would be forced to move were only 1.5 percent—compared to a 1 percent chance of that same resident being displaced in a nongentrifying neighborhood. This is partly because poor people tend to be transient anyway, and partly because poor neighborhoods tend to have high vacancy rates. Maureen Kennedy, a Clinton administration housing official who coauthored a study of gentrification for the Brookings Institu­tion, found that in one Cleveland neighborhood, city residents believed there had been an enormous dis­placement of blacks by whites, although census data revealed that there had been only a “modest inflow” of white residents. But, she adds, “perception be­comes reality.”

That’s in part because blacks are moving to the suburbs at twice the rate of whites, an exodus driven as much by high crime as it is by high housing prices. “At least 50 percent have left because of poor education and poor public safety,” says housing activist Charlene Overshown, who two years ago moved back into the West Oakland neighborhood where she grew up and has been astonished by the rise in rents and the increase in white residents.

It’s true, though, that gentrifiers often exist in a kind of parallel universe. They live behind locked gates, send their kids to private schools, shop outside the neighborhood, and avoid the parks. As Freeman observes, their only interaction with the neighbors may come when they call the cops because the music’s too loud.

Get involved, suggests Nancy Gapasin Gnass, a high school history teacher who bought into San Francisco’s Mission district during the final days of the dot-com boom. She sends her daughter to a local school where 79 percent of the students receive free or subsidized lunches and 80 percent are Latino or black; she volunteers at the school, sits on the pta and the school site council, and has organized a group that revitalized the local park. When Gnass’ daughter turned six this year, she invited the entire class. Eighteen out of twenty children came to the party and brought their families. “We all walk to school together,” says Gnass, who is Filipina. “My Spanish is horrible, but I try.”

Newcomers elsewhere have helped their neighbors fight evictions, taught at the local school, and started businesses that hired locals. Make sure to patronize local businesses and help the owners figure out how to “ride the wave” of new customers, adds Kennedy. Most important, urges Overshown, “Help us fight for more affordable housing. If you say this is the only place you can afford to live, well, let’s all fight so that at least some of the folks, the folks who want to stay, can stay here.”