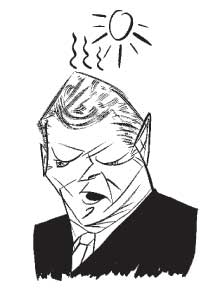 NOMINEE 1
Rep. Dana Rohrabacher (R-Calif.), who displayed his scientific knowledge about prehistoric warm eras at a congressional hearing: “We don’t know what those other cycles were caused by… Could be dinosaur flatulence. …Who knows?”

NOMINEE 2
Rep. Joe Barton (R-Texas), who had been denounced by a Republican colleague for seeking to “intimidate scientists” by grilling top climatologists about their funding, declared during a debate in December that “for us to try to step in and say we have got to do all these global things to prevent the earth from getting any warmer in my opinion is absolute nonsense. It’s not going
to happen.”

NOMINEE 3
Reverend Jerry Falwell, who declared in a fiery February sermon that global warming “does not exist” and that “naive evangelicals” are being “duped by these ‘earthism’ worshippers” who are actually agents of “Satan’s attempt to redirect the church’s primary focus” away from evangelism.

NOMINEE 4
Senator James Inhofe (R-Okla.), who, when he chaired the Senate Environment Committee famously branded global warming the “greatest hoax perpetrated on the American people,” told us this winter that whatever planetary heating we’ve experienced is “due to the sun—isn’t that remarkable?” In an interview with the Tulsa World, the senator added that the scientific community was taking propaganda cues from the Nazis: “It kind of reminds…I could use the Third Reich—the Big Lie. You say something over and over and over and over again, and people will believe it.”

NOMINEE 5
Rush Limbaugh, whose constant exhalations of hot air can’t be helping matters, opined that the now-iconic photos of polar bears stranded atop melting icebergs were nothing to become alarmed about: “They’re just playing around…just like your cat goes to its litter box. When’s the last time your cat got stranded in its litter box?” (Rush then ad-libbed nonsensically, “Just like your pit bull attacks and kills the neighbor’s baby horse, whatever, I mean these things happen. It’s called nature.”)

WINNER!
James Inhofe. In a January appearance on Fox News, Inhofe bravely unmasked the dark master behind this global conspiracy: “Stop and think about it: It’s all about money. What would happen to the Weather Channel’s ratings if people weren’t scared anymore?”