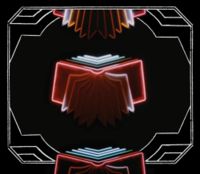 I can’t believe I’m typing this, but it seems entirely possible that Arcade Fire, the iconoclastic Canadian underground indie-rock mega-combo, may ride a wave of publicity to the top of the US charts this Tuesday (3/6) with their sophomore album Neon Bible. They just performed on SNL (also, apparently, doing an off-stage number right after the show just for the studio audience) and they’re all the blogs can talk about. They also remain one of two bands who have ever made me, ahem, misty-eyed at a live performance. (Okay, fine: the other was Low. All those other times, I just had something in my eye, really.)

New Yorker music critic Sasha Frere-Jones was a little late to the party on the Fire, but makes up for it with a fine article this week. He follows the band around to their recent London shows (lucky!!!) and admires their lo-fi tendencies by saying it’s “hard to imagine” them ever using a cordless microphone. I found that reference kind of amusing: capping off the aforementioned tear-inducing performance (at Coachella in 2005), lead singer Win Butler unplugged his mic and threw it in a high arc out over the massive crowd (see that at the end of this video here). It sounds silly now, but it was a heart-stopping moment, capping off probably the greatest live show I’ve ever seen in my life. I guess that doesn’t really count as a “cordless mic,” though, does it.

I’ve heard Neon Bible (like anyone with DSL has at this point), and it’s great. There probably aren’t any breakout hits (like “Rebellion (Lies)” from their debut album Funeral) but that seems kind of the point: the new songs unroll at their own pace, like hymns, without hurrying to a pop “hook.” This is a band who adamantly refuse to license any music (even, apparently, for Oscar-winning, if supremely hacky, directors), and who are so DIY, they can manage to screw up a charity single upload. Nothing against Norah Jones, but if they knock her off the #1 spot, it will be kind of exhilarating.