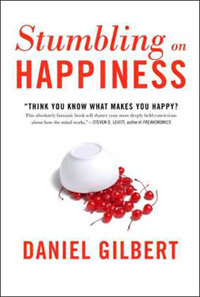 In all, the book is a thought-provoking and persuasive discussion of why a huge portion of a very wealthy, very powerful country wanders astray when it tries to find contentment. The reason, argues Gilbert, lies partly with our society but mostly with ourselves. The human mind is hardwired to guess wrong, to imagine wrong, to make wildly inaccurate predictions and assumptions. And in the end, when we find ourselves dissatisfied with the end result of a course we chose entirely on our own, we wonder why.

Dan Gilbert is here to help. Mother Jones spoke to him by email when he was at his lab at Harvard University.

Mother Jones: The title of your book is “Stumbling on Happiness.” Do people stumble on happiness the way a wanderer stumbles on an oasis in the desert (“stumble upon”), or the way a father stumbles on a child’s toy in the dark (“stumble over”)? Thematic aspects of the question aside.

Dan Gilbert: Most people think it is the first, but it is actually the second. The book is about the mistakes people make in their attempts to locate happiness. In this sense, people stumble on happiness the way Dick Van Dyke stumbles on an ottoman. Or the way Chevy Chase stumbles on everything. Or if you are too young to conjure either of the images, then how about the way Paris Hilton stumbles on high heels when she’s totally ripped?

MJ: A central argument of the books is that people are terrible at predicting what will make them happy in the future because the human imagination is fundamentally flawed. As a scientist, you could have tried to cure depression or ADD; why did you decide to pick on something as lovable as the imagination?

DG: It does seem a bit like using Bambi for target practice. But the fact is that the way we imagine the future guides our choices and decisions in the present, and thus its imperfections have dramatic consequences for all of us. Depression and ADD affect a small number of people, but failures of imagination affect everyone every day. Imagination is a marvelous faculty — I go so far as to claim that it is the essential characteristic that distinguishes human beings from other animals — and it works quite well in many ways. But it isn’t perfect, and its imperfections matter to all of us.

MJ: You write that due to the problems with the human imagination, the best predictor of what will make Person X happy is not Person X’s own best guesses, but the feelings of others who are currently going through what Person X might go through. Why isn’t this obvious to everyone? Why would so many people hear that claim and say, “No way”?

DG: First, this is sometimes true — not always. There are certain conditions under which another person’s experience will be a better guide to your own experience than your imagination will. But why do most of us reject even this more modest claim? Because we think we are unique. Because I am unique, I don’t think someone else’s experience of moving to Alaska or marrying a lawyer or drinking cappuccino with mint leaves can tell me much about my own. This turns out to be wrong. People are not as different in their emotional reactions as they think they are. Emotional reactions are generated in large measure by the parts of our brains we share with every other mammal, and people are surprisingly similar in this regard. If there are people who hate salt, fat, sugar, sex, friends, and warmth but love pain, hunger, and social exclusion then they must be very good at hiding because no one has ever seen them.

MJ: In addition to arguing that humans have no solid concept of what will make them happy, you include a quote from Pascal that (when paraphrased) says that all men are motivated by happiness, including those who make war and those who avoid it, and even those who kill themselves. How difficult was it to write a book about a word that can be twisted in so many ways it almost becomes meaningless?

DG: All words are ambiguous, so the important thing is to say what one means by happiness before attempting to analyze it. And that I do. I don’t think Pascal was making happiness meaningless. Indeed, I think he was saying that it is the basic motive that underlies all others. Regardless of what you think you are doing, you are actually attempting to gain pleasure and avoid pain. This is a radical claim that many philosophers and psychologists reject, but I think it is probably right and I explain why in my book.

MJ: You have an extremely interesting explanation for why capitalism exists in Chapter 11. Care to explain?

DG: I argue that for economies like ours to thrive, people must work for goods and services. People only work for things that make them happy. So societies have to convince their members that goods and services will do this. They often don’t make us happy, of course, and so the question is who engineers this great lie? I explain that there is, in fact, no conspiracy to delude us. Rather, the great lie arises all on its own. How this happens is a bit complicated but I explain it in my book with lucid, insightful, and charming prose. Ooops. You were supposed to say that, not me.

MJ: So if capitalism depends on people being deluded into thinking that producing and consuming are routes to happiness and yet the wealthy are no happier than the middle class, which you argue in your book — why do people continue to buy in?

DG: The Japanese have a lovely saying about fools: “He asks an elm tree for pears.” When money doesn’t buy the happiness we thought it did, we tend to think we must not have earned enough of it. It takes special circumstances before we question whether we might be asking money for something it can’t provide.

MJ: The Mother Jones article “Reversal of Fortune” argues that for a long time, westerners have believed that economic growth, fueled by individuals working hard and pursuing more and more cash and goods, makes everyone happy. But recent economic trends show that economic growth is making the rich richer and doing nothing to affect the poor and middle classes — wages at the bottom of the American economy have stayed stagnant, in real dollars, since the 70’s. The GNP curve is up while “life satisfaction” indexes have stayed the same. Yet people don’t clamor for change. Your thoughts?

DG: Nothing surprising here. Money makes a huge difference to the happiness of poor people. If you live in a cardboard box under a bridge, money can improve your happiness dramatically. But once you have a decent middle-class existence — food, shelter, security, and all the rest — money does less and less for you until eventually it does nothing at all. The irony, then, is that in a “rich get richer” society, the people who are getting the money are the people for whom it can do the least, and the people who are not getting the money are the people for whom it could do the most. If a single dollar bill can buy one unit of happiness for a rich person and one hundred units of happiness for a poor person, on whom should that dollar be spent?

MJ: Bill McKibben, the writer of “Reversal of Fortune,” notes, “Traditionally, happiness and satisfaction are the sorts of notions that economists wave aside as poetic irrelevance. An orthodox economist has a simple happiness
formula: if you buy a Ford Expedition, then ipso facto a Ford Expedition is what makes you happy.” But the field of “Hedonics” started to change that, and more and more researchers started seeing happiness as an observable, definable thing. Do economics need to be reworked? If so, how?

DG: Yes, the economist’s notions of utility (a euphemism for happiness) and revealed preference (the idea that if you buy something then you must like it) need to be revised and abandoned, respectively. Economists used to be very fine psychologists (Adam Smith was clearly both), but somewhere along the way the field decided to trade a nuanced and realistic view of human nature for the simplicity and precision of hypothetical fictions. Economics is in the process of remedying that, and economists now study happiness, take interest in experimental psychology and neuroscience, and so on. Their field is learning a lot from ours and I’m delighted. I hope we will repay that attention by learning some of the lessons they have to teach us (and they have many). Maybe next year.

MJ: Thanks very much for talking with us. We appreciate your time.

DG: Happy to have done it. I think.