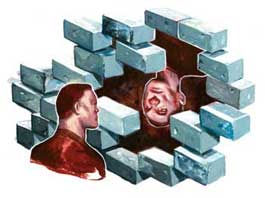 On a breezy October day shortly before his reelection, 14-term California congressman and long-shot GOP presidential candidate Duncan Hunter stood on a bluff overlooking his proudest accomplishment to date—the 14-mile barricade between San Diego and Tijuana—and declared victory. Congress had just passed a bill he’d cosponsored to build an additional 800 miles of border fence. “The fence will be built. This is not a recommendation. It’s a mandate by Congress,” Hunter told reporters. “Where we’re standing right now, before they built the fence, this was a no man’s land. We’ve cut smuggling down more than 95 percent in this area.”

Two weeks later and a hundred miles to the east, John Hunter knelt over a jug of water he’d planted in the Yuha Desert. Squinting into the scorching sun, his lean frame clad in jeans and a Virgin of Guadalupe T-shirt, John, who leads a group that maintains water stations for migrants, pointed to where two men perished last July as they tried to cross into El Norte. “The narcos, the fence won’t bother them at all,” he said. “It’s just gonna affect the cook at Denny’s. The cook at Denny’s is gonna have a harder time and his girlfriend’s gonna die crossing.”

This tale of two brothers could stand in for the larger border debate, a weird combination of diametrically opposed positions and surprising synergies. John supports border fences in some instances. And Duncan supports John’s work. At a memorial service for the Hunters’ father last September, Duncan’s friend and fellow Republican congressman Darrell Issa discreetly slipped John an envelope. Once home, his wife opened it and found a check for $25,000. “We understand each other’s arguments,” John says. “What’s important is to do the right thing.”

Each brother can lay claim to a more nuanced understanding of the border than most gasbags on either end of the political debate. Born and raised within a couple hours’ drive of the border, they share a deep respect for the two defining forces in their world: the desert and the military. They know that the desert sun can burn human skin in minutes, bring on dizziness in half an hour, and kill in a matter of days. “I’m not a desert-lover,” says 51-year-old John, who is tall and green-eyed like his older brother. “I’ve been here too long. It’s just a bunch of sand. It’s roasting slowly.” It’s also a magnet for military bases and weapons contractors, prime constituents of the congressman, who served as chairman of the House Armed Services Committee until this January. For his part, John, who has a Ph.D. in particle physics, has made three recent trips to Iraq as a volunteer to assemble armored vehicles of his design.

For Duncan, 59, the desert and the military coalesced into a career-long push for a fortified border, a quest partly fulfilled by the mid-1990s construction of the “triple fence” that runs inland from the Pacific. The number of migrants apprehended in that San Diego stretch dropped 75 percent—but rose in the inland deserts and mountains. And overall, the number who die each year (most from heat exposure) has almost doubled. Duncan Hunter’s
Secure Fence Act calls for five more sections of barricades, the longest running from Calexico, California, to Douglas, Arizona, though caveats shoehorned into the bill will allow for “virtual fences” in places (see “Border by Boeing,” January/February 2007).

But while the “success” of his Tijuana/San Diego fence prompted Duncan to seek further fortification, the previously apolitical John had a very different reaction. “I saw in the newspaper that these guys were dying. It was pretty obvious that it was because of the fence. It’s in my back yard. I feel there’s some ownership. I don’t care who they are. If they’re dying out there we should stop that.” In 2000, he launched Water Station Inc., a volunteer-driven effort that covers 200 square miles of desert trafficked by migrants. Every two weeks from April to October, volunteers descend upon predetermined sites, nestling gallon jugs of water into sturdy blue bins labeled “Agua” and marking them with 20-foot poles topped by festive
orange-and-blue-striped flags.

John has no way of knowing how many lives Water Station has saved, but migrants occasionally leave a token of gratitude—a few pesos or a small knickknack. John is not completely anti-fence but wants barriers limited to high-traffic urban areas: “The people who die are the poor people. They’ll go where the fence isn’t. Historically it drives them into more and more deadly areas.” By contrast, Duncan told a congressional committee last summer that “if you have only the urban areas fenced, and you have the desert unfenced, you’re going to continue to have people that go across.”

Nevertheless, Duncan (who declined to be interviewed) has aided John’s push to save the lives of those who do cross. He prodded the Bureau of Land Management to give Water Station the right to set up on public land and helped secure $92,000 for John’s proposal—later defeated—to install lifesaving buoys in the All-American Canal, a 200-foot-wide aqueduct that skirts the border. In July, testifying before a congressional committee on the efficacy of a fenced border, Duncan boasted, “You may know, my brother is a well-known humanitarian who…puts out water in the desert to keep people from dying of thirst.” John rejects the “humanitarian” moniker, saying, “The average person associates those guys with losers.” He adds: “We come from the same mother. We only fistfight on alternate Tuesdays.”