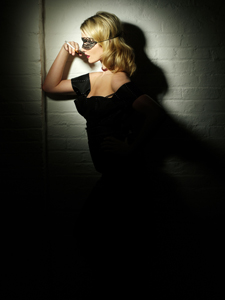 Just as the media hype surrounding the backstabbing sexual exploits San Francisco’s glossy-haired, white-wine-guzzling mayor was being artfully supplanted with promises of free bus rides and bon fires on the beach, Gavin Newsom’s penchant for loquacious women has the mayor’s career-damaging personal life front and center once more.

Mayor girlfriend and actress, best known for her role as “Younger Woman in Market” in Something’s Gotta Give Jennifer Siebel (shown right in happier, more sultry times) defied all reason and PR manuals when she told the San Francisco Chronicle the “the woman was the culprit” in the Mayor’s recently revealed affair with the wife of his friend and campaign manager. But the real meltdown didn’t occur until Siebel took it upon herself to defend her comments in a post to local blog, the SFist, which had criticized her remarks. A sample of the ramblings, which begin so innocently, with “hey there” and quickly spiral out of control to the point that the Chronicle declined to reprint the entire post:

i am not going to blindly support a woman who has cheated on her husband multiple times and watch while my boyfriend is the only one who gets punished..and, what, for something a long time ago when the man was going through a crises- divorce, the loss of his mother, the pressures of being mayor, etc. and he was vulnerable and lonely? and, what’s your definition of affair? he’s been so hurt by this all — personally and professionally- and it was a few nothing incidents when she showed up passed out outside of his door. come on guys, have a heart. I have tried to see Ruby’s side of the story but unfortunately everyone near to her has stories and says she is bad news.

And, most sadly, especially since she’s about to get dumped, ends:

gavin is and has taken responsiblity and it’s not like i haven’t given him tough love through this at times. but anyone close to him knows he is a good man and a great mayor and think what you want of me, i’m just trying my best and obviously making mistakes here and there. i didn’t know i was getting into this mess in the first place and it’s been a hard position to be in. i hope you all will just leave me out of this…and let the past stay in the past.

Siebel apologized (concisely) earlier today, but so much for the Mayor’s 1 month sober.