Folks who oppose the war in Iraq (and are ticked off at the deception and misdirection that got us into it) shouldn’t read too much into Hillary Clinton’s expected drubbing of anti-war insurgent Jonathan Tasini, notes John Nichols over at The Nation. Clinton after all, in addition to enjoying all the advantages of incumbency, is an A-list celebrity and a formidable fundraiser. There are races, though, where anti-war messages are more interestingly–perhaps decisively–in play. Nichols lists a few.

* The Maryland Senate race, where former NAACP executive director Kweisi Mfume has been far more aggressive in his opposition to the war than Cardin. Mfume’s focus on the cost of the war is especially noteworthy. “The billions of dollars being spent to wage this war continue to distort our priorities and drain our economy of much needed resources,” the former congressman argues. “We don’t ever seem to have the money that we need when it comes to driving down the cost of health care or driving up the quality of our public schools, because we are throwing so much of it into this war.”

* Maryland’s 4th Congressional District, where veteran activist Donna Edwards has come on strong at the close of her Democratic primary challenge to complacent incumbent Albert Wynn. With fresh endorsements from the Washington Post, the major newspaper in the district, and the region’s Teamsters, Edwards is clearly credible. And she is closing with a strong anti-war message in a race against a Democrat who she blisters for “casting his lot with Bush and the Republicans on such critical issues as Iraq…”

* Minnesota’s 5th Congressional District, where Democrat Olav Martin Sabo is retiring. Several of the candidates in the crowded Democratic primary have articulated anti-war positions. Of the frontrunners, the most aggressive is state Representative Keith Ellison, who says, “I am calling for an immediate withdrawal of U.S. troops from Iraq. I opposed the war before it began; I was against this war once it started and I am the only candidate calling for an immediate withdrawal of troops.”

* Arizona’s 8th Congressional District, where Republican incumbent Jim Kolbe is stepping down. The Democratic field is crowded and Jeff Latas lacks the funding and the name recognition of several of the other candidates. But the retired Air Force fighter pilot is a compelling contender.

Nichols, citing the example of the staunchly anti-war John Sarbanes, son of Sen. Paul Sarbanes and a frontrunner for an open U.S. House seat representing Maryland’s 3rd District, also argues that “[o]nly when Democrats have the wisdom and the courage to articulate a clear anti-war position will they begin to steer the debate in Washington.”

For more on the November elections, check out the Times’ nifty interactive map (click on it). 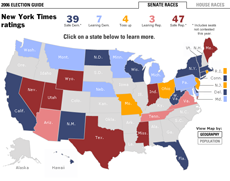