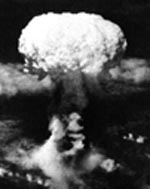 Marking the 61st anniversary of the atomic bombings of Hiroshima and Nagasaki, Tom Engelhardt today considers the nuclear history of the Bush era, with a particular focus on the administration’s paradoxical drive to overcome, via anti-proliferation wars, the nuclear taboo that since the end of the second world war has restrained members of the nuclear club. He writes:

Of course, in this era, the most obvious nuclear “flashpoint” remains the only country ever to use nuclear weapons — us. While several American presidents have, in the years since 1945, considered the “nuclear option,” they were always held back by the “nuclear taboo.” This administration has seemed particularly eager to figure out how to overcome that taboo and turn such weaponry into a usable part of the American arsenal. Its 2002 Nuclear Posture Review was already threatening nuclear use against axis of evil states (among others) as well as suggesting that such weapons might somehow be employed in a “future Arab-Israeli crisis.” The administration also developed elaborate plans for building up American nuclear forces, investing in new generations of “mini-nukes” and “bunker-busting” nukes, and planning more generally for the distant nuclear future. …

In fact, in the name of stopping proliferation, top administration officials, including the President, continually remind us that all options remain “on the table.” Thanks to New Yorker reporter Seymour Hersh, we learned recently what this really meant in the context of a possible future American assault on Iran’s nuclear facilities. In a piece on Pentagon resistance to the administration’s desire to attack Iran, he reported: “In late April, the military leadership, headed by [Chairman of the Joint Chiefs] General [Peter] Pace, achieved a major victory when the White House dropped its insistence that the plan for a bombing campaign include the possible use of a nuclear device to destroy Iran’s uranium-enrichment plant at Natanz, nearly two hundred miles south of Tehran.”

Nuclear weapons as anti-nuclear-proliferation devices; anti-proliferation wars as a way to end the “nuclear taboo” and open the door to the “ordinary” use of such weaponry — talk about diabolical. As can now be seen in Lebanon, in Iraq, and in Afghanistan, so in its nuclear policy, the only thing the Bush administration seems actually capable of doing is exporting ruins to the rest of the world. In this sense, it has offered the world a model drawn directly from the charnel house of nuclear policy which began on a clear day over Hiroshima sixty-one years ago and has never ended. …