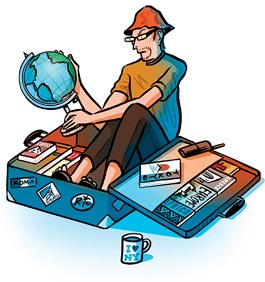 A few years ago, a taxi driver and travel writer named Brad Newsham decided he was fed up with unethical travel, with the voyeuristic haves traipsing through the world of have-nots, leaving nothing behind but a few measly dollars. “I got to a point,” Newsham says, “where I realized, ‘Okay, in my 20s I was having grand adventures. But now I’m an adult, asking, What is my responsibility?’ I think it is almost unethical to go places and take experiences and not give something back.” Newsham envisioned a new kind of travel. He raised $26,000 in donations and formed a “Backpack Nation” of travelers to fan out and distribute the money to people who needed it. His goal was “to transform the West’s 2 to 3 million independent travelers into an army of global ambassadors, emissaries of peace, a roving force for good, and thereby help to save our world.”

I first read about Newsham’s ethical travel venture while I was slogging through the Malaysian province of Sarawak, itself a corrupt, overlogged, native-crushing, ecotouring, ethical minefield. I empathized with his effort to wrestle the issues we all face when we step on a plane and out into the world: How do we travel ethically? How do we know if we’re doing any harm? The tension between visitor and visited has existed since the first pleasure voyage, and there are many modern twists: Are we destroying the coral reefs, ancient ruins, and natural wonders in the rush to see them? Are we supporting corrupt regimes by spending our money? Does the massive global warming effect of airline travel outweigh even the greenest ecotour? And is it even ethical to travel at all, or would the world be a better place if we all just stayed home?

These questions have become more urgent, given the scale of modern travel. Last year more than 800 million tourists traveled internationally, and in 2004 tourism generated $623 billion, making it one of the largest industries in the world. Yet somehow that rising tide has not lifted all the boats (except, perhaps, cruise liners), and a growing number of travelers are asking questions like Newsham’s and looking to such movements as pro-poor tourism, fair trade tourism, and ethical travel for answers.

Travel writer Jeff Greenwald founded EthicalTraveler.com in an effort to provide some of those answers, such as a list of the most ethical destinations, and tips for being an ethical traveler no matter where you go: Bargain fairly, learn to listen, be open to the people you meet, and watch where your money goes. “People are going to travel. Their money is going to have an impact on these countries. Whether it’s a positive impact or an impact that helps feed a despotic regime like in Burma is up to the traveler,” says Greenwald. “I’m very much in favor of individual travelers going to Burma as long as they watch carefully where their money is going, speak to people, are aware of the situation there, and share that intelligence when they return home.”

Watching where your money goes is a core issue for Tricia Barnett, director of Tourism Concern, a U.K.-based organization that has been working to establish ethical travel standards since 1989. “What we discovered very quickly after Tourism Concern was set up,” says Barnett, “was how very little of the money that is spent when you go on holiday actually goes into local pockets.” This is especially true of all-inclusive resorts and cruise ships, which soak up money like giant sponges. To counter this, Tourism Concern has published The Ethical Travel Guide to help you travel globally and spend locally. But the ethical travel market is still small, and most of the time you’ll be on your own trying to work out the ethics of your trip. “You can’t micromanage every country you’re visiting,” says Greenwald. “But you can let the leadership and the tourism authorities know what your priorities are, and let them know you have a choice where you’re going to go.”

To do this, however, you need to educate yourself about the places you’re going to visit or avoid. “What ethical travel really means is being conscious of the people and the environmental conditions at a destination,” says David Fennell, a professor in the department of recreation and leisure studies at Brock University, “and not to put yourself above people at that destination.”

For Newsham, that meant giving something back: cash. What you give back, or how you give back, or even if you give anything back at all, will depend on your own ethics and your understanding of the world. For Newsham and Greenwald, projects like Backpack Nation spread good will and opportunity by helping people build toilets, buy farm animals, and fund small organizations. Others are more skeptical of travel philanthropy. “When you have well-meaning Americans showing up in some village with a few hundred dollars,” says Sustainable Tourism author David Weaver, “there will be no shortage of opportunists trying to get ahold of it for their own personal benefit. Unless it’s mediated by a very good organization, it’s almost definite that the money will be misused.”

Traveling ethically may soon become easier if good certification schemes for sustainable travel such as Green Globe 21 become more common. But until then, travel with your eyes open. “Ethical travel can be summed up in one word,” says Greenwald. “Awareness.” Educate yourself before takeoff and keep your mind open upon landing—and have fun. “The ethical trip is the trip where money goes back into the local environment and helps people really come out of poverty,” says Tourism Concern’s Barnett. “The enjoyable ethical trip is where you also have fun and learn lots and relax and do whatever gives you a good holiday.”