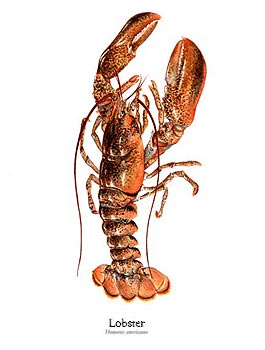 Lobster, a quasi-delicacy that in our times sells for up to $50 per crustacean, was once, strange to say, considered a pauper’s food. In colonial North America, it was most commonly found in the dinner troughs of pigs, cows, and goats, its shells ground up and scattered over the rest of the farm as manure. William Wood, a British historian visiting Canada’s Newfoundland in the early 17th century said dismissively of local lobsters: “Their plenty makes them little esteemed and seldom eaten [except by the Indians who] get many of them every day for to baite their hooks withal and to eat when they can get no bass.”

Indeed, it’s no exaggeration to say that people were downright ashamed to eat lobster. “Lobster shells about a house are looked upon as signs of poverty and degradation,” wrote American observer John Rowan in the mid-19th century. Peddlers in Portland, Maine carried lobsters around in wheelbarrows, selling them on the street to working class Irish immigrants. In one Massachusetts town, a group of indentured servants became so upset at their lobster-heavy diet that they took their masters to court and won a judgment protecting them from having to eat it more than three times a week.

It was the abundance of lobster that made it boring, a function of its overwhelming numbers off the Atlantic shores of Canada and New England and the ease with which they were caught. Children could drag a fishhook tied to a stick along coastal waters—a far cry from today’s deep-water traps—and bring a bucketful home for dinner. Some contemporary Canadians remember kids from poor towns, as late as the 1940s, trading lobster sandwiches for peanut butter and jelly in the school cafeteria.

Historians collect lobster accounts from colonial-era books, news clippings, and government documents. But today an unconventional historian is adding another source to the ranks. Rather than study scientific research, oceanographer Glenn Jones pores over restaurant menus, many of them hundreds of years old.

For the last five years, Jones and his team of researchers at Texas A&M University have been piecing together decades of data on everything from clams casino to boiled salmon to trace the shape of fisheries history. “Data on landings and prices only go back to the 1950s,” says Jones. “The information from the menus allows us to bootstrap almost 100 years back in time.” Jones has examined over 200,000 menus, never before perused for their historical import, at public libraries across the country.

The results of the study, which will be released officially later this year, illuminate much more than fish populations; socio-economic patterns, cultural eating habits, and geographic cravings are all revealed.

Lobster first appeared on menus in the 1850s and 60s, as a bargain dish in the salad section–the going rate was half that of chicken salad. It got its first big break commercially with the introduction of the cannery. In Maine in 1841, America’s first canning factory hopefuls hired a Scottish canner to set up an assembly line of boilers, claw breakers, tail pickers, and shell sweepers. At first the canners had difficulty convincing fishermen to catch lobsters and an even harder time persuading shop owners to buy the canned goods. Little by little, more canneries sprouted up along the Maine coast and by 1870 1,200 lobstermen were providing 23 canneries with enough lobster to put out two million cans of the crustacean per year.

But the canning heyday was short-lived. In the beginning, the lobsters dumped into vats of boiling water weighed 3 to 6 pounds each. About one to two lobsters were needed to fill every one-pound can. Smaller lobsters were simply thrown away. In just ten years’ time, however, a three-pound lobster was but a faint memory. Fishing practices had become so aggressive that lobsters couldn’t survive long enough to grow beyond two pounds. Now it took ten or more younger lobsters—many which had never reproduced— to produce a one-pound can. Still, wholesale lobster sold for just 11 cents a pound, while Boston baked beans went for 53 cents a pound. The cost of shelling outweighed the profits from the meat, pushing many canneries out of business.

At the same time, upper-class vacationers from urban points south began flocking to Maine in summer to enjoy the fresh country air, ocean views, and “exotic” seafood. As canneries dwindled, entrepreneurial restaurateurs were thinking up new ways to market the shrinking species. The smaller one- to two-pound lobsters, they discovered, were just the right size to fill a dinner plate. Lobster soon took on royalty status, crowned with butter and herbs, served upon a throne of silver lined china.

When the “fashionable visitors” returned home to Boston and Philadelphia in August, they continued to crave baked clams, fried cod, and fresh boiled lobster. The advent of refrigeration and ice packing allowed fishermen to ship live lobsters along the east coast and as far as Chicago, St. Louis, and even England, where they sold for ten times the original price. Once just a stomping ground for swine, lobster was the culinary craze of the times.

As tourists and wealthy socialites gobbled up tails and claws, it became increasingly difficult for lobstermen to pull their cash catch from the ocean. With the decrease in supply, the price for the now prized dish skyrocketed. Colin Woodard describes the boom in The Lobster Coast: “[A]verage per-pound prices quadrupled between 1889 and 1898, then jumped again in 1904. Between 1905 and 1929, Maine lobstermen increased the number of traps they used by 62 percent and fished over ever-longer seasons, but their catch fell by 28 percent. Only the ever-increasing prices kept an economic disaster at bay.”

Lobster prices hit their first peak in the 1920s, when the going rate was about the same as today’s. But with the Depression, the luxury lobster market took a dive. No one could afford the dish in restaurants, so the lobster was demoted back to the canneries to provide a cheap source of protein for American military troops. Jones marvels, “In 1944, soldiers sat in foxholes in France eating lobster.” Bad times made it easier to get fishermen to abide by conservation laws and the dwindling lobster population was allowed to recover slowly in step with the U.S. economy.

As the decades rolled on, the American palate remained partial to meat and potatoes for the day-to-day, but special occasion lobster meals at fancy restaurants fetched a handsome price once again. From the ‘50s to the ‘70s, consumer demand rose and Homarus americanus was again plagued by overfishing, sending long-term supply in the opposite direction, and prices soared.

The industry has since evened out, in both fishing practices and menu prices, but Glenn Jones is not so sure history isn’t poised to repeat itself in the near future. On today’s menus, four to five pound lobsters appear once again, indicating the opening of deeper waters, 200 miles offshore. “You can expect to see what happened to the inshore fishery happen again offshore,” Jones warns. “Fisherman will go after lobster that make money, capacity will exceed supply. In five to ten years, those big lobsters will be gone.”