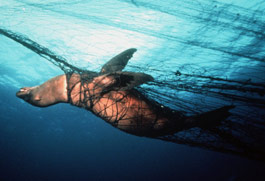 Q: What is bycatch?

A: Bycatch refers to fish and other marine life caught “incidentally” in the pursuit of another species. Animals caught as bycatch are not generally sold or kept for personal use. Among the species caught in this way are sea turtles, dolphins, seals, sharks, swordfish and whales. Seabirds often drown when they snatch baited hooks and are pulled under water.

Some fishing methods are selective and take little bycatch; other ways of fishing take a heavy toll. Catching shrimp in trawl nets can kill up to 10 pounds of other animals for each pound of shrimp.

Q: How big a problem is it?

A: According to the United Nations Food and Agriculture Organization, one in four animals caught in fishing gear dies as bycatch, meaning that each year millions of animals are killed.

Q: What are some of the consequences?

A: Bycatch can decrease the sustainability of fisheries in several ways. If the quantity fish killed is not monitored adequately, it becomes difficult to assess the status of stocks. Bycatch a wasteful use of living marine resources, because juvenile fish that are killed cannot be used to contribute directly to the growth of that stock and to future catch. (Young fish that could rebuild depleted populations if they were allowed to grow up and breed.)

Animals thrown away have important roles to play in marine food webs. By killing these animals, we’re taking food away from tunas, salmon, swordfish, dolphins, sea lions and other ocean wildlife.

Q: How do fishermen feel about bycatch?

A: Fishermen don’t want to haul in bycatch, as it wastes their time, wears out their gear, and can be costly if consumer activism forces them to change their methods or even the species they fish.

Q: What’s being done about it?

A: In the US, the regional fishery management councils and NMFS have taken a variety of actions, including research to develop better methods for monitoring and reducing bycatch, outreach programs to explain the problem and search for solutions, and regulatory actions to monitor and decrease bycatch.

Q: What about legislation?

A: Congress has addressed bycatch in the Magnuson-Stevens Fishery Conservation and Management Act (MSA), the Marine Mammal Protection Act, and the Endangered Species Act.

Amendments in 1994 to the Marine Mammal Protection Act (MMPA), made a number of changes in the regulations governing bycatch.

Q: Why hasn’t the problem been solved before now?

A: One reason might be that the problem is complex. An action that is taken to reduce the bycatch of one species can increase that of another, or an action that is taken to decrease one type of bycatch mortality can increase another type. For example, some “dolphin-safe” fishing methods are not safe for sea turtles, sharks, wahoo, mahi-mahi and young tunas. These animals, and many others, die at staggering rates now that purse seiners are working to avoid dolphins.And bycatch is a contentious issue because actions to reduce bycatch mortality typically change the distribution of the net benefits from the fisheries.

Q: What can ordinary people do to make a difference?

A: A lot. Think of dolphin-safe tuna. When hundreds of thousands of dolphins died as bycatch in purse seine nets designed to catch dolphins, concerned consumers forced the tuna industry to change.

Q: Where can I learn more about this?

A: To start with, surf over to The Ocean Conservancy, the Monterey Bay Aquarium, or the National Oceanic and Atmospheric Agency.