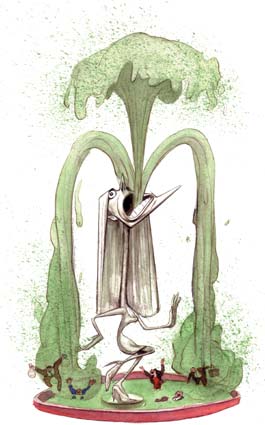 In America’s pop poli-culture, she’s the Mother of All Partisans, thriving on whatever turn of phrase might most piss off the Democrats and/or “liberals” (and sell as many books as possible). For their part, her targets—although they don’t make as much money at it as she does—are all too happy to sink to her depths of crass depravity in response.

Call it the Coulter Cycle, and call it vicious. In September, I announced on my blog that I’d be debating Ann Coulter on an upcoming radio show, and was immediately showered with e-comments, most of them from lefties tired of being kicked around and publicly humiliated by the right-wing political cabal that has usurped virtually every inch of bandwidth on the American broadcast airscape since the Reagan-led dissolution of the Fairness Doctrine in the mid-’80s. Many were eager to tell me that Coulter, to paraphrase Austin Powers, “is a man, baby,” and pointed to a telltale prominent Adam’s apple (the only part of the anatomy, one emailer, a self-described speech therapist, helpfully pointed out, that can’t be reshaped in a sex-change operation). Others referred to her as simply “mAnn Coulter” or, when eloquence deserted them entirely, just “skanky meth whore.” Such is the exquisite refinement of American political discourse in the early 21st century.

Then, into this spectacle of spittle and disputum came an email from the gentlemanly Daniel Borchers, expressing that he was (and notice the archaic restraint) “highly critical of Ann Coulter.” Borchers is, if you will, the anti-Coulter, a position he arrives at from a decidedly unexpected corner. He loathes the queen of contumely not because he’s a liberal who’s taken the bait, but because he’s a conservative who thinks she and her kin are a disgrace to the conservative movement.

Borchers works for a labor-management organization dealing with health and safety issues, headquartered in Washington, D.C. He fashions himself an old-school conservative, and has been on a singularly lonely fight for true conservative values and policymaking in America for quite a few years. In 1996, he began publishing a newsletter called BrotherWatch, to combat what he describes as the “growing extremism within the Conservative Movement.” It runs stories about and interviews with personalities from across the broad political spectrum, “from Alan Keyes to Alan Colmes,” says Borchers.

His title as editor earned him media credentials at the annual Conservative Political Action Conference (CPAC), along with permission to distribute his newsletter to attendees. That is, until he actually did so. In 2002, he showed up carrying a special anti-Ann edition of BrotherWatch, which called Coulter on the carpet for, among other things, the “mass of contradictions which abound in her life” and for the “extremist” positions that, following the 9/11 terrorist attacks, seemed to push the “acid-tongued blonde” toward a descent “into madness.”

“BrotherWatch cannot abide her rhetorical excesses and ideological extremes, and the underlying emotional cauldron of hatred which animates so much of what Ann Coulter says and does,” Borchers wrote. “Nor can we tolerate the consequential dysfunctional behavior which is manifested as hypocrisy and mendacity, hate-mongering and abuse of power. These are traits which Coulter exposes in others, traits which no one who calls themselves ‘conservative’ should emulate.”

The issue depicts Coulter on the occasion of the death of her friend Barbara Olson in the plane that crashed into the Pentagon, and decries her disinterest in taking the moment to reflect on Olson’s life of “Christianity, spirituality and graciousness,” preferring instead to “scrounge through the wreckage, find a piece of her…and beat Hillary Clinton over the head with it.”

When the organizers of CPAC caught on to Borchers’ subversive content, they attempted to confiscate BrotherWatch and escorted Borchers out of the hall and back to his Nissan Altima. Coulter has been a perennial star of CPAC, which has wanted nothing to do with Borchers from there on out. In 2003 and 2004, he was denied not only media credentials but even regular admission to the conference. He managed to slip past the gatekeepers in 2005 as a paying member of the public. All this, he says, “merely for expressing my dissent.”

Now Borchers is at work on a documentary film titled The Truth About Ann, due out in June to coincide with the anticipated release of Coulter’s next book. Early press materials promise the film “exposes the extremist nature of Conservatism’s preeminent diva and reigning political icon.” Employing liberal doses of Coulter’s many media appearances and miles-long paper trail, it promises to reveal how her brand of “‘New McCarthyism’ is poisoning millions of minds.”

Borchers is starting to produce some smaller PowerPoint presentations highlighting various examples of Coulter’s opportunism. His first presentation, “The Gospel of Ann,” displays Coulter’s “jaw-dropping expression of faith in God…a faith which otherwise seems so empty in everything Coulter does.” Borchers says Coulter’s “track record of practicing what she preaches is pretty dismal.” He hopes the presentation will “call to the attention of fellow Christians (left and right)” the anti-Christian tendencies and hate-speech practices of those, like Coulter, who declare their fealty to the conservative movement while eroding its tenets.