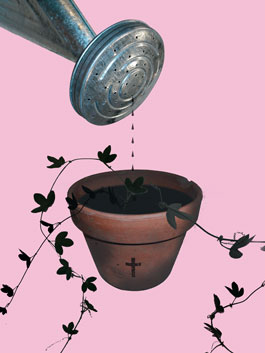 
“When you choose to work with the National Christian Foundation, you get a partner that shares your Biblical perspective on giving…. We teach [donors] valuable ways to invest dollars into God’s Kingdom, rather than surrender those dollars to the federal government.”

IN 1982, TERRY PARKER, a seasoned Atlanta evangelical and lawyer, created the National Christian Charitable Foundation. Parker’s vision grew into a nationwide premier support network for Christian charities. His method was so cutting edge that he sought a ruling from the Internal Revenue Service to ensure it was legal. Nearly 25 years later, Parker’s organization, now known as the National Christian Foundation (NCF), has become a leading financial delivery system to the evangelical movement, having channeled nearly $1 billion to ministries, schools, conservative think tanks, and political activists around the country.

Tucked next to two large hospital complexes on the northern perimeter of Atlanta, NCF operates so far under the public radar that even Parker’s hometown newspaper, the Atlanta Journal-Constitution, has never featured it in an article. But, with more than $450 million in assets, NCF is the sixth-largest donor-advised fund in the nation. As such, NCF serves as a conduit through which benefactors can funnel cash, real estate, stocks, and other valuables to the charities of their choice—and earn a bigger tax break than by giving directly to a private foundation. As a bonus, these funds virtually guarantee anonymity for the benefactor. It usually takes a minimum of $10,000 to open a donor-advised fund with NCF. Although the contributor does suggest where the money should go, the final decision rests with NCF.

PARKER’S BLUEPRINT FOR the NCF grew out of his law practice arranging adoptions for children of unwed mothers and setting up charities for philanthropists. In 1982, an individual who wanted to give a sizable amount of money away, and yet have some degree of control over its ultimate destination, came to Parker for help. “He was looking for a giving alternative with a Christian focus,” Parker says. “It occurred to me upon consulting with him that the creation of a Christian Community Foundation would not be that difficult.” Parker didn’t invent donor-advised funds, but he was the first person to adapt them to religious fundraising.

From 1982 until the mid-1990s, the foundation’s growth remained modest. But during 1998, the first boon year for NCF’s donor-advised funds, $263 million poured in. Parker credits the growth primarily to the group’s ability to make it easy for would-be donors to contribute noncash gifts, such as real estate, bonds, and other assets. In recent years, Parker’s organization has grown exponentially, in part by creating a nationwide network of 27 local offshoots. These groups are able to tap into NCF’s expertise and draw donors with complex financial assets. In 2004, NCF paid out $170 million in grants—roughly one-and-a-half times the amount it disbursed the previous year.

In 2003, the last year for which records are available, NCF’s biggest donations were $6 million to the Christian Stewardship Foundation, a local offshoot in the Milwaukee area;

$3.5 million to the Foundation for Christian Stewardship, a local offshoot in Irvine, California; $3 million to Dawn Ministries; $2.7 million to Focus on the Family; $2.5 million to Helping Hands Ministries; and $2.4 million to Campus Crusade for Christ International. Conservative Christian legal powerhouses, the Alliance Defense Fund and the American Center for Law and Justice, received $663,100 and $137,850 respectively. The Discovery Institute, bastion of Intelligent Design, got $176,000. NCF’s largesse has also enriched small charities, such as Helping Hands for Single Moms and the Saint Dismas Jail Ministry. Then there are those among NCF’s list of grantees that might not readily be associated with the foundation’s pledge to exclusively support groups that “further the gospel of Jesus Christ.” These include the American Conservative Union Foundation, the Heritage Foundation, the Cato Institute, Free Congress Foundation, Accuracy in Media, the Federalist Society, and Judicial Watch, among others.

Charity Navigator, the Consumer Reports of the philanthropy world, gives NCF its top four-star rating for efficiency. The Chronicle of Philanthropy notes that it pays out about 40 percent of its assets each year—an astonishing rate, considering the average foundation annual payout is around 16 percent. But donor-advised charitable funds across the board are coming under increased scrutiny by the IRS. Philanthropy watchdogs have also raised questions about foundations that give lucrative business to individuals who serve on their boards—something that NCF does routinely.

Until recently the NCF board consisted of just three directors: Parker plus two other well-known evangelicals, authors/financial planners Larry Burkett and Ronald Blue. (Blue ran Gary Bauer’s 2000 bid for the presidency.) As part of its 2004 annual financial report to the IRS, the group notes payments of $464,595 to Blue’s firm for services rendered. But Blue’s company wasn’t the only one linked to a director who profited from business with NCF. During 2002, Parker’s law firm received about $180,000 for services rendered, in addition to his $150,000 NCF salary. Law firms connected to two of the foundation’s salaried officers received about $155,000 for work performed from 2002 to 2004.