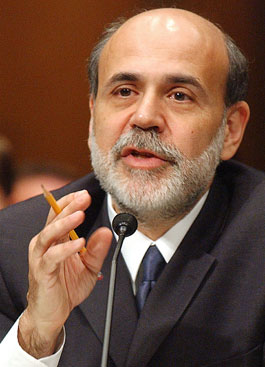 Bernanke is known as a model professor. He has a careful mind, an open manner, a not-very-partisan disposition. (He helped recruit Paul Krugman to Princeton, after all — did Bush realize this?) He has written about monetary theory for years; his views are known and settled. Thus the transition is also partly from obscure prose and flexible belief to clarity and conviction.

It sounds great. But at least since Mary Shelley, wise voices have warned that academics in the grip of big ideas can be dangerous. There is the awful temptation to test one’s views. And if you happen to be chairman of the Federal Reserve, you’re using the entire country as your lab.

Bernanke’s big idea is “inflation targeting” — the notion that the Federal Reserve should set a numerical inflation objective and pursue that over all other goals, raising rates when inflation exceeds the target and cutting them when inflation falls below it. (He coauthored a book on this in 1999; I gave it a harsh review.) This policy would depart from the Fed’s legal mandate, which requires it to pursue “full employment” and “balanced growth” in addition to “reasonable price stability.” Bernanke’s rule would also force changes in current practice. Though under Greenspan the Fed always cited the threat of inflation when raising interest rates, in fact, it acted for a wide variety of reasons, stated and unstated; one of Greenspan’s defining traits was his unwillingness to be pinned down to any simple policy rule.

Sometimes inflation targeting is harmless. In 2002, Bernanke used it to help argue for lower interest rates. He felt that after 9/11 the danger was of deflation, which hurts those with debt, like most homeowners. There was really very little chance of deflation in 2002 (overall wages and prices in advanced industrial countries rarely decline); the real risk was of a financial panic. Targeting helped sell the correct policy — lower interest rates — but since the forecast was spurious the episode was no great proof of Bernanke’s theory.

Inflation targeting would be much more dangerous if applied today. Recently we’ve seen a small spate of inflation, most of which is due to rising oil prices brought on by the war in Iraq, the hurricanes along the Gulf Coast, and plain old speculation. Suppose the Fed were following a 2 percent inflation target and the “oil shock” pushed overall price increases up to 3 or 4 percent. Should the Fed raise interest rates in response?

First, assume it did. Higher oil prices have two effects: They push up prices, and unless you’re an oil company, they hit corporate profits (check out the news from Ford and GM). Higher interest rates also push up prices, and, unless you’re a bank, they also hit your profits. The result: stagflation — inflation and rising unemployment at the same time. Raising interest rates after an oil shock was exactly the mistake the Fed made following the OPEC shocks of 1973 and 1979. In recent testimony before Congress, Bernanke tried to escape this trap, pointing out that price increases haven’t yet passed from oil into the rest of the economy. So maybe he’s for targeting core inflation — price increases with the two “volatile” components of oil and food taken out. But here’s the problem with that: Inflation has to start somewhere. Usually it shows up first in sectors where prices are, well, volatile. Only later does it move to sectors like government procurement, where prices change slowly. So if the target is shifted from actual inflation to core inflation, the Fed would be saying, “We’ll fight inflation, but not until it’s really entrenched.” And if you wait until then, you’ve got a serious problem.

Bernanke, however, believes that targeting would help fight inflation another way: by sending a clear, transparent signal that would affect what economists call “inflation expectations.” The idea is that workers and businesses don’t just wait to react to higher interest rates. Rather, they set wages and prices partly with an eye to the Fed’s policy stance, which they can read about in the newspapers or watch on TV. Thus, if they understand that the Fed plans to be a tough inflation fighter, then supposedly they will keep their wages and prices under control, so as to avoid the punishment of higher interest rates that they rightly fear.

This idea has a pedigree, and curiously enough, some of it is German. In arrangements that endured until about a dozen years ago, the Bundesbank negotiated in effect by threat and counterthreat with the largest trade union. If wage demands were too high, then the bankers would raise interest rates. The deutsche mark would climb, and the metalworkers, who produced much of Germany’s exports, would lose competitiveness and their jobs. An atmosphere of credible threat, in other words, helped keep the workers in line.

But the German system worked (for as long as it did) because the union making the key wage decision also had the most to lose. Higher interest rates, as they affected the exchange rate and foreign trade, would hit them hardest and first. By moderating wage demands, they could keep Germany competitive and prosperous as a whole, and also keep their jobs. So they had something to gain by making a disciplined choice.

In the United States, we don’t have a centralized bargaining process, with a strategic union faced off against the central bank. Here the signal would have to be transmitted by the central bank to the public mainly through the press, and implemented in very decentralized labor markets.

I fear I had some small hand in this idea. Thirty years ago, as a young staffer on the House Banking Committee, I organized the first regular hearings on the conduct of monetary policy — what later became the Humphrey-Hawkins process — in which the Fed chair comes before Congress every six months. Before the H-H hearings, the Fed never wanted to speak to the American people. The chairman was typically an ineloquent bureaucrat whose name the public hardly knew. Fed governorships were sinecures. The Humphrey-Hawkins hearings started as a way for Congress to open things up, against vigorous resistance. They have since become a national theater of which the chairman is invariably the star. They have given the Federal Reserve a public presence that would have astounded central bankers anywhere in the world a generation ago.

As a result, both monetary policy and the Fed chairmen themselves are of a higher caliber than when I was a boy economist. (Arthur Burns, the first one I had to deal with, was insecure and a bit of a bully.) Federal Reserve governors — the other members of the board — are also better, and the Federal Open Market Committee, which decides interest-rate changes, has become a place for serious people. I’d like to build on this progress by putting the FOMC meetings on live TV. (Fed-Span, how about it?)

But even such transparency wouldn’t mean that the public would come to think and act just as the Fed chairman might like. First of all, the general public is busy; people do not waste that much time following the economic news. But even if they did, rational workers wouldn’t heed the Fed’s signal. Everyone is always better off, individually, taking a wage increase than forgoing it, for then the cost of a tight policy is shifted to someone else. There is, in other words, a fatal lack of solidarity in our system.

And do oil companies — which recently posted record profits on the strength of record prices — care about the threat of higher interest rates? Of course not. They know that burden will hit elsewhere: on businesses planning investments, on households deciding whether to buy a new house or a new car. What would oil companies fear? Sales from the strategic reserve, mandatory conservation, a windfall profits tax, even (gasp) price ceilings to curb speculation. Not to worry, though, Bush won’t do any of that.

Of late, oil prices have begun to fall, so this all might seem academic. But oil supply shocks are likely to revisit us with greater and greater frequency. And so Dr. Bernankenstein has a problem. He can unleash his monster, drive up interest rates, and make things worse. Or he can stand down, demonstrating to instant critics that he lacks the courage of his convictions.

How Bernanke manages such dilemmas will probably determine his fate. As a former professor appointed by a failing president, he hasn’t got a lot of ready-made mystique. He may feel pressured to implement his pet theory to prove that he is brave and decisive. But that’s a mug’s game. If you need to prove it, then you aren’t. What Bernanke really needs to prove is that he doesn’t have anything to prove. And it may be that the key to showing character, spine, and judgment — all those good things — will lie in not following through on his ideas. Indeed, the path of true wisdom may require finding a creative excuse to do nothing at all.