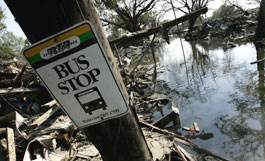 On Halloween night, New Orleans will be very, very
dark. Well over half the homes on the east bank of
New Orleans sit vacant because they still do not have
electricity. More do not have natural gas or running
water. Most stoplights still do not work. Most
street lights remain out.

Fully armed National Guard troops refuse to allow over
ten thousand people even to visit their
property in the Lower Ninth Ward neighborhood.
Despite the fact that people cannot come back, tens of
thousands of people face eviction from their homes. A
local judge told me that her court expects to
process a thousand evictions a day for weeks.

Renters still in shelters or temporary homes across
the country will never see the court notice taped to
the door of their home. Because they will not show up
for the eviction hearing that they do not know about,
their possessions will be tossed out in the street.
In the street their possessions will sit alongside an
estimated 3 million truck loads of downed trees, piles
of mud, fiberglass insulation, crushed sheetrock,
abandoned cars, spoiled mattresses, wet rugs, and
horrifyingly smelly refrigerators full of food from
August.

There are also New Orleans renters facing evictions
from landlords who want to renovate and charge higher
rents to the out of town workers who populate the
city. Some renters have offered to pay their rent and
are still being evicted. Others question why they
should have to pay rent for September when they were
not allowed to return to New Orleans.

New Orleans, known for its culture and food and
music, is now pushing away the very people who created
the culture and food and music. Mardi Gras Indians
live and paraded in neighborhoods that sit without
electricity or water. The back room cooks for many of
the most famous restaurants cannot yet return to New
Orleans. Musicians remain in exile. Housing is
scarce and rents are soaring. Over 245,000 people
lost jobs in September. Public education in New
Orleans has not restarted. The levees are not even up
to their flawed level in August.

Dr. Arjun Sengupta, the United Nations Human Rights
Commission Special Reporter on Extreme Poverty,
visited New Orleans and Baton Rouge last week. He
toured the devastated areas and listened to the
evacuees still in shelters and those living out of
town with family.

Dr. Sengupta described current conditions as
“shocking” and “gross violations of human rights.”
The devastation itself is shocking, he explained, but
even more shocking is that two months have passed and
there is little to nothing being done to reconstruct
vast areas of New Orleans. “The US is the richest
nation in the history of the world. Why cannot it
restore electricity and water and help people rebuild
their homes and neighborhoods? If the US can rebuild
Afghanistan and Iraq, why not New Orleans?”

The longer the poor and working class of New
Orleans stay away, the more likely it is that
they’ll never return. That, some say, is exactly what
those in power in New Orleans and Louisiana and the US
must want. Otherwise, why are they making New Orleans
a ghost town?