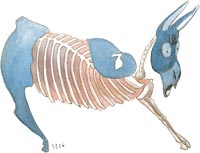 Listening to the Democratic nominees during the 2004 presidential campaign, it often seemed as if they were ashamed to belong to their own political party. In his acceptance speech, John Kerry boasted that he “broke with many in my own party” to support a balanced budget and ridiculed the idea of “Democratic values” and “Republican values.” John Edwards gave a rousing concession speech — but didn’t even bother to invoke the party’s name.

The other side never makes that mistake. The day after the election, Dick Cheney, one of the savvier, as well as most savage, politicians in America, began his brief victory remarks by thanking his fellow Republicans and saluting them for piling up larger majorities in both houses of Congress. In doing so, he highlighted a key difference between GOP partisans and the Democrats they had just routed: Today’s Republican Party is in large part the creation of a highly disciplined and motivated movement. Since the rise of Barry Goldwater in the early 1960s, conservative activists have worked diligently to fuse their own goals with the success of their party.

By contrast, even the fervor of this election couldn’t obscure the fact that in much of America, the Democratic Party was a glittering shell. Neglected amid the rush to explain Kerry’s defeat was the simple fact that he didn’t have a strong, broadly rooted party behind him. Certainly, the grim-faced senator lacked charisma, felt uncomfortable talking about God, and was crippled by his region and his past as a war protester. But no candidate runs by himself. The party is the rock on which he or she stands or falls.

Alas, the Democrats in 2004 were more like a collection of pebbles. Few of the volunteers who poured in to help defeat George W. Bush had worked in a presidential campaign before or were committed to the party itself; most were loyal to a particular cause, from gay rights to global warming. Kerry’s managers showed great zeal at raising money and getting movie stars to stump and rock musicians to sing for their man. Yet George Soros, Ashton Kutcher, and even Bruce Springsteen also reinforced the GOP’s caricature of the Democrats as a party that caters more to rich celebrities than to ordinary people.

It wasn’t always this way. Through most of its history, the Democratic Party was the natural home of hard-pressed, unglamorous America — manual workers, dirt farmers, small businessmen just a bad month away from bankruptcy court. Known during the 19th century simply as “the Democracy,” it all but invented the repertoire of mass politics with such innovations as storefront offices, precinct captains, and torchlight parades. The party embraced immigrants, Catholics in particular, who were set upon by “anti-Papist” mobs and moralists who tried to outlaw their saloons. Most Democratic stalwarts were male, and nearly all were white. But they still proudly considered themselves the bone and sinew of a “people’s party.”

From the end of the Civil War to World War I, the GOP took hold of the fastest-growing, most prosperous areas of the nation, and Democrats seldom won the presidency. Their core electoral base was in the former Confederacy, a fact that tarnished their claim to be the defenders of the hardworking masses against the privileges of a few. But that changed with the Great Depression, when a booming labor movement — which welcomed workers of every race and religion — re-created the party in the industrial heartland with its numbers and insurgent spirit. Cities and counties that hadn’t voted Democratic in decades, if ever, became mainstays of the coalition that elected FDR and Truman, JFK and Johnson, and a stream of governors, senators, and local officials. This sea change took hold in steel towns like Aliquippa, Pennsylvania, the auto capital Detroit, and such commercial metropolises as San Francisco and Philadelphia. It was the Democrats’ golden age. And the party’s officeholders kept faith with their constituents. They enacted policies that made workplaces more democratic and the elderly more secure, ended official Jim Crow, and lifted millions of Americans into the middle class.

Since the 1960s, the decline of organized labor has eaten away at the Democratic Party’s populist foundation. Strong unions didn’t just furnish Democrats with an ample supply of precinct workers. They established social class, rather than faith or “moral values,” as the crucial difference between their party and the GOP. Republicans, the venerable party of big business, would surely not have carried West Virginia in 2004 (or 2000) by vowing to defend the Second Amendment and stop lesbian weddings if the United Mine Workers still reigned in the coal-fields. The ebbing of labor’s clout has also made Democrats underdogs in Missouri and Ohio, states they routinely carried back in the glory days.

Every campaign season, liberal idealists and political pros — admakers, pollsters, and fundraisers — keep the Democratic edifice upright and presentable. But the party still has not found a constituency with the size, geographic spread, and resources to take labor’s place.

Until 2004, most progressive activists didn’t seem particularly concerned about this. Many voted for Democrats with a yawn and a shrug, if not a curse. Others dithered with third parties or imagined that electoral politics had little to do with everyday life. We can thank George W. Bush for blasting that illusion.

The upsurge of progressive activism in the 2004 campaign was quite thrilling to behold. First-time activists worked alongside veteran organizers to make the case against the incumbent, register new voters, and get them to the polls. But, like any new movement, this one was a freelance affair, haphazardly coordinated and badly in need of the direction only a strong, motivated party can provide.

In Ohio, which decided the election by fewer than 140,000 votes, the extra-party organizations had to do most of the work themselves. Not a single Democrat holds statewide office there; the only Buckeye icon Kerry could bring to his rallies was John Glenn, the elderly space hero who retired from the Senate back in 1998. The campaign did pay $500 a week to canvassers who helped turn out a big vote in the black neighborhoods of Cleveland. But a crack organizer from Los Angeles spearheaded the effort, not local Democrats.

I spent Election Day making calls from my Washington suburb to inner-city Clevelanders whom the Democrats believed to be currently registered. The list I was given was rotten with the deceased and the departed. At least half the phone numbers on it were wrong. By contrast, the Bush campaign in Ohio relied on some 85,000 in-state volunteers whose sole job was to contact their neighbors and ensure that they got to the polls and voted right. You can do the math.

The need to redemocratize the Democratic Party is as urgent as the task of shoring up its tattered infrastructure. Polls show that a majority of Americans disagree with President Bush on critical domestic issues: They want to guarantee health insurance to every citizen, they oppose turning Social Security over to the vagaries of the stock market, they think the minimum wage is too low, and they want to boost teachers’ salaries. Only when the debate turns to terrorism and homosexuality do voters favor the GOP. Yet the Democratic Party has done little to show ordinary Americans that it desires their ideas and participation as much as their votes. In states that voted solidly for Bush, knots of liberal activists can be found mostly in college towns and capital cities, listening to National Public Radio, reading the New York Times, and shuddering at Bible-spouters in the outer suburbs and on the farms. Meanwhile, Republicans sew up veterans groups, hunters, and small businesses, as well as white Protestants. Judging from the polls, they are even starting to attract upwardly mobile Hispanics who regularly attend church.

The United States remains a nation with an evangelical soul, a fact that liberals ignore at their peril. But it is also a nation whose citizens revere volunteerism and local decision making and mistrust politicians who craft their ads and speeches to fit the latest survey. A reborn Democratic Party would draw ideas and energy from states and local communities, enlisting candidates and organizers who share the values and language of the people whose votes they’ll be seeking. It could sponsor comedy nights and dance parties and debates about whether one can support gay marriage and still be a good Christian; throw street festivals at which every immigrant society, sportsmen’s club, church, temple, and mosque feels welcome; offer a place for seniors to meet and for community organizers to gather. In a word, it could act a great deal more like the people’s party of old, and less like a traveling circus that folds its tents after the first Tuesday in November.

Progressives who dedicate themselves to building such a party may not elect the next president. But they will be matching their political dreams and electoral aspirations to institutional reality. They will also dispel the toxic notion that they are cultural elitists who think about fleeing America whenever conservatives win a presidential election. They might even make the Democracy live up to its name.