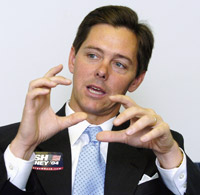 When the casino-rich Coushatta tribe of Louisiana began a lobbying blitz in 2001 to block three other tribes from opening competing casinos, they hired two of Washington’s top influence brokers, lobbyist Jack Abramoff and public relations whiz Michael Scanlon. But Abramoff and Scanlon — who are now at the center of a Washington scandal sparked by the multimillion-dollar fees they charged several tribal clients — knew that to win any lobbying campaign in the South, they needed help mobilizing social and religious conservatives. So they turned to one of the best-known names on the religious right: Ralph Reed. Since his departure as head of the Christian Coalition in 1997, Reed has emerged as a highly sought-after corporate consultant, putting his organizing skills and political connections to work for business interests — even those that conflict with his followers’ conservative beliefs.

On the casino issue, Scanlon’s company, Capitol Campaign Strategies, paid Reed to help assemble anti-gambling coalitions in Louisiana and Texas. Among other things, those coalitions backed a lawsuit filed by Texas’ attorney general that early in 2002 succeeded in shutting down two Texas casinos that posed competition to the Coushattas’ highly lucrative operation.

Reed says he has not wavered from his anti-gambling convictions and points out that his company was paid by Scanlon’s firm, not the tribe. “We have never been retained by a casino to serve their interests,” he says. But antigambling activists say that argument doesn’t wash. “When you get paid big money, it’s got to be gambling money,” says Tom Grey, a Methodist minister who runs the National Coalition Against Legalized Gambling. “Ralph Reed with all his sophistication should have known where the money came from.”

The gambling work is just one instance in which Reed has used his credentials with the religious right to further his clients’ business agendas. Since its founding in 1997, his consulting firm, Century Strategies, has racked up millions in fees from companies
including Enron, Microsoft, Verizon, and other Fortune 100 companies, according to sources familiar with its client list.

Reed’s value to corporate America has been enhanced by his close ties to the Bush administration and especially to Karl Rove, the president’s chief political guru. Not long after Century Strategies started, Rove reportedly helped Reed land an Enron contract worth at least $300,000 to help build support for energy deregulation. Century Strategies did voter-mobilization work for the Bush campaign and the Republican National Committee in 2000; it has been retained again this year for similar projects. Reed has also been serving as Southeast regional coordinator for the Bush campaign, with responsibility for delivering Florida and four other Southern states. Bush campaign manager Ken Mehlman has called Reed “the guy who gets it done” in the South, especially in reaching out to evangelicals and other religious groups and advising the national campaign on strategy.

Reed’s political ties have allowed him to carve out a special niche among political influence merchants. “Ralph has cornered the market in corporate strategic communications and grassroots using his social conservative base combined with his personal communications skills and his influence in the Bush reelection campaign,” says lobbyist Scott Reed (no relation), who managed Bob Dole’s 1996 presidential campaign. “This is a unique role for a GOP operative that has huge value for corporate America.”

Among Reed’s clients is Channel One, a company that provides television equipment to schools in exchange for airing 10 minutes of news and 2 minutes of commercials daily. Prominent conservatives have blasted the company for exposing children to junk-food ads and explicit movie promos. In response, Channel One turned to Reed, who in 2002 helped the company deflect a proposed Texas Board of Education resolution that would have urged schools to jettison Channel One. Reed, who points out that Channel One also runs ads promoting abstinence and anti-alcohol messages, phoned several board members and dissuaded them from voting for the resolution, much to the dismay of conservatives like Phyllis Schlafly, a longtime critic of Channel One. “I’m surprised that any conservative would work for it,” Schlafly said. “They’re all advertising things that I wouldn’t want my children to buy.”

More recently, Reed has been retained for his grassroots clout by Verizon, which, along with other Baby Bell phone companies, has been fighting AT&T in a long-running and enormously expensive lobbying battle over access to one another’s markets. David Hoppe, a former aide to Senator Trent Lott who lobbied for Verizon, says Reed helped the company make contacts in the White House and garnered backing from big-name conservatives such as Grover Norquist, who heads Americans for Tax Reform. These contacts helped Verizon gain administration support for its position that local phone companies shouldn’t be required to lease their lines to long-distance carriers at discounted rates.

Reed also helped a powerful coalition of business groups, including Boeing and the Business Roundtable, to convince Congress to normalize trade relations with China — over the objections of many conservatives, who criticize China’s dismal record on religious freedom. Brian Lunde, a public relations executive who worked with Reed on the China issue in 2000, recalls that Reed was instrumental in persuading conservative members of Congress to support permanent normal trade relations with China, and that he helped write ads aimed at conservatives arguing that a closer economic relationship with China could improve human rights.

Yet some of Reed’s work, especially the anti-casino campaign he mounted with Abramoff and Scanlon, is causing increasing headaches for the 43-year-old consultant. Sources familiar with the tribal lobbying scandal say Reed raked in almost $4.1 million in 2001 and 2002 for that work, including $1.8 million from Scanlon’s company as well as about $2.3 million from a think tank called the American International Center, which was set up by Scanlon in 2001 and was funded in part by the Coushattas and another of Abramoff and Scanlon’s clients, the Mississippi Choctaws.

The payments have attracted the attention of the Senate Indian Affairs Committee, which for several months has been probing allegations that Abramoff and Scanlon engaged in improper lobbying activities and spending on behalf of the four tribes that paid them an astonishing $45 million from 2001 through 2003. The FBI and a federal grand jury are also looking into allegations involving potential illegalities in the work Abramoff, a major GOP fundraiser, and Scanlon, a former aide to House Majority Leader Tom DeLay, did for the tribes. (See also “Justice DeLayed,” p. 74.) Congressional investigators say they don’t believe that Reed himself did anything improper, but some political analysts say his association with Abramoff and Scanlon could tarnish his image and conservative credentials.

In the end, though, Reed remains attractive to corporate America for the same reason he became a star in GOP politics: He can turn embattled causes and candidates into winners. As chairman of the Georgia GOP in 2002, notes University of Georgia political scientist Charles Bullock, Reed stunned many observers by helping to get Sonny Perdue elected as Georgia’s first Republican governor in 130 years. “Corporations would look at someone who had so much success with campaigns that didn’t seem so salable politically,” Bullock says, “and might assume that Reed could use those same skills to mobilize support for their policy objectives.”