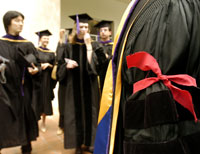 With the antiwar movement struggling to regain its preinvasion groove, the student activists of ’03/’04 turned their attention closer to home. From Ahnold to Ashcroft, ROTC to rap videos, the targets of protest were as diverse, and colorful, as the demonstrations themselves:

1. University of Puerto Rico, Mayaguez: When UPRM announced it was building a new, $150,000 Air Force ROTC facility on campus, dozens of activists from the Frente Universitario por la Desmilitarización y la Educación began what would become a six-month camp-in at the construction site. Calling on the university to invest in students not soldiers, 30 students also took over the Army ROTC building for 24 hours in January, redecorating it with antiwar murals. Victory came in March, when the university agreed to devote the new building to academic use and to refuse ROTC additional space on campus.

2. UCLA: Building a 10-foot-tall, 24-foot-long, PVC-pipe-and-cardboard version of Israel’s “separation wall,” UCLA activists in April brought a taste of the West Bank to West L.A. “Soldiers” also herded students through two checkpoints in the middle of Bruin Walk: one (with no line) for “Israelis” and another (with interminable delays) for “Palestinians.” “We want to show the reality of life for Palestinians living under Israeli occupation,” said student leader Alia Hasan. (In a counterprotest, one student posed as a “suicide bomber” to demonstrate why he felt the wall was justified.)

3. Spelman College: After students at this historically black women’s college learned hip-hop star Nelly would be performing on campus, they presented him with a challenge: defend his sexist videos or stay home. Nelly was a no-show, so Spelman’s Feminist Majority Leadership Alliance hosted teach-ins, attended by more than 500 students from Spelman, Morehouse, and Clark Atlanta, to debate the representation of women in rap. “I would have liked to ask him some questions,” said FMLA president Moya Bailey. “But I think we introduced the issue to a lot more people and really got them to think.”

4. California Community Colleges: “Don’t terminate community colleges!” demanded 5,000 junior college students as they marched on Sacramento this spring to protest Governor Arnold Schwarzenegger’s proposed 50 percent tuition hike. The students had reason to be angry: They were still reeling from a 2003 increase that has turned thousands of students out of the system. San Bernardino Valley College protester Stacey Lopez chided the Governator for raising tuition rather than taxes: “If our fees go up and people drop out, it’s going to be on him.”

5. Rutgers University: Rutgers students marshaled a small army to join the March for Women’s Lives in Washington, D.C., in April. Some 600 Scarlet Knights ventured from New Jersey to the Mall—the largest college contingent at the record-setting pro-choice rally. With signs proclaiming “Keep Your Rosaries Off My Ovaries,” the Rutgers clan marched in defense of Roe v. Wade and demanded that the Bush administration approve over-the-counter access to emergency contraception.

6. Suffolk University: Two hundred students wore “equality armbands” to protest Massachusetts governor Mitt Romney’s commencement address, while others with rainbow tassels on their mortarboards turned their backs. At least 500 students had unsuccessfully petitioned the school to disinvite Romney, who has led the charge to undo the state Supreme Court’s landmark ruling in favor of gay marriage. The governor’s address was delayed by a chorus of boos, and at least three vituperative protesters had to be escorted from the FleetBoston Pavilion ceremony by police.

7. University of Massachusetts: Unless you’re an engineering student from Lahore, you’ve likely never heard of the Student and Exchange Visitor Information System—a John Ashcroft-approved initiative to foil evildoers by monitoring the studies of foreign university students. Protesting the Orwellian measure—and the “surveillance fee” that’s been tacked onto their tuition bills to pay for it—30 UMass activists staged a two-day hunger strike in April, followed by a 400-student march that had to be broken up by campus cops. There’s more than principle at stake: Dozens of grad students are risking deportation by refusing to pay the fee.

8. Mount St. Mary’s University: When this small, Maryland Catholic school announced it was bestowing an honorary degree on White House counsel Alberto Gonzales, student activists raised holy hell. Capital punishment, after all, is at odds with church teachings, and Gonzales had been instrumental in denying 57 death-row clemency appeals—including that of a mentally retarded man—when he served as counsel to then Texas governor George W. Bush. After a joint student-faculty protest, Mount St. Mary’s rescinded the degree.

9. Arizona State University: Following a rash of antigay harassment on campus, the LGBTQ Coalition convinced the administration in March to expand its nondiscrimination policy to include gender identity, making ASU the only state institution with protections for transgender people. This followed the Greek council’s February decision to approve the school’s first lesbian sorority, Gamma Rho Lambda (a.k.a. GRL)—making ASU the only university in the country with both gay and lesbian frats.

10. UC Berkeley: Graduation came two months early as activists held a “non-commencement ceremony” in Sproul Plaza to protest budget cuts that have limited enrollment. Empty chairs and life-size statues stood in for the 400 “missing students” from the class of 2008. Actual graduation ceremonies in May brought less playful protest. After Boalt Law School grads discovered that Berkeley professor John Yoo had penned one of the now-infamous Justice Department “torture memos,” one quarter of the graduating class donned red armbands, passed out “wanted” posters, and demanded that Yoo repudiate his memo or resign.