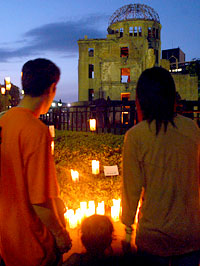 Even though we promptly dubbed the site of the 9/11 attacks in New York City “Ground Zero” — once a term reserved for an atomic blast — Americans have never really come to grips either with the atomic bombings of Hiroshima and Nagasaki or the nuclear age they ushered in.

There can be no question that, as the big bang that might end it all, the atomic bomb haunted Cold War America. In those years, while the young watched endless versions of nuclear disaster transmuted into B-horror films, the grown-ups who ran our world went on a vast shopping spree for world-ending weaponry, building nuclear arsenals that grew into the tens of thousands of weapons.

When the Cold War finally ended with the Soviet Union’s quite peaceful collapse, however, a nuclear “peace dividend” never quite arrived. The arsenals of the former superpower adversaries remained quietly in place, drawn down but strangely untouched, awaiting a new mission, while just beyond sight, the knowledge of the making of such weapons spread to other countries ready to launch their own threatening mini-cold wars.

In 1995, fifty years after that first bomb went off over the Aioi Bridge in Hiroshima, it still proved impossible in the U.S. to agree upon a nuclear creation tale. Was August 6, 1945, the heroic ending to a global war or the horrific beginning of a new age? The Enola Gay, the plane that dropped the Hiroshima bomb and a shattered school child’s lunchbox from Hiroshima could not yet, it turned out, inhabit the same exhibit space at the Smithsonian’s National Air and Space Museum in Washington DC.

Today, while the Bush administration promotes a new generation of nuclear “bunker-busters” as the best means to fight future anti-proliferation wars, such once uniquely world-threatening weapons have had to join a jostling queue of world-ending possibilities in the dreams of our planet’s young. Still, for people of a certain age like me, Hiroshima is where it all began. So on this August 6th, I would like to try, once again, to lay out the pieces of a nuclear story that none of us, it seems, can yet quite tell.

In my story, there are three characters and no dialogue. There is my father, who volunteered for the Army Air Corps at age thirty-five, immediately after the Japanese attack on Pearl Harbor. He fought in Burma, was painfully silent on his wartime experiences, and died on Pearl Harbor Day in 1983. Then there’s me, growing up in a world in which my father’s war was glorified everywhere, in which my play fantasies in any park included mowing down Japanese soldiers — but my dreams were of nuclear destruction. Finally, there is a Japanese boy whose name and fate are unknown to me.

This is a story of multiple silences. The first of those, the silence of my father, was once no barrier to the stories I told myself. If anything, his silence enhanced them, since in the 1950s, male silence seemed a heroic attribute (and perhaps it was, though hardly in the way I imagined at the time). Sitting in the dark with him then at any World War II movie was enough for me.

As it turned out though, the only part of his war I possessed was its final act, and around this too, there grew up a puzzling silence. The very idea of nuclear destruction seemed not to touch him. Like other school children, I went through nuclear attack drills with sirens howling outside, while — I had no doubt — he continued to work unfazed in his office. It was I who watched the irradiated ants and nuclearized monsters of our teen-screen life stomp the Earth. It was I who went to the French film Hiroshima Mon Amour, where I was shocked by my first sight of the human casualties of the A-bombing, and to On the Beach to catch a glimpse of how the world might actually end. It was I who saw the mushroom cloud rise in my dreams, felt its heat sear my arm before I awoke. Of all this I said not a word to him, nor he to me.

On his erstwhile enemies, however, my father was not silent. He hated the Japanese with a war-bred passion. They had, he told me, “done things” that could not be discussed to “boys” he had known. Subsequent history — the amicable American occupation of Japan or the emergence of that defeated land as an ally — did not seem to touch him.

His hatred of all things Japanese was not a ruling passion of my childhood only because Japan was so absent from our lives. There was nothing Japanese in our house (one did not buy their products); we avoided the only Japanese restaurant in our part of town, and no Japanese people ever came to visit. Even the evil Japanese I saw in war movies, who might sneeringly hiss, “I was educated in your University of Southern California” before they met their suicidal fates were, I now know, regularly played by non-Japanese actors.

In the end, I followed my own path to Hiroshima, drawn perhaps to the world my father so vehemently rejected. In 1979, as an editor, I published Unforgettable Fire, the drawings of Hiroshima residents who had lived through that day. It was, I suspect, the first time any sizable number of images of the human damage there made it into mainstream American culture. I visited Japan in 1982, thanks to the book’s Japanese editor who took me to Hiroshima — an experience I found myself unable to talk about on return. This, too, became part of the silences my father and I shared.

To make a story thus far, would seem relatively simple. Two generations face each other across the chasm of a war and an act that divided them. It is the story we all know. And yet, there is my third character and third silence — the Japanese boy who drifted into my consciousness after an absence of almost four decades only a few years ago. I no longer remember — I can’t even imagine — how he and I were put in contact sometime in the mid-1950s. Like me, my Japanese pen-pal must have been eleven or twelve years old. If we exchanged photos, I have no memory of his face, nor does a name come to mind. If I can remember half-jokingly writing my own address at that age (“New York City, New York, USA, the Solar System, the Galaxy, the Universe”), I can’t remember writing his. I already knew by then that a place called Albany was the capital of New York State, but New York City still seemed to me the center of the world. In many ways, I wasn’t wrong.

Even if he lived in Tokyo, my Japanese pen-pal could have had no such illusions. Like me, he had undoubtedly been born during World War II. Perhaps in his first year of life he had been evacuated from one of Japan’s charred cities. For him, that disastrous war would not have been a memory. If he had gone to the movies with his father in the 1950s, he might have seen Godzilla (not the U.S. Air Force) dismantle Tokyo and he might have hardly remembered those economically difficult first years of American occupation. But he could not at that time have imagined himself at the center of the universe.

I have a faint memory of the feel of his letters; a crinkly thinness undoubtedly meant to save infinitesimal amounts of weight (and so, money). We wrote, of course, in English, for much of the planet, if not the solar-system-galaxy-universe, was beginning to operate in that universal language which seemed to radiate from my home city to the world like the rays of the sun. But what I most remember are the exotic-looking stamps that arrived on (or in) his letters. For I was, with my father, an avid stamp collector. On Sunday afternoons, my father and I prepared and mounted our stamps, consulted our Scott’s Catalog, and pasted them in. In this way, the Japanese section of our album was filled with that boy’s offerings; without comment, but also without protest from my father.

We exchanged letters — none of which remain — for a year or two and then who knows what interest of mine (or his) overcame us; perhaps only the resistance boys can have to writing letters. In any case, he, too, entered a realm of silence. Only now, remembering those quiet moments of closeness when my father and I worked on our albums, do I note that he existed briefly and without discussion in our lives. He existed for both of us, perhaps, in the ambiguous space that silence can create. And now I wonder sometimes what kinds of nuclear dreams my father may have had.

For all of us in a sense, the Earth was knocked off its axis on August 6, 1945. In that one moment, my father’s war ended and my war — the Cold War — began. But in my terms, it seems so much messier than that. For we, and that boy, continued to live in the same world together for a long time, accepting and embroidering each other’s silences.

The bomb still runs like a fissure, but also like an attracting current — a secret unity — through our lives. The rent it tore in history was deep and the generational divide, given the experiences of those growing up on either side of it, profound. But any story would also have to hold the ways, even deeper and harder to fathom, in which we lived through it all together in pain, hatred, love, and most of all silence.

In this fifty-ninth year after Hiroshima, a year charged with no special meaning, perhaps we will think a little about the stories we can’t tell, and about the subterranean stream of emotional horror that unites us, that won’t go away whether, as in 1995, we try to exhibit the Enola Gay as a glorious icon or bury it deep in the Earth with a stake through its metallic heart. For my particular story, the one I’ve never quite been able to tell, there is a Japanese boy who should not have been, but briefly was, with us; who perhaps lives today with his own memories of very different silences. When I think of him now, when I realize that he, my father, and I still can’t inhabit the same story except in silence, a strange kind of emotion rushes up in me, which is hard to explain.