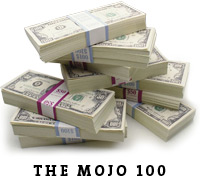 The 2004 presidential campaign promises to be the costliest in history, thanks largely to the high-powered fundraising efforts of President George W. Bush. By mid-April, Bush had already raised more than $185 million – just $10 million less than he collected during the entire 2000 campaign — with much of that money raised at dozens of fundraisers organized by longtime GOP donors and attended by Bush, Vice President Dick Cheney, or other White House power-brokers.

Bush’s presumptive opponent come November, Sen. John Kerry, entered 2004 trailing the president badly in the hunt for campaign money. Then Kerry set a new fundraising record over the first three months of the year, collecting $57 million and out-raising Bush by $18 million. By the end of March, Kerry’s campaign had raised $85.5 million. Still, the president still holds a huge lead in the fundraising contest. Bush’s campaign spent nearly as much on television ads in March alone as Kerry’s raised over the entire first quarter. And Bush’s campaign has $86 million in available cash, compared to only $32 million for Kerry. Were Kerry to continue raising money at the torrid pace he set in March, he could match Bush by the middle of the summer. But only if Bush were to effectively stop his own fundraising efforts. The more likely scenario: Bush will be the first presidential candidate to break the $200 million barrier, and Kerry will shatter former Vice President Al Gore’s $132 million figure from four years ago.

If you think that proves the 2002 McCain-Feingold campaign finance reform law did not accomplish what its supporters hoped for, you’re not alone. Though McCain-Feingold was narrowly drafted as a crackdown on unregulated ‘soft money’ donations to parties, it was sold to the public as an attack on the corrupting influence of big money. As Sen. Carl Levin (D-MI) declared during the final hours of debate on the measure, McCain-Feingold was seen as effort to “bring an end to solicitations and contributions of hundreds of thousands of dollars in exchange for access to people in power.” If that is the yardstick by which McCain-Feingold should be measured, it has failed. And as Charles Lewis writes in examining the lasting influence of money in politics (This Is Reform?), both parties are to blame.

Bill Clinton was just cranking up his reelection campaign when Mother Jones first introduced the Mother Jones 400 in April 1996. The interactive, searchable database of top campaign contributors was a first of its kind, and we expanded on the theme in 1997, 1998, and 2000. But the McCain-Feingold reforms have reshaped the campaign finance landscape, and we have reshaped our efforts. In the past, our lists have combined soft money donations – unregulated and uncapped gifts provided to political parties and non-party groups – with regulated and limited ‘hard money’ donations given to federal candidates and political action committees. Such combined lists were relatively easy to compile, because all donations – hard or soft – were tracked by the Federal Election Commission. That is no longer the case. Today, while the commission continues to track and regulate hard money donations, the McCain-Feingold reforms have pushed soft money giving into a political limbo populated by non-profit issue groups exempt from any FEC reporting.

The Mother Jones 100 offers a look into this new world of campaign finance. In the place of a single list, we are publishing multiple lists. In addition to providing a ranking of the top overall campaign contributors — a list drawn from both FEC and Internal Revenue Service data – we are providing separate lists of the top hard money contributors and the top soft money contributors. And we have examined the past contributions made by the so-called ‘bundlers,’ the 450-plus Rangers and Pioneers that have pledged to raise tens of millions to fuel the Bush-Cheney campaign.

As in past years, the data has been pulled from federal sources and compiled by the Center for Responsive Politics, a nonprofit research organization in Washington, D.C. Unlike in past years, the center has had to comb through multiple databases. While the FEC regulates and records hard money gifts, the soft money contributions can be tracked only through the Internal Revenue Service. The FEC numbers reflect the amounts given through February 29, 2004. We plan to update the lists at several points during the campaign.

Perhaps the most striking finding so far is that, despite the McCain-Feingold reforms, the cast of players is essentially unchanged. As Jodi Enda reports in her examination of the Bush-Cheney campaign’s fundraising machine (Welcome to Rangerville), the Republican donors who once wrote six-figure checks in exchange for access remain at the center of the president’s revamped campaign finance machine. Where they once contributed huge sums in soft money, they are now bundling, soliciting scores of smaller hard money gifts from friends and associates. The Bush campaign’s list of Rangers and Pioneers – supporters who have pledged to raise more than $200,000 or $100,000, respectively – reads like a who’s who of the top GOP soft money donors from 2000 and before. Kerry has also invited supporters to join the bundling game, though with a less ambitious $50,000 minimum pledge, and some of the Democratic Party’s most generous longtime donors are jumping on board.

Even soft money, the specific target of McCain-Feingold, has not disappeared from electioneering. Political operatives have formed a variety of “527” groups, named after the section of the tax code under which they operate. Liberal donors such as billionaire financier George Soros, insurance mogul Peter Lewis, and software pioneer Robert Glaser bankroll the largest of these groups — among them MoveOn.org, Americans Coming Together, and the Media Fund. And in the coming months (depending on the outcome of a Federal Elections Commission decision on whether 527s can continue to operate without significant FEC oversight) Republican strategists are prepared to create soft money groups of their own, as Michael Scherer reports (The Billion-Dollar Loophole) — including secretive nonprofits that are required to disclosure almost nothing.

It is probably too early to pass judgment on McCain-Feingold. Supporters have rightly pointed out that the measure has removed political candidates from the soft money chase, and has done away with the spurious ‘party-building’ efforts used to justify huge, unregulated gifts in the past. But federal campaigns — especially the race for the White House — remain awash in money. In fact, the situation is remarkably like one described by a prescient John Kerry three years ago: “It still leaves us in a race, ever-escalating, of raising extraordinary amounts of hard money, cavorting around the country, still indebted to interests, still asking for large sums of money.”