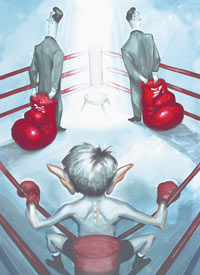 Re: Messaging for the Long Haul

LET’S ASSUME THAT WE COME OUT of the primaries on top. It’s not too early to start framing the case for you against Bush. In fact, general election strategy should start now, because the RNC is holding its convention as close to Ground Zero as they think they can without the naked opportunism stinking in the nostrils of swing
voters. If they don’t overplay the testimonials from firemen’s widows, they’ll have a bigger-than-usual emotional bounce one minute before Labor Day. We need to pour our concrete now so it has time to set up. Herewith a few thoughts:

Likely Attacks Remember Lee Atwater vowing to strip the bark off Dukakis’ back? We’re going to hear a lot about elitist liberals out of touch with mainstream values. Their first move is to galvanize those 4 million nonvoting evangelicals, while boxing you into a corner, by putting gay marriage into their platform and up for a constitutional amendment. We need to be on top of this as soon as the first rhetoric comes out of their campaign. Call it what it is—divisiveness that pits groups of Americans against each other, which is un-American and what the Republicans always do when they need a wedge. Get the focus off the issue and on the tactic. Ditto with every other cultural issue. Tone is everything here—you’re sorry the president of all the people feels compelled to divide us. Don’t dodge, obfuscate, or hedge—neutralize with a short, direct answer and head for higher ground. For every outraged evangelical that gets off his ass and down to the polls, we’ll snag an upscale suburbanite whose office pal or nephew is gay.

Also expect them to dig up your more glaring changes of position. Bush’s stump speech will include a line like “This is what he thought before the Democratic special interests got ahold of him. I liked the old version better.” Make a virtue of it—you have enough sense to know when to change your mind: “If I thought Iraq had nukes, I’d be the first to say, ‘I’m glad I was wrong.'” Help voters draw the comparison with an insecure and arrogant president. And openness will play with a press sick of hitting the administration’s brick wall. Take a page from McCain’s “Straight Talk Express.” What we risk in gotcha points we’ll recover in good will and favorable contrast to the self-righteous mute in the White House.

The Real Class Warriors Let’s assume the economic indicators continue
to improve. Bush will crow tax cuts are working and you’re just another spendthrift liberal who
doesn’t trust the people with their own money. This is a dangerous area for us, and preaching fiscal
responsibility for the sake of our unborn grandchildren won’t cut it. We need data comparing where
we were in 2000 and where we are now. But numbers alone aren’t enough if Bush convinces the public
the economy is moving in the right direction. To counter that, we need to pair “Are you better off?”
stories with “He doesn’t get it.” The overall numbers may be up, but average people don’t feel their
lives are getting better. We need real live Americans on- stage with you, in our ads, in your speeches,
and ultimately in your debate points—stories of middle-class jobs lost, school budgets
cut, etc. When they talk about class warfare, throw it back at them—they’re the ones practicing
it, and we’ve got the numbers to prove it, not to mention Kenny Boy and other malefactors getting
off. Big picture: The indicators might be good for the administration’s friends, but they don’t
tell the truth about ordinary people. To be honest, though, an improving economy worries the hell
out of me.

Don’t Give an Inch on Security and Patriotism This one is huge and we need
to take it right to them. Polling shows steady erosion of support for the administration—the
public is waking up out of a fear-induced coma. Alienating friends and allies, turning the
Muslim world against us, stretching the armed forces dangerously thin, letting Afghanistan and
Al Qaeda get away from us, going into Iraq without thinking it through or gathering support—Bush
has made the country less secure, not more. And to give Americans the illusion that the war on terror
is being won, they’ve been secretive, manipulative, deceptive, etc. Revive the leaked Rumsfeld
memo from back in the fall—it’s about the only straight talk the public has heard. These points
lead to a president who takes in no bad news.

Larger theme: We can’t win the war unless the government levels with
the country. There’s nothing patriotic about muzzling critics—maybe the president should
have listened to a few. We will win because we’re a democracy. Our openness is our strength.
Patriotism includes saying what you think. Use all the language that the right co-opted long ago
and turn it back on them. Use our friends in the press to hit home that hardly anyone making life-and-death
decisions ever wore a uniform. The war on terror is not an area to run away from—the party tried
to change the subject to prescription drugs in 2002 and we deservedly got our butts kicked. Some
of the bright young minds in my shop want to make Iraq the big target, basically quagmire the hell
out of it. Unfortunately, these folks weren’t even alive when McGovern got buried. I’m old enough
to know how this will play: Democrats are soft on terror, anti-American, not to be trusted with your
security. We need to pick our targets: not the war against Saddam per se but the way the war was planned
and sold, not the need to fix Iraq but the bad policies still botching the job. Send some disaffected
ex-spooks in front of the cameras. There’s also potential in the military family community if we
can convince them we’ll take better care of the soldiers—talk about pay and benefit cuts,
hint that Bush doesn’t feel their pain. The thing to keep hitting is that the administration is making
us less safe.

Go Negative by Subcontract There are a lot of potential Nixons
out there to play off your Ike. Former opponents need to motivate their sectors of the base with high-profile
endorsements and spirited attacks. If there are any sour grapes, unleash our elder statesmen (Gore,
Kennedy, Jackson) to make pointed remarks about the beatability of Bush and the need for unity.
Get Daschle and Pelosi to privately warn about the political cost of nonendorsements. Here’s one
place to unleash Clinton—on attack, with a smile (“We left them a pretty darn good country
and they sure tried hard to mess it up”). Also, let’s take the temperature of Republican foreign-policy
mandarins and retired military types: Eagleburger, Shinseki, Zinni—anybody checked
in with Scowcroft? Even if we don’t get any endorsements, sitting down with them looks presidential
and indicates their fearfulness about our foreign policy. Handled delicately, an endorsement
isn’t out of the question. I think they hate Wolfo-witz and company more than we do.

Start running issue ads ASAP. We’ll poll for language, but the early
themes should be the low-hanging fruit: no-bid cronyism, Halliburton, environment. Cheney
or his shadow should be in every one of them. He scares the hell out of people. With 58 percent of the
public thinking Bush doesn’t have a clue what their lives are like, the boy-in-a-bubble thing is
rich terrain if we handle it subtly. Let’s focus-test a couple of ads: Bush speech with robotic delivery
next to an average citizen saying the opposite is true. Or a thematic montage of Bush saying he doesn’t
read the papers, that attacks in Iraq mean we’re succeeding, and other out-of-touch remarks. I
want to have one short somber ad where we cut from Bush saying “Bring it on” to scenes of Iraq carnage
set to Barber’s Adagio for Strings. Not that we’ll use it, but to have in reserve depending
on how dirty they get. Don’t say no just yet. Johnson wanted to run the Daisy ad a
couple more times even after officially telling Moyers to pull it. LBJ knew that sucker worked.

Study the Gipper’s Playbook Still, we can’t win with negativity. One
of our best weap-ons is that Bush himself is negative. His least convincing mode is sunny optimism.
He makes people nervous—either about him or about the rest of the world. Jimmy Carter didn’t
get whipped because Reagan asked, “Are you better off?” He got whipped because he was grim and Reagan
made people feel better about being Americans. You need to do that, too: Say, “We’re better than
this—we can do better than this. The way Americans responded to September 11 showed us what
kind of country this is. I want to revive that spirit.” Bush’s skin is thinner than rice paper, and
ideally we can maneuver him into a “you’re no Jack Kennedy” debate moment. Bait him where he thinks
he owns you. Here’s the setup—you turn to him, direct address: “You were given a great gift—the
support of the American people during a crisis. But you squandered it, and your party has no right
to claim that tragic day as its personal property. The heroes that morning weren’t oil company CEOs.
The firemen and police and rescue workers going up in the towers didn’t have offshore shelters,
and their children won’t see a dollar from the repeal of the estate tax. The young Americans shouldering
the weight of your mistakes in Afghanistan and Iraq are not defense contractors with no-bid deals.
I want to lead a country of true patriots.”

Then sit back and watch him try not to foam at the mouth.

And this gives you your main theme for the fall: a new patriotism. (Boston
convention is perfect.) Instead of letting them claim patriotism for themselves, redefine it
to highlight their failures both at home and abroad: We rise or fall together as Americans. We have
friends around the world that we still need, and we have more in common as Americans than anything
that separates us. This theme ties together the economic and domestic piece with the security and
foreign- policy piece. And it’s a happier story than the one they have to tell. We’re Americans and
we can do better. We want to give, not just take. We want to serve our country—but the sacrifice
has to be fair and equal.

The winner in November, as always, is the candidate who makes us feel
better about being Americans. You’re the man.