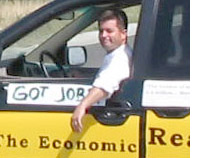 When John Andrew got laid off this summer he could take solace in having plenty of company: Since George W. Bush took office, nearly 3 million Americans have lost their jobs.

But the same day that this client-services director for a Minnesota software firm got his pink slip, he also heard that the president’s economic team was coming to the Midwest on a “Jobs and Growth” tour — a three-day, six-city publicity blitz to talk up the benefits of the Bush tax cuts.

“It pissed me off,” says Andrew, who felt the administration had no business crowing about an economy that was shedding one job every 15 seconds. “I’m 41 years old; I got two kids,” he says, “and I decided this would be a good time for dad to stand up and protest.”

So Andrew decked out the family’s blue Honda Odyssey with protest placards and hit the highway on his own “Economic Reality” tour. He shadowed the bus carrying cabinet secretaries John Snow, Donald Evans, and Elaine Chao, to give his fellow Americans “the real facts — that this economy stinks, and Bush’s tax cuts are making it worse.”

It wasn’t long before the dueling economic worldviews collided — outside a Culvers fast food joint (home of the ButterBurger) in Wausau , Wisconsin. While the secretaries boasted of collecting, “real-time economic information from real American people,” they apparently didn’t want to hear from Andrew, who was turned away at the door by security.

Undeterred, Andrew drove his minivan repeatedly into the window-lined drive thru, hoping to catch their attention. “I probably went through 20 times,” says, whose van quickly filled to overflowing with the Diet Cokes he kept buying.

On his final pass, Andrew caught a glimpse of secretary Snow walking outside the restaurant. “I rolled down my window and yelled: ‘Hey John!’,” Andrew recalls, “which was probably kind of impertinent considering he’s the Secretary of the Treasury.”

Flanked by a secret service detail, Snow came up to the passenger-side window. Andrew explained to the secretary that he’d just been laid off. “I told him that I strongly disagreed with the economic policies that this administration was pursuing, and that I felt that it was ineffective, wrong headed, and doing nothing to help the majority of American workers.”

Snow, in turn, encouraged patience, reasoning that the first tax cut (now nearly two years old) hadn’t had time to take effect, and that the benefits of the second tax cut were following close behind. He then offered two parting words of advice: “Just wait.”

“I was stunned by the response,” says Andrew. “I’d like to see those words on a PR banner behind Snow at the podium: ‘Jobs and Growth: Just Wait.’ Maybe I should call Citibank, which holds my mortgage, and tell them ‘Just Wait — I can’t pay you this month.'”

Andrew posted an account of this encounter on his website, jobforjohn.com, where he also created a map tracking the average number of jobs lost between each stop on the “Jobs and Growth” tour: Green Bay to Wausau — 710 lost jobs; Wausau to Rochester, Minnesota — 1510 lost jobs. Andrew quickly became a poster-boy for the economically discontent.

“I really admire John for taking his message right to the source,” says Andrew Stettner, a policy analyst for the National Employment Law Project in New York City. “It’s tough being unemployed. People take a lot of pride in their jobs. You’re suddenly laid off it can feel like a scarlet letter — you don’t want to show it off. It takes a lot of guts to get out there and say, ‘Look, this happened to me. It could happen to you. Why isn’t the government doing something about it?'”

After three days of living out of his car and dodging secret service agents, a hoarse Andrew wound his way home to Northfield, Minnesota to begin the real work of looking for a new job. Though this particular swing of his Economic Reality tour is over, Andrew insists his work as an economic activist isn’t done. “There’s gas in the van,” he says, “If they hit the road again, I’ll be after them.”