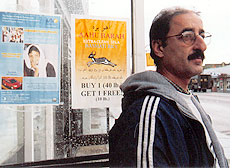 With its freshly baked bread and impressive selection of Afghan music CD’s, Pamir Food Mart in suburban Fremont, California’s “Little Kabul” neighborhood does brisk business. On one recent evening, owner Homayoun Khamosh, a former mujahedeen who fought the Soviets in the 1980s, gossiped with regulars who had dropped in to pick up last-minute ingredients for Ramadan dinners. Like many in this heavily-Afghan community, Khamosh is ambivalent about Washington’s rush towards war with Iraq.

Not so long ago, Afghan-Americans were buzzing with hope for the future. As US-led forces swept through Afghanistan and the Taliban melted into the hills, Afghan-Americans cheered the prospect of regime change in their war-ravaged country. In the San Francisco Bay Area, which is home to between 40,000 and 60,000 Afghans — the largest concentration outside Afghanistan — refugees old and new applauded the Taliban’s fall, even as they mourned the loss of innocent lives.

Now, last year’s cautious optimism has given way to anxiety. Afghans have been among the most hawkish of American Muslims, and most agree that a case can be made for invading Iraq. But, in the Bay Area’s Afghan community, most believe that the White House has failed to make a convincing argument for war. And many Afghan-Americans worry about the consequences of a war — the backlash at home and the likelihood that a fresh conflict will further distract Washington and the world from the urgent need to rebuild Afghanistan.

“We don’t have a clear definition of why we’re going to war,” says Mizgon Zahir, a 19 year-old journalist, student and publisher of Afghana Journal. “Is it to get rid of Saddam Hussein? Is it for oil? Nuclear weapons? Terrorism? … It seems like the US just wants a way to say we won the war [on terrorism], and Iraq is an excuse for that.”

Masood Ansari, a 23-year old financial consultant from Milpitas, says he is convinced that Washington’s war initiative is tied to oil profits and regional control — not freeing the Iraqi people from Saddam Hussein.

“They use human rights violations, weapons [of mass destruction] and this and that, but it’s a cover,” he asserts.

In fact, many in Fremont’s Afghan community worry that a US-led attack on Iraq will only play into the hands of Islamic extremists and other anti-democratic forces in the Arab world by reinforcing a perception that Washington is waging a war on Muslims.

“It can easily give [extremists] another excuse or, so to speak, another proof, to tell their populations, ‘Here, didn’t we tell you? They’re attacking us. They’re killing us,'” says Wali Shaaker, a 35-year old graduate student, poet and writer for Afghan Magazine.

To deny terrorist groups these “proofs,” many argue, Washington must offer more than simple verbal assurances. First and foremost, says Dr. Waheed Momand, the 53-year old President of the Fremont-based Afghan Coalition, the US should demonstrate its good faith by attending to a task the Bush administration has thus far been reluctant to tackle — the pursuit of a peaceful resolution to the Palestine-Israel conflict.

“To solve the problem of the Middle East, we have to solve the issue of Palestine,” Momand insists. “Then the people of the Islamic world will see that the United States is not just pushing one button and forgetting about the other one.”

In Little Kabul, though, few think that is likely to happen, and most dismiss the Bush administration’s attempts at mollifying the Muslim community — such as the White House’s high-profile Ramadan dinners — as little more than photo-ops.

“If we are going to war with Iraq, then we need to get as many people on our side as possible,” Zahir says. “[But] We’re not doing it.”

Afghans’ misgivings are reinforced by their fear that the Bush administration’s obsessive focus on Iraq will obscure the pressing needs in their homeland. Already, they say, Afghanistan’s ongoing instability has been pushed off the front page. With war looming, they worry it will also be pushed off the administration’s policy agenda.

“Most of us feel that the important stuff to do in Afghanistan was left completely unfinished,” said Tamim Ansary, the San Francisco writer who declared in a post-Sept. 11 essay, ‘You can’t bomb Afghanistan back into the Stone Age. We’re already there.’ Wali Kohgadai, a philosophy student at California State University-Hayward, was even blunter, saying that Afghans believe “the US and Tony Blair are saying they won’t forget Afghanistan, but they already have.”

In fact, some say history is set to repeat itself if the US reneges on its promises to rebuild Afghanistan.

Noting that the US pullout from Afghanistan in the early 1990s led to a disastrous civil war, Shaaker worries that Washington is preparing to make the same mistake again.

“If they leave it like this, it’ll be like this infested ground. If they leave the conditions so unstable, [terrorists will] regroup, reorganize, and come back and attack us again.”

While worrying about Afghanistan’s future, many in Fremont are also concerned about their own prospects. Unsurprisingly, perhaps, Afghan-Americans see a lasting menace in the ongoing erosion of civil liberties. While the Bush administration’s defense of sweeping surveillance initiatives and indefinite detentions may seem abstract to most Americans, for the survivors of Afghanistan’s long war against the Soviet Union and the domestic bloodletting that followed, they are frighteningly familiar.

“We took our children from the war, from the killing, to be safe,” says Rona Popal, President of the Fremont-based Afghan Women’s Association International and a delegate to last summer’s national council in Kabul. “That’s why we chose the United States. But to see again that they are not safe, it’s really scary.”

“Afghans in America feel somewhat cowed,” Ansary notes. “They’re nervous about their place here. A lot of them are nervous specifically because of being Muslim.”

Ultimately, Ansary says he worries about the possibility of government-sponsored “witch hunting” of Muslims, Arabs and anyone else perceived to be insufficiently patriotic. It is a concern echoed by others in the Bay Area’s Afghan neighborhoods, many of whom also fear that American Muslims will again become targets when war comes. They have reason for concern: the FBI recently reported that hate crimes against Muslims jumped by 1600 percent after the Sept. 11 terror attacks.

While saying he is not personally concerned about a hate-filled backlash, Amad Haya, a civil engineer from Hayward, worries that war will only estrange Muslims from the mainstream of America.

Back at Pamir Food Mart, the customers come and go. Khamosh is busy, but he takes a moment to consider when asked whether he believes an invasion of Iraq would help stamp out terrorism. On the contrary, he replies somberly, it will only spark a wider war.

“This is just the beginning.”