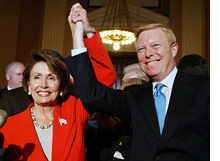 Congratulations on becoming the Democrats’ Minority Leader, and fasten your seat belt. You’re now up against the tyranny of desperate expectations. Everyone expects a rethink, and fast. Everyone knows what went wrong — after the fact. But history is merciless. Remember Auden: “History to the defeated/May say Alas but cannot help or pardon.”

Having spun into a ditch on Nov. 5, Democrats might be forgiven for imagining that the worst is over — and that the sequel has to be prettier. In America’s nerve-wracked culture, we’re big at going forward and moving on. As Alec Baldwin’s narcissist movie star blithely says after totaling a car in David Mamet’s hilarious “State and Main”: “Well, that happened.”

It happened, all right — and I do mean all Right. The Republicans now control every last branch of the federal government. Going forward, they’re going backward (to Reagan, to Goldwater), dragging policy with them and whistling Dixie.

Please don’t content yourself with whistling in the dark. Ignore the silly claim that the Election Day debacle wasn’t a debacle. So a mere 41,000 votes in Missouri and New Hampshire would have given the Democrats a majority in the Senate. So what? If I had two wheels, I’d be a bicycle. But I don’t, and I’m not. In a country divided on a knife-edge, the margins count, and cheap consolations don’t.

Please don’t content yourself with sounding like Terry McAuliffe, personification of the slick and the clueless, chirping about the Democrats’ gubernatorial gains and his own fund-raising prowess, straight-facedly declaring: “I could make the argument that George Bush should have done a lot better last night.” That confidence and a quarter will buy you some Global Crossing stock (which, of course, is now worth an infinitesimal fraction of what it was when McAuliffe turned a $100,000 investment into a reported $18 million payday).

Predictably, your caucus is divided on how to recover from the Nov. 5 disaster. Predictably, you are hearing two ideologically distinct arguments. The liberals want you to take your stand on a strong reform agenda, attacking Bush and fighting off the Republicans at every opportunity. The Democratic Leadership Council moderates want you to avoid ideological bombs like tax fairness and foreign policy to focus on such consensual issues as health care and education.

Both are right, at least in part.

The liberal wing accurately notes that right-wing Democrats lost — Max Cleland, Jean Carnahan, and Jeanne Shaheen, among others — while Paul Wellstone, may his memory shine, wasn’t hurt by his antiwar stand and was probably helped by it. Ducking confrontation by wrapping oneself around Bush’s war plans was evidently no ticket to Democratic success.

Neither was fuzzing one’s economic program by straining to avoid the unavoidable issue of taxes.

To declare that the Democrats should stand tall for jobs, as John Sweeney has unhelpfully proposed, is to swallow mush. Who isn’t for jobs? The question is how. Bush is for trickle-down jobs through tax cuts for plutocrats. The Democrats’ version of a “Contract with America” must get serious about the how, or it’s worthless. Start with making taxes more progressive. It might have been suicidal to rescind the Bush tax cuts, but as Paul Glastris points out in Washington Monthly, Democrats, if they’d been alive, might have reminded voters that here-and-now rebates for ordinary Americans, as opposed to huge future rebates for the rich, were their idea, not Bush’s.

Now, the DLC Democrats argue that Cleland, Carnahan, et al. would have done no better had the Democrats run pell-mell to the left on every issue at once. Take the centrists at their word that they support “universal access to quality, affordable health care.” The Democrats have it all over the Republicans on health care and education. Make sure the country knows it. Stop nickel-and-diming health care with a pipsqueak program for prescription drugs that the tricky Republicans could pretend to rival. You’re never going to fire up younger voters that way. (Their main interest in drugs has nothing to do with prescriptions.)

John Judis and Ruy Teixeira, whose new book argues that we’re on the verge of an Emerging Democratic Majority, think that the Democrats were sunk by a big Republican turnout in the suburbs and rural areas, which love Bush more than the cities hate him. In the cities, the Democrats’ turnout held. But out in the suburbs, where the majority lives, your troops were outmobilized by the Republicans. Republican voters were fired up by Bush, the war, and the fight against terrorism; the Democrats, by nothing more than their hostility to the Republicans.

As enemies, Al-Qaeda and Saddam Hussein will outdraw George W. Bush anytime. Democrats need to give their supporters reasons to get excited. And they need to give swing suburban voters plausible alternatives to the GOP agenda. So you must make sure the Democrats have a national security program of their own. Bash Ashcroft, sure. Don’t surrender civil liberties. Bash Bush for ditching the independent investigation into pre-Sept. 11 intelligence failures. While you’re at it, remind the country that on issue after issue Republican values are not theirs. Not least, don’t let up on a woman’s right to choose.

But don’t stop there. Bash Bush for walking away from Afghanistan once the fighting was over. Remind the country that our safety depends on keeping al-Qaeda on the run. Bash Bush for distracting from the necessary fight against al-Qaeda with an unnecessary, risky, and unjustified (but easier) war against Saddam Hussein. And don’t stop at bashing. Put forward a fighting patriotism — tough on terrorism and equally tough on the political roots of terrorism.

What would have happened if the Democrats had nationalized their campaign? We’ll never know. But odds are we would have seen a happier outcome. If the Democrats had offered a “Contract with America” that offered something common on the big issues to all wings of the party, instead of mincing around with details, we’d be getting somewhere.

Recovery isn’t automatic — not even close. It’s up to you, and your counterparts in the Senate, to make sure the Democrats don’t embarrass themselves further in ’04.