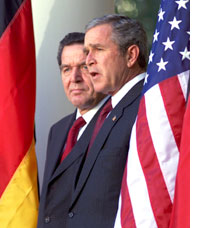 It seemed, for a while, that America’s worldview would change after September 11. The cat-that-ate-the-canary complacency that had infused so much of Washington’s post-Cold War attitude toward the rest of the world would surely evaporate, would it not? A more nuanced and worldly perspective would have to emerge in its place, would it not?

Unfortunately, the answer, so far, has been a resounding ‘No.’ Americans still seem incapable of truly understanding people in other countries. Worse still, officials in Washington and pundits across the country seem to have taken the pain of last September as an incentive to be even more dismissive of foreign views — and to fall back into a static, isolationist world view. There is a fine line separating deeply justified anger and a jingoistic chip on the shoulder, and we are getting a painful lesson in how easily that line can be crossed.

But advocates of measured internationalism should not throw up their hands in despair just yet. It may simply be too early to gauge how September 11 will shape American attitudes. In fact, there seems every reason to believe that September 11 will be remembered as a watershed moment in world affairs, marking the end of one era, defined by the Cold War rivalry of Superpowers, and the beginning of another, during which the United States must come to terms with its new role as a global “hyper-power.” (to borrow the French term). Given the current unprecedented reach of US power – political, military, economic and cultural – American expressions of inadequacy and awkwardness in the face of political and cultural differences are already anachronistic. Within a few years, they will be even more laughably so.

Not too many people noticed, but the largest gathering to mourn the victims of September 11 did not occur in the United States. It took place in Germany. On a rainy Friday evening, just three days after the attacks, a crowd of 200,000 gathered in Berlin to express their solidarity with America, and to honor those who died. It was an act of historical friendship and respect, heartfelt and honest, and it was, for the most part, ignored in the United States.

In the year since, relations between Berlin and Washington have deteriorated. The list of America’s shoddy diplomatic behavior ranges from the trivial — such as the persistent US demand that Germany reroute a major Berlin thoroughfare to accommodate a security cordon around the new US embassy — to the profound — such as Washington’s apparent unwillingness to accept the changing sensibilities of the Berlin government of Chancellor Gerhard Schroeder and his Green allies. Schroeder has gradually emerged as one of Europe’s most outspoken critics of American policy.

A generation ago, Ronald Reagan insisted on laying a wreath at a West German cemetery in Bitburg, even though SS men were buried there. He did it partly out of pure stubbornness, but also out of an abiding desire to keep Bonn firmly in Washington’s corner. That’s how it was in the Cold War. Now, we have a US President who can’t hide his conviction that Washington doesn’t need anyone in its corner. Foreign leaders are good for the occasional photo op at the White House, or to be lobbied in one frantic burst of diplomatic activity when the mood strikes, but not to be cultivated in any real sense.

Repeatedly over the last year, the White House has tried to fight charges of unilateralism by announcing a quick round of consultations with foreign leaders. Each time, Washington has failed to include Germany in those discussions. A generation ago, such an oversight would have been unthinkable. Today, it is profoundly unwise — and it offers a clear indication of how haphazard and historically frozen the Bush administration’s foreign policy remains.

The Cold War trained policy analysts across the political spectrum to rely on static formulations, in which the larger conflict determined how allies and adversaries would interact. Details, like proving how a Communist government in North Vietnam threatened democracy in Southeast Asia, were rendered unnecessary by the blanket justifications provided by the larger conflict.

Today, no such static formulation exists, leaving policy-makers without the long-relied-upon compass provided by a larger conflict. Bush and some of his inner circle have responded by suggesting that the War on Terror has become that larger conflict, serving as a theoretical justification for any course of action the president chooses. For these warmed-over Cold Warriors, details, like drawing a link between Saddam Hussein and the September 11 attacks or even terrorism in general, have again become unnecessary, the existence of a new larger conflict has become justification enough.

What Bush and his administration hawks seem unable to grasp is why such justifications carry little weight today. They seem unable to understand that basic diplomatic chores — like acknowledging foreign voices, and showing some receptiveness when they offer good advice — have again become the mortar that hold alliances together.

It bears noting that a large segment of the population in Germany and throughout Europe harbors a surprisingly robust affection and regard for the United States — and did so even before the Sept. 11 attacks brought that affection and regard into fresh focus. It also bears noting that official transatlantic communications were in a sorry state well before September. Schroeder reportedly had doubts that Bush even knew his name when the two leaders met for the first time last year.

Of course, the German leader joined other European leaders in rallying behind America last September, expressing sympathy and support, and vowing to join in the retaliation against Afghanistan’s Taliban regime. One year later, Schroeder has emerged as Europe’s most outspoken opponent of military action against Iraq. Locked in a tight reelection campaign, Schroeder has made political hay with his anti-war message. He has had the courage to state, clearly and loudly, what many in Europe have wanted to say: That American power does not guarantee the blind support of Washington’s European allies, and that support must at least be sought, not merely taken for granted. In many ways, Washington’s disregard for Germany has paid off for Schroeder.

A regional power like Germany has much to gain — and little to lose — from taking a courageous stand and distancing itself from the hyper-power, as Schroeder has on Iraq. In this political calculation, Schroeder is already far ahead of both his American counterparts and his European colleagues. If Washington wants subjects, in Europe and elsewhere, then the Bush administration need not change its approach. But if the president hopes to have allies and friends, not supplicants, then he must show another degree of diplomatic maturity — as Schroeder is already suggesting.

“Friendship cannot mean that you do what the friend wants even if you have another opinion,” Schroeder said on Wednesday. “Anything else would not be friendship, but submission — and I would consider that wrong.”