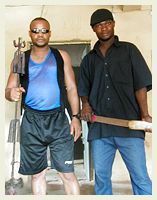 ONITSHA, Nigeria — Three shotgun shell casings and an empty liquor bottle lie on the rough concrete floor near where the six Bakassi Boys sit by the window. Light shines into this sparsely-furnished lobby from the street outside, where, the locals like to say, it is now safe enough to push a cash-heaped wheelbarrow.

Since arriving in this city of half a million people last summer, these renowned vigilantes have done what the police failed to do for decades: Crush an epidemic of violent crime. They have allegedly done so, however, by matching criminals’ violence with lethal attacks of their own. Other vigilante groups operate in Nigeria, but none are so famous or so effective. More importantly, none share the Bakassis’ distinction of being sponsored by a provincial government — and none seem more likely to continue growing in strength.

Crime across this economically troubled country of 120 million soared after Nigeria’s military government yielded to civilian rule in 1999. The change in leadership was a boost for democracy, but not for public safety. The police, better known for shaking down motorists than fighting crime, are poorly paid and often outgunned; well-armed criminal gangs killed dozens of officers in the capital of Lagos the year after civilian rule returned. As a result, Nigerians are increasingly turning towards vigilantes for protection.

When the Bakassi Boys came to Onitsha in August 2000, this largely Christian city in Nigeria’s Anambra state was terrorized by armed robbers, says Chima Nwaiwu, 31, a correspondent for Nigeria’s National Post. Nwaiwu says he himself once cowered in a grocery store while robbers shot it out with police. Another time, he says, a man was killed outside his office. “When you bought bread, you didn’t keep it in a black plastic bag,” he says — lest it be mistaken for a small-denomination bundle of money.

By the following spring, the Bakassi Boys had cleaned things up — allegedly by the brutal but simple expedient of hunting down suspected robbers and imposing violent summary justice.

“They chop the head off,” Nwaiwu says. “Then cut off the legs and arms, pour fuel over the person and set them ablaze.”

The Bakassis deny responsibility for any extrajudicial killings, claiming they just catch criminals and send them to the police. But Daniel Anyogo, the state commissioner of Nigeria’s federally-controlled police, rejects the vigilantes’ claim. Last summer, for instance, he says the Bakassi captured a famous armed robber but refused Anyogo’s direct requests to hand him over.

Few observers doubt the claims about the Bakassi’s murderous methods. New York-based Human Rights Watch estimates the vigilantes have executed at least 100 people. Britain’s Amnesty International has gathered reports of over 1,000 Bakassi killings and dozens of incidents of torture — including an attempt to set a man on fire earlier this month in plain view of a visiting Amnesty delegation. Nwaiwu says he has seen 15 people executed at once.

Although human rights groups are appalled by their methods, the vigilantes’ success has made them wildly popular among Onitsha’s citizens.

“We’re enjoying a wonderful freedom, freedom from the armed robbers,” says Jeremiah Iloeje, the Archdeacon of the Onitsha Anglican Church. Iloeje, 59, leafs through the New Testament to find Biblical justification for the violence. He believes he finds it in Ezekiel 21:31: “I will deliver you into the hands of brutal men, skillful to destroy.”

The Bakassis appeal has spread. Businessmen from neighboring states reportedly view the transformation of Onitsha as a model for their own communities.

“If before you said, ‘Let’s go to Onitsha,’ I wouldn’t even go,” says Ifeanyi Nwandu, a 39-year-old operators of a construction company in nearby Enugu State who says he has been robbed at gunpoint three times. “These armed robbers go unpunished. It’s time they faced the music. We have laws here.”

Human rights advocates acknowledge the Bakassi Boys’ effectiveness, but say vigilante justice is unacceptable. “The only viable alternative to groups like the Bakassi is a police force which works,” says Carina Tertsakian, a researcher with Human Rights Watch’s Africa division. “If the police earned the trust and cooperation of local people, there would be no need for outfits like the Bakassi. I know this may sound a bit idealistic, and realistically it will take some time, but in the long-term, we believe it’s the only acceptable solution.”

In the Bakassi Boys’ office, animal hides are nailed to the wall. “Whatever you see here, let it end here,” reads a sign. Four men in their early 20’s sit behind a big desk. An equal number line a long bench. Prince Ama, 23, a short young man with a split goatee and a Bruce Lee swagger, assumes the role of group spokesman. “There are gods here,” he says. He gestures to what looks like a fake shrunken head and a horse-hair whisk. “There are lots of spirits.” The Boys trade heavily in claims of magical powers. They say bullets won’t pierce them, that they can judge a captive’s guilt by holding up a machete. If it turns red — something only they can see — the party is guilty and the execution tool is at hand.

An official portrait of the state governor, Chinwoke Mbadinuju, also hangs on the office wall. It was Mbadinuju, along with the traders of Onitsha, who invited the vigilantes into Anambra. They had already built up a fearsome reputation in neighboring Abia state, where they were reputedly organized from young market traders. In Abia, local merchants provided funds and the Bakassis had no official standing. In Anambra, Mbadinuju offered to chip in — providing the Bakassis pickup trucks, Mercedes cars and other essentials — and the state legislature passed a bill giving the vigilantes official status. For Mabadinuju, the political calculation is simple: “The armed robbers are in the business of killing innocent people,” he says. “I don’t know anyone who will complain if an armed robber is dead.”

The relationship between Anambra’s politicians and the vigilantes has caused friction with the federal government. Officials in the nation’s capital worry that groups such as the Bakassi Boys could become private armies. Anyogo has a poster in his office depicting the vigilantes and the police as two clashing rams. Formerly heading the nation’s elite Mobile Police, Anyogo was transferred to Onitsha to rein in the Bakassi Boys. He has devoted a 25-man unit to curbing “their excesses,” but with little evident impact.

The Bakassi Boys that have been arrested and turned over to the state courts have quickly been released, Anyogo says. He says some of the vigilantes are suspected of being former robbers, and cites other worries. With crime down, the vigilante group, which Anyogo estimates to be 100 strong, has moved into civil matters, brutally arbitrating land disputes and disagreements in the city’s market.

With elections next year, watchdog organizations worry that vigilantes could be used as political thugs, targeting opponents of their powerful patrons. “There is a clear risk that these groups will become politically manipulated,” Amnesty International warned in a recent statement.

The concerns are not without reason. Last year, the minority leader of Anambra’s legislative assembly, Ifeanyi Ibegbu, was badly beaten by the Bakassis, according to Human Rights Watch. Other prominent community leaders have been killed, allegedly by the Bakassis. Anyogo says the Bakassi Boys were recently used to subdue opposition partisans during an intraparty squabble. Human Rights Watch was told that the Bakassi leadership have consulted Mbadinuju’s security adviser, Chuma Nzeribe, by cell phone during interrogations of suspected criminals.

Despite such concerns, two other states have recently invited the Bakassi Boys in, and a group of bus companies recently announced they would like to use their protection their lines Mbadinuju has argued that they should fight crime nationwide. “If the federal government would assist us,” says Ama, “we could do much more.”