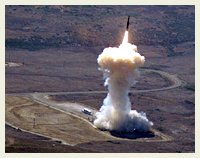 The Bush administration last week declared its intent to withdraw from the Anti-Ballistic Missile Treaty, calling the pact an obsolete agreement that stands in the way of US efforts to develop and deploy a missile defense system.

The timing of the decision is peculiar. Why risk alienating Russia, China and major US allies in Europe in pursuit of an unproven missile defense system? Why abandon the treaty now when experts have indicated that the current missile defense testing program could go on for years before running up against limits imposed by the agreement?

Such questions may have been given careful consideration by Secretary of State Colin Powell, who opposed the rush to abandon the treaty. But for the cadre of administration officials who have long viewed scrapping the ABM treaty as a worthwhile goal in its own right, since doing so would set the stage for making military/technical dominance the centerpiece of U.S. security policy, such questions were probably viewed as irrelevant.

For these hard-liners — Secretary of Defense Donald Rumsfeld, Deputy Secretary of Defense Paul Wolfowitz and other staunch members of the administration’s ballistic missile defense lobby — the decision to abandon the ABM treaty was driven by ideology. Senator Jon Kyl (R-AZ), another committed advocate of missile defense, has dubbed this approach “peace through strength, not peace through paper.”

For Bush, the decision may have also been driven by politics. Sources within the administration have also indicated that the president made a political calculation that it would be better to junk the ABM treaty now, when he’s riding high in public opinion polls, than to wait until closer to the 2004 elections, when the decision could become an issue to be used against him by political adversaries.

Whatever the reasons behind it, this historic shift in U.S. arms control policy represents a major victory for the Star Wars lobby, the powerful network of conservative ideologues, cowboy militarists, and cash-hungry contractors spearheaded by right-wing think tanks such as the Heritage Foundation and Center for Security Policy. During the Clinton administration, this lobby was reduced to attempting to influence the defense debate from the outside. Now, with Bush in the White House, it has staged a friendly takeover of the Executive Branch.

The Center for Security Policy, which last year alone received more than $200,000 from major weapons contractors like Boeing and Lockheed Martin, brags in its latest annual report that no fewer than 17 of its former advisory board members have been appointed to positions in the Bush administration, including Undersecretary of Defense for Policy Douglas Feith and Secretary of the Air Force James Roche. As if this weren’t enough, Rumsfeld is a long-time associate and financial backer of the center. Rumsfeld recently served as the keynote speaker at the center’s “Keeper of the Flame” awards dinner, the organization’s largest annual fundraising event.

For companies like Boeing, Lockheed Martin, and Raytheon, which have already captured more than $17 billion in long-term contracts for missile defense research, Bush’s decision represents a huge financial shot in the arm.

Still, the decision may come back to haunt the companies and their supporters in Washington, as the spotlight of public attention will increasingly be played directly on the missile shield’s glaring technical and strategic flaws.

o The most “advanced” element of the system, a ground-based interceptor designed to destroy incoming nuclear warheads in flight, has succeeded in three out of five tests — all of which were rigged to produce a positive result. As the Union of Concerned Scientists noted in a recent report, each test to date has involved using a transponder in the target missile which emits a signal and guides the interceptor to within 400 yards of the mock warhead. Real enemy missiles, of course, are unlikely to feature transponders.

o The booster rocket that will be used to launch production versions of the interceptor is years behind schedule. In a test conducted earlier this month, a prototype of the booster exploded shortly after launch, littering the beaches in coastal areas near California’s Vandenberg Air Force base with debris.

o The Navy has announced that the simplest version of a sea-based missile interceptor system, the Navy Area Wide system, is being canceled due to poor performance and major cost overruns.

None of these problems were caused by the ABM Treaty. In fact, it’s quite likely that still more flaws in the missile shield program will be exposed once the treaty is fully abandoned and more demanding tests — now outlawed by the treaty — can be conducted.

Moreover, even if a missile defense system could be developed, Senate Foreign Relations Committee chairman Joseph Biden (D-Del.) has rightly reminded us that the U.S. government’s own top intelligence analysts believe that a ballistic missile is the least likely way a terrorist group or rogue state would choose to attack the United States.

In the end, the only obvious value of the Bush administration’s missile defense program — aside from its efficiency in lining the pockets of defense contractors — is as part of a larger campaign to establish long-term US military dominance on earth, at sea, in the air, and in outer space. Now that campaign — a great unilateralist fantasy — has claimed its first victim in the ABM treaty. The star wars lobby has won round one, but the battle over the future of US security policy is still far from over.