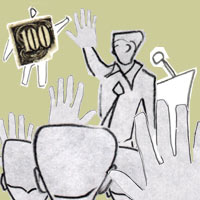 Someday, I believe our kids will ask us in wonderment, “You mean, people used to have to be rich or know a lot of rich people in order to get elected?” the same way they might now exclaim, “You mean, blacks were once slaves?” or “Women didn’t have the right to vote?”

For anyone who shares that belief, August 1 was an important day in American history. That was the first day that people seeking major statewide offices in Arizona and Massachusetts could start their campaigns free of the corrupting influence of private campaign contributions. Both states are on the cutting edge of the Clean Elections movement, in which candidates who agree to raise little or no private money and abide by strict spending limits can receive full public financing for their campaigns.

It’s a promising new phase for the movement to liberate American democracy from the dominance of big money, not unlike the late 1890s, when a few pioneering states granted women the right to vote. Today, candidates for office in four states — Maine, Arizona, Massachusetts and Vermont — can run full-fledged campaigns for various offices without having to depend on wealthy private donors.

Unlike conventional approaches to campaign finance reform like the McCain-Feingold/Shays-Meehan bills, which focus on limiting how private money can be given and spent around elections, Clean Elections makes a complete break with the existing system. Under Clean Elections, once prospective candidates qualify by collecting a large number of very small contributions, they are completely freed from the private money chase. A candidate’s ability to excite voters suddenly becomes more important than their ability to raise cash.

This approach had its first major successful run in 2000, when an array of Clean Elections candidates — Democrats, Republicans, and Greens, incumbents and challengers — ran for the state legislatures in Maine and Arizona. (Only a few minor statewide offices were up for election in Clean Elections states that year. And federal law currently prevents the states from applying the system to congressional races.)

More than 150 candidates ran “clean,” including waitresses, single moms, librarians, and former welfare recipients running for the first time along with incumbents thrilled to be free of the crushing grip of lobbyists. Overall spending on campaigns dropped in Arizona, and both states saw fewer uncontested races, and, most significantly, a subtle reduction in the influence of special interests.

Last spring, for example, Maine took a big step toward creating a single-payer health care system, thanks in part to the fact that about one-third of its legislature is made up of people who ran “clean.” Previously, says Rep. Paul Volenik, the Democratic sponsor of the single-payer plan, he couldn’t even get all his fellow Democrats to support the bill. But this year,”the insurance industry’s influence has been diminished, and a portion of that is due to Clean Elections,” he says.

“The business lobbyists left me alone,” confirms state Rep. Glenn Cummings (D-ME). “I think they assumed I was unapproachable. It sure made it easier to get through the hallways on the way to a vote!”

In the current election cycle, more high-level offices than ever before are open to candidates participating in Clean Elections. Since August 1, anyone seeking statewide offices like governor, attorney general and treasurer in Arizona and Massachusetts has been able to start the process of collecting the thousands of small qualifying contributions they need to qualify for full public financing. So far, the response has been heartening.

In Arizona, all eight of the announced candidates for governor — four Democrats, three Republicans and an independent — have either declared their participation in Clean Elections, or are seriously exploring that option by voluntarily limiting their early contributions. In Massachusetts, four gubernatorial candidates have also declared their intention to run “clean.” Twenty-one candidates for other statewide offices in those states have also indicated their interest in doing so.

The array of candidates for governor in the two states includes a former Republican congressman, two current secretaries of state, two current state treasurers, a sitting attorney general, a former speaker of the house and a former secretary of state. All of these people were successful under the old system of private financing, and presumably could have chosen to run that way again, but haven’t.

Part of the reason is the Clean Elections system offers them serious money, with funding based on the average of what it cost to run a competitive race for that level office in the last two election cycles. Each state’s system is slightly different. In Arizona, a gubernatorial candidate must collect 4,000 qualifying contributions of $5 each in order to receive a grant of $409,950 for the primary and $614,930 for the general election campaign. Prior to that, while exploring their options, they are allowed to collect a maximum of $42,440 in “seed money” contributions of no more than $110 per individual. Spending is capped at those amounts.

In both states, additional matching funds will be given — up to a certain point — if a candidate faces a high-spending opponent, or if an outside group makes independent expenditures to influence the election. Right now, if all of Arizona’s gubernatorial candidates decide to stay in the Clean Elections framework, they will compete on a basically level playing field. In Massachusetts, where three other candidates — including the sitting Republican governor — have indicated that they will likely run with private financing, each of the “clean” candidates for governor could ending up receiving $6.5 million in public funds. That’s more than any privately financed candidate has ever spent.

In Arizona, the money comes primarily from a tax on lobbyists and a surcharge on civil and criminal fines. In Massachusetts, the money has to be directly appropriated from the state treasury. That has been a serious stumbling-block; entrenched incumbents, led by Democratic House Speaker Thomas Finneran, have tried to undermine the law by starving its funding. Finneran says he’s philosophically opposed to giving taxpayers’ money to politicians — even though voters supported the Clean Elections initiative by a 2-1 margin — and that the money needed will draw away from more important funding priorities — even though it’s less than one-tenth of a percent of the state’s $22.8 billion budget.

“We are fighting a battle royal to fully fund the Massachusetts system, with protests in legislators’ districts, phone-ins and even angry editorials from the conservative Boston Herald demanding the legislature respect the people’s will,” says David Donnelly, director of Mass Voters for Clean Elections. “Winning this is probably the most important national campaign finance reform fight of the year.”

Donnelly is right, because the states have always been laboratories for reforms that later went national. Despite the legislative impasse, statewide candidates in Massachusetts are moving ahead with their efforts to qualify for public funding. And the law is having subtle but profound effects. Massachusetts State Treasurer Shannon O’Brien, considered by many local observers to be the leading Democratic candidate, recently told the Boston Herald that the choice of running “clean” was “liberating.”

“I have more time to spend with more people and new people,” she said. “I was at a Laborers Union picnic and I talked to and shook hands with probably 100 people, instead of just dropping in, saying a quick hello, shaking just a hand or two and rushing off to some fund-raiser.”

This is democracy the way it oughta be: candidates focusing their time wooing average voters, not big donors, and people standing for office because of the strength of their ideas, not the size of their wallet.