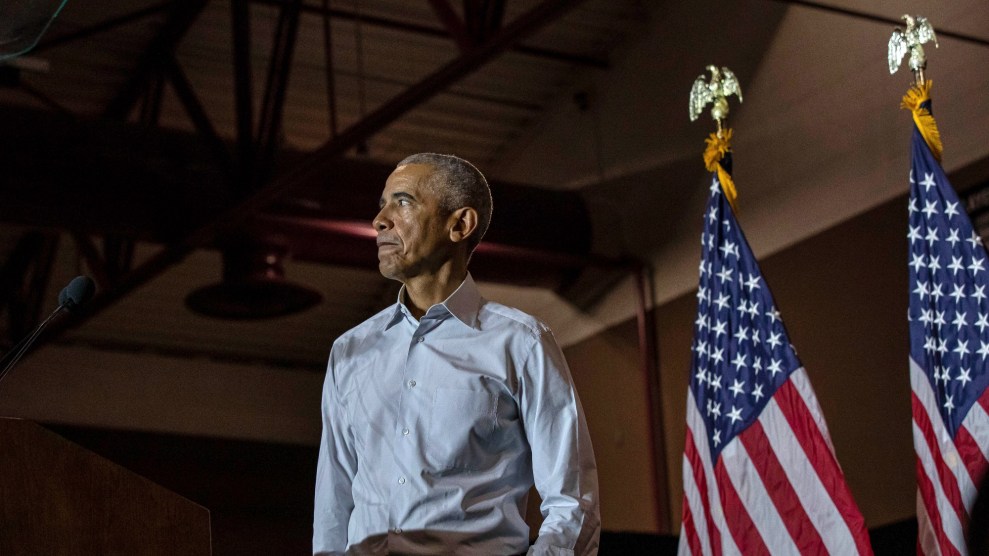 On Wednesday, both President Joe Biden and former president Barack Obama warned that if the current far-right extremist candidates win their elections next week, the country’s democratic foundations would be at risk. The dueling speeches came as Democrats scramble to urge voters in the final stretch before next week’s elections to reject election deniers on the ballot around the country.

“If you’ve got election deniers serving as your governor, as your senator, as your secretary of state, as your attorney general, then democracy, as we know it, may not survive in Arizona,” Obama told attendees at a rally in Phoenix, Arizona. “That’s not an exaggeration. That is a fact.”

Obama specifically called out GOP gubernatorial candidate and former news anchor, Kari Lake, mentioning that she’d once interviewed him while he was president in 2016. In his story, Obama characterized Lake as a grifter, urging Arizonans not to elect someone based on their celebrity.

Obama in Arizona on Kari Lake: "Listen, if we hadn't just elected somebody whose main qualification was being on TV, you could see maybe giving it a shot." pic.twitter.com/PVx0W2mcrQ

Lake is one of the most vocal election deniers in the GOP, even going as far as to call for the imprisonment of Arizona’s secretary of state—and Lake’s current opponent, Katie Hobbs—for certifying the 2020 election results. As my colleague, Isabela Dias, previously reported:

On various occasions during the campaign, Lake has hinted at supposed attempts to steal the primary election, but she has refused to provide any evidence to support her claims. “I’m not going to clarify it,” she recently said on a radio show. “We are on to some things that are very suspicious and possibly illegal. We’re working on it. I don’t want to ruin the investigation.” The chairman of the Maricopa County Board of Supervisors, which oversees elections in the state’s largest county, called her allegations “beyond irresponsible.” As part of her election integrity platform, Lake has proposed a ban on ballot-counting machines.

“As I stand here today, there are candidates running for every level of office in America — for governor, Congress, attorney general, secretary of state—who won’t commit, they will not commit to accepting the results of the elections that they’re running in,” Biden said.

“This is the path to chaos in America. It’s unprecedented. It’s unlawful. And it’s un-American.”

Since the January 6 attack on the US Capitol, reports of armed protesters showing up at polling locations have mounted. As my colleague Tim Murphy reports in his recent dispatch from Maricopa County:

“They’re at the polls right now, 24/7, making sure that they’re intimidating the people that are going to vote,” an organizer tells the volunteers in attendance, referring to the right-wing dropbox-watchers. “They’re trying to stop us from voting, they’re trying to stop us from turning it in, so it’s our job as well to empower these individuals that we’re gonna be talking to that they have a right to be at the freaking polling location.”

While Biden never mentioned Trump by name on Wednesday, he directly called out the former president’s attempts to overturn the 2020 election results.