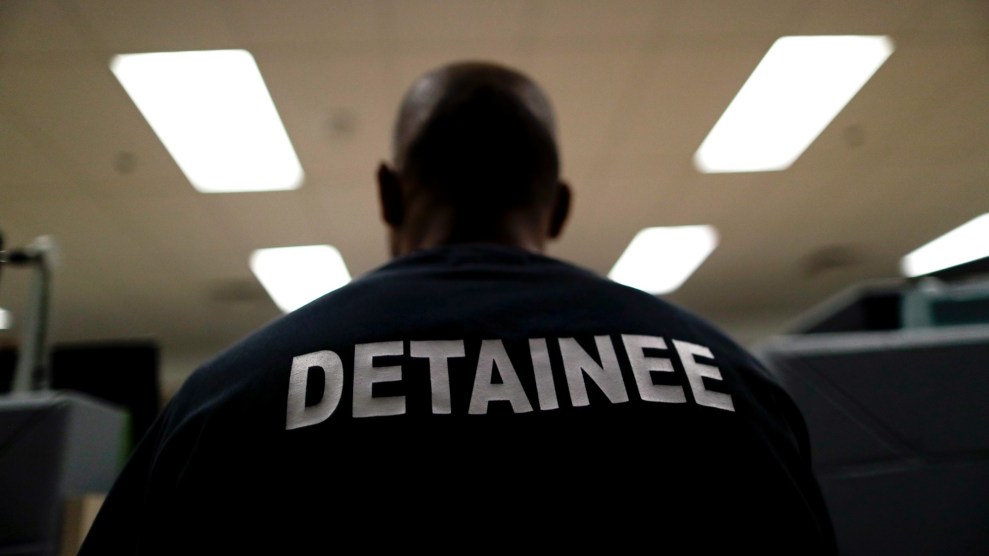 A detainee sits at the Otay Mesa Detention Center in California.Gregory Bull/AP

The Supreme Court on Monday issued two decisions on immigration-related cases that, while less high-profile than the pending “Remain in Mexico” case, could have far-reaching implications for detained immigrants.

In a blow to the rights of detained immigrants, the Supreme Court ruled in Johnson v. Arteaga-Martinez that federal law doesn’t require the government to grant bond hearings to them after six months of detention to prove that they are at risk of flight or pose a danger to the community. “On its face, the statute says nothing about bond hearings before immigration judges or burdens of proof, nor does it provide any other indication that such procedures are required,” Justice Sonia Sotomayor wrote in the 8–1 opinion, in which Justice Stephen Breyer concurred in part and dissented in part.

In this case, Antonio Arteaga-Martinez, a citizen of Mexico who faced deportation proceedings and sought relief based on a fear of persecution or torture in his home country, was detained in the custody of the Department of Homeland Security for four months. After that period, he filed a petition for habeas corpus with a district court in Pennsylvania challenging his continued detention without a bond hearing. The district court had sided with Arteaga-Martinez, ordering the government to grant him a bond hearing before an immigration judge. The government appealed, but the appeals court affirmed the prior decision. At the bond hearing, an immigration judge authorized his release under supervision pending a decision on his deportation case. The Supreme Court reversed the rulings from the lower courts, finding that immigrants detained for longer than six months aren’t entitled to bond hearings.

Justice Clarence Thomas suggested the court should overrule a precedent under another case known as Zadvydas v. Davis that prevents the government from detaining immigrants indefinitely. Mary Yanik, director of the Tulane Law School’s immigrant rights clinic, said on Twitter that such a reversal “would be a radical departure” from existing protections and result in no constitutional rights for people facing deportation.

The justices also ruled on a related case, Garland v. Gonzalez, which consolidated two class-action suits brought on behalf of immigrants in similar circumstances as Arteaga-Martinez. In a 6–3 vote, the Justices also decided that immigrants trying to challenge their detention can’t seek relief from lower courts on a classwide basis. Instead, they have to individually petition the courts, which effectively makes it harder for immigrants to challenge immigration policies. “Injunctive relief on behalf of an entire class of aliens is not allowed because it is not limited to remedying the unlawful ‘application’ of the relevant statutes to ‘an individual alien,” Justice Alito wrote for the majority.

The ruling, Justice Sotomayor wrote in a partial dissent, “risks depriving many vulnerable noncitizens of any meaningful opportunity to protect their  rights.”