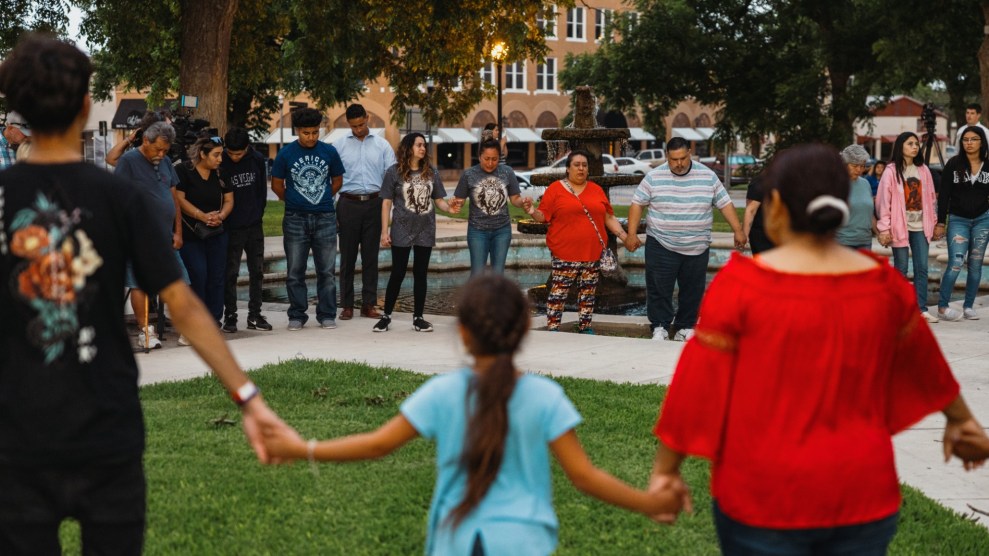 Members of the community gather at the City of Uvalde Town Square for a prayer vigil.Jordan Vonderhaar/Getty

Hours after yet another mass shooting killed 19 children and two teachers at Robb Elementary School in Uvalde, Texas, desperate parents were still trying to find out if their kids were dead or alive. They were asked to provide DNA samples to help with the identification of the victims as reporters at the scene described the sound of “agonized screams” from families who had just learned the worst possible news.

In a community like Uvalde, about 85 miles west of San Antonio and not far from the border with Mexico, the unfathomable grief and trauma might be further complicated by the fear of immigration enforcement. The immigration status of the victims and families continues to be rightfully undisclosed, but the school district’s population is 90 percent Hispanic, leading to concerns by immigrant rights advocates that the presence of Department of Homeland Security (DHS) agents might further traumatize relatives in mixed-status families seeking information from authorities and trying to reunite with their children.

Agents with Customs and Border Protection (CBP), the branch of DHS that operates within a 100-mile border zone, were among the first law enforcement to respond to the shooting. That isn’t surprising considering that Uvalde is a heavily militarized area of South Texas and many agents reside in the area and some had children in the school. Roughly 80 border patrol agents, some of whom were off duty, were present at the scene. Among them were members of the SWAT-like elite team known as BORTAC, or Border Patrol Tactical Unit, who reportedly shot the 18-year-old gunmen. That’s the same unit that Donald Trump deployed to Portland as part of a violent crackdown on racial justice protests in the summer of 2020 that the city’s mayor Ted Wheeler characterized as “urban warfare.” At the time, a former CBP agent told the Guardian that, in her experience, BORTAC were among “the most violent and racist in all law enforcement.”

Border patrol agents may have prevented the shooter from continuing to carry out a massacre on Tuesday, but there’s no denying their presence could be triggering for people in the community. “The same officer involved in deportation of your family member could now be telling you your child has died…this is what systemic trauma looks like,” Thania Galvan, an incoming assistant professor at the University of Georgia’s Department of Psychology tweeted.

Uvalde is ~80% Latinx w/ large immigrant pop. U.S CBP assisting w/ response b/c it’s the biggest law enforcement agency in area. The same officer involved in deportation of your family member could now be telling you your child has died…this is what systemic trauma looks like.

Juliette Kayyem, a DHS assistant secretary during the Obama administration, called on the agency and the White House to explicitly reassure the Uvalde community that they would be safe from immigration enforcement. “I don’t know motives, we don’t know motives. I am just telling you demographics. It is a predominantly Hispanic population with a large immigrant community, relatively near San Antonio,” Kayyem said on CNN. “We need the federal government to say right now, everyone is essentially safe harbor right now in terms of immigration status.” She noted that members of the community needed “not to be fearful of immigration status,” and pointed out that a strong law enforcement presence was inevitable under these circumstances. But, when someone’s immigration status may be uncertain, they may “not react to police presence as you or I may.”

Uvalde is over 80% Hispanic, with large immigrant community. I do not know any motives, just demographics. One thing needs to be made clear by feds: no immigration enforcement, no questions asked, safe harbor, get your kids, do not hide, etc. Now.

On Wednesday, DHS issued a statement saying that “to the fullest extent possible,” its agencies—Customs and Border Protection (CBP) and Immigration and Customs Enforcement (ICE)—would not conduct enforcement activities in “protected areas,” adding that agents would not “pose as individuals providing emergency-related information.”

But the fact that DHS felt the need to issue a statement saying its agents wouldn’t disguise as helpers in the aftermath of a mass shooting at an elementary school in itself could spark concerns in the community. Especially in a state that is controlled by aggressively anti-immigrant politicians. Texas Governor Greg Abbott has spent billions of dollars and deployed thousands of National Guard and state troopers in a failed operation to “secure” tbe border, and the state has led a successful lawsuit against the Biden administration to stop the termination of Title 42, the infamous pandemic-era border policy shutting down asylum. Just a couple of weeks before the shooting, Abbott indicated he might challenge a Supreme Court decision guaranteeing the right to public education for undocumented students.

As immigration and criminal law expert César Cuauhtémoc García Hernández noted on Twitter, ICE deported a survivor of the 2019 Walmart shooting in El Paso, Texas. The undocumented woman known as Rosa had offered law enforcement assistance in their investigations into the white supremacist attack targeting Latinos that killed 23 people and injured dozens more. But, two years later in 2021, her previous help didn’t stop the immigration agency from sending her back to Mexico after a traffic stop. She was also reportedly in the process of applying for a U visa, which offers temporary status and protection from deportation for undocumented survivors of certain crimes who cooperate with law enforcement.

“It is shocking to me really that after seeing all the different communities it has happened in, we still don’t believe that it can happen in our own community and if we’re not willing to do something,” Mary Ann Jacob, a survivor of the Sandy Hook shooting that happened ten years ago, told ABC News. “Our legislatures are not going to do anything, unless we push them to do something. So vote for people who care about what you care about and make sure that they are going to drive change.” While some elected officials offer their rehearsed thoughts and prayers, Uvalde survivors and their relativeswill be left to mourn and process this tragedy for months and years to come. They should be allowed to do so without wondering whether they might put themselves or their families at risk. As Dr. William D. Lopez, a professor at the University of Michigan School of Public Health who studies the health impacts of law enforcement violence in the US told Prism, “deportation upon death is not how a community will heal.”