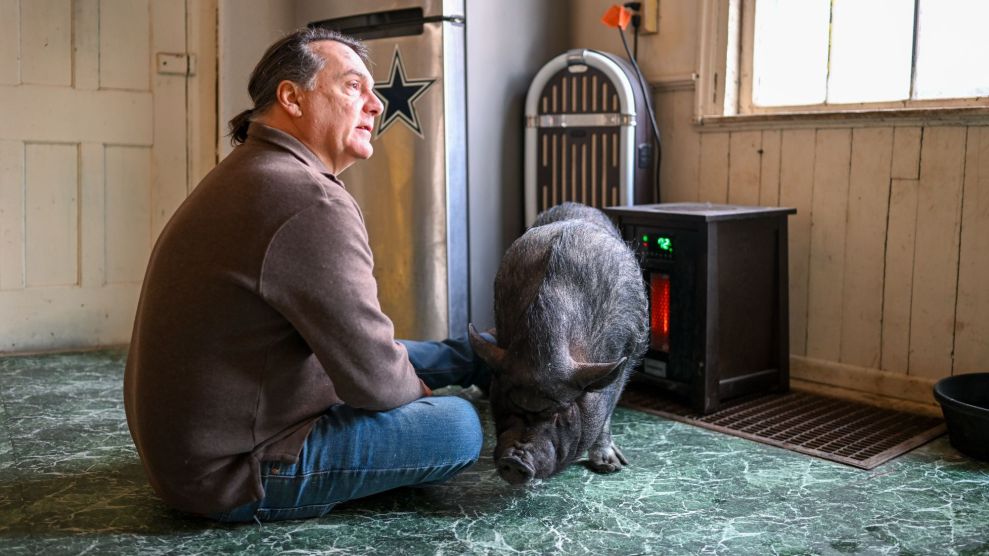 In Chinese political philosophy, the ancient school of legalism promoted strict adherence to the letter of the law, sometimes issuing draconian punishments for minor infractions. The idea, wrote astrologer Sima Tan, was to be “strict and have little kindness,” in order to bring a fairness that does “not distinguish between kin and stranger.”

I had to wonder, today, if there are serious adherents to this doctrine in the upstate New York village of Canajoharie—because they’re being pretty aggressive about saying a seemingly nice guy can’t have a cute pet pig.

In fact, Wyverne Flatt, the upstate man and pig owner, could go to jail for refusing to give away his emotional support pig because it violates “zoning laws” that prohibit having farm animals in the town.

Flatt told the Associated Press that he’s raised black pot-bellied pig Ellie since she was a piglet and that she helped him handle a divorce and the death of his mother. Ellie’s presence, he claims, helped him get his anxiety under control and wean himself off medication. However, the Disney villains on the Canajoharie village board are threatening him with jail time unless he gets rid of her. Flatt currently faces a criminal trial and a potential sentence of up to six months in jail. On top of that, a civil case could fine him $20 for every day he’s had Ellie at his house—about $18,000 in total.

“I could never dream of giving away somebody who’s part of my family,” Flatt told the Associated Press. “She’s very smart. She’s more intelligent than my dogs. I think she can kind of hone in on you when you’re feeling bad because she’ll want to come in and snuggle with you.”

There’s a lot here. Sending this man to jail would be a gross, and emblematic, example of the overcriminalization of life. The zoning law citation makes this one of the weirdest examples of NIMBYism I’ve ever read. But mostly, I just want to say: Ah fuck man I’m crying, this guy just loves his pig, don’t take it!

And these cops are making it sound like he’s trying to speed societal collapse.

In a court filing, a lawyer for the village described tolerating Ellie’s presence in the village as the first step toward total anarchy, writing “if every citizen were to openly scoff at the Village zoning codes…we would live in a lawless society.”

But nobody else seems to mind Ellie except the hall monitors on the village board. Some of Flatt’s neighbors have signed affidavits saying that they like the pig. Others even accompanied Flatt to his court appearance and to a village zoning board hearing, where they held a small protest. Flatt told the Daily Gazette that he’s “dumbfounded” that officials have pursued the case with such single-minded devotion.

“My pig is not a farm hog,” he said. “It’s not used for meat. It’s a companion animal. And yet we’re still going through with this. There is nobody being bothered by this pig. All this pig is here to do is help me.”

The court fight hinges on whether Ellie can most reasonably be characterized as an emotional support animal or as livestock. Flatt does seem to be on shaky ground here: the only evidence he’s presented is a laminated card that he reportedly obtained online for a fee, and which doesn’t carry much legal weight. However, the legal question here is distinct from the human one, namely: will anyone benefit from locking Flatt in jail for six months and taking his pig away from him?

The story appears to be an entry in what my colleague Inae Oh likes to call “the fucked up, bizarre criminalization of everything” beat. State laws are overflowing with obsolete statutes that range from the stupid (“horses on the highway must wear sleigh bells”) to the harmful. In New Jersey, police have stopped Black cyclists “acting suspiciously” and cited a 19th-century law mandating that all bikes must be equipped with bells as justification.

But look, I might also be missing something. I’m an outsider, and I don’t know if this village has been traumatized before by pig-related shenanigans. But that caveat aside, this whole situation seems very sad. And it’s frankly insane to criminalize, with the threat of potential jail time, having a pig. In fact, I want this guy to keep his pig. Unless there are herds of wild pigs stampeding through Canajoharie on a regular basis, I am pro-pig and likely to stay that way.