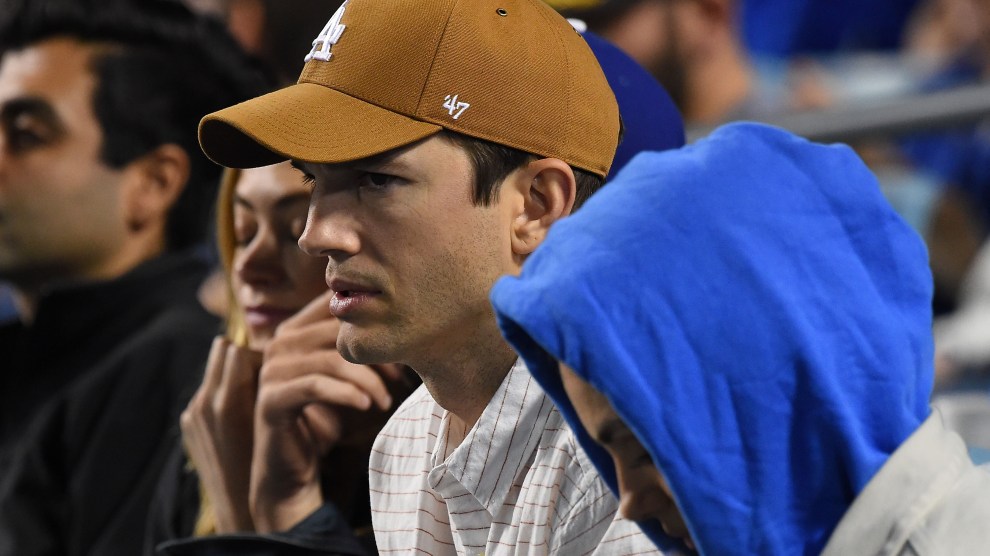 John Krasinski, it gives me no pleasure to inform you that there is a new stereotypically attractive white guy in Hollywood who very publicly loves the Central Intelligence Agency. Ashton Kutcher is coming for you.

You’re thinking, “the bonehead from ‘That ’70s Show‘ is a CIA asset? The guy who sat on a stool and scared the shit out of celebrities before popping out and cooly telling them ‘you’ve been Punk’d’?”

The thought never crossed my mind about Kutcher’s relation to the security state until today when I stumbled onto an Instagram post of two screenshots from his Twitter. The tweets:

From 2009: “spent the afternoon picking the brain of a former CIA guy. It really makes you wonder if anything you come in contact w/ is not manipulated.”

From 2018: “Just sending out a morning shout to the men and woman of the intelligence community that keep us safe and protect our country. #gratitude #ty,” with a photo of a haggard pic of Kutcher drinking his morning joe out of a CIA mug.

OK. What’s going on here? I went to Twitter and saw a separate Kutcher video had gone viral. In it, Kutcher explains how TikTok might actually (at least partially) be a Chinese psyop to influence the minds of Americans. (TikTok is owned by ByteDance, a Chinese company.)

“If I’m China and I want to think about a problem in that area of the world, specifically a naval problem in that area of the world, in the South China Sea, I would probably want to use TikTok to influence the minds of Americans in an anti-U.S. propaganda, anti-Taiwanese propaganda effort,” Kutcher said on American Optimist, the podcast of venture capitalist and Palantir co-founder Joe Lonsdale, “to make any kind of war from the United States extraordinarily unpopular in order to defend the South China Sea.”

There is a tremendous meta-irony in Kutcher, a famous and well-liked celebrity, talking about the Chinese government using entertainment to influence American sentiment about geopolitics, as he talks about geopolitics.

Maybe he just reads the Economist a lot and has become a hawkish foreign policy guy as a hobby. I don’t know, but it’s weird. So, as a professional journalist, I tried to ask him about it.

“Does Ashton do any work with the CIA or other U.S. national security agencies/does he want to?” I wrote in one of the most stupid but justified emails I’ve ever sent in my life to the PR company that represents Kutcher, K21. I haven’t heard anything back yet, and I don’t think I will.

Google was obviously not much more helpful than K21 but I still found an article that is in the weird matrix of Ashton Kutcher’s fascination with the CIA and American geopolitical interests.

In 2018, on the red carpet for the premiere of “The Spy Who Dumped Me” an ET reporter asked Mila Kunis, whose ex-boyfriend ends up being a spy, about how she’d react if she found out Ashton Kutcher was a spy.

“I’d be like, ‘I knew it!'” she responded. “I wouldn’t put it past him…He also has multiple jobs, like, not everything adds up where I’m like, ‘What do you really do? What is this office you claim to go to, and why is there many different locations of this office?”

Maybe Kunis wanted to give an interesting answer as she promoted her new movie (this is likely), or maybe she was using a reverse psychology deflection (this is unlikely). Who’s to say?

Maybe you’re wondering “If Kutcher was a CIA asset wouldn’t he want to be secretive about it?” You clearly haven’t lived in D.C. if you think that. People who probably work in the intelligence community in D.C. desperately want you to know that they do while being cagey about it. The “tell me you’re [x] without telling me you’re [x]” meme format was potentially accidentally created by some 26-year-old intelligence analyst in Arlington who was workshopping ways to get Tinder dates without getting in trouble at work.

Either way, I don’t know. I’m just asking the questions—specifically about if Ashton Kutcher is an asset of the CIA.