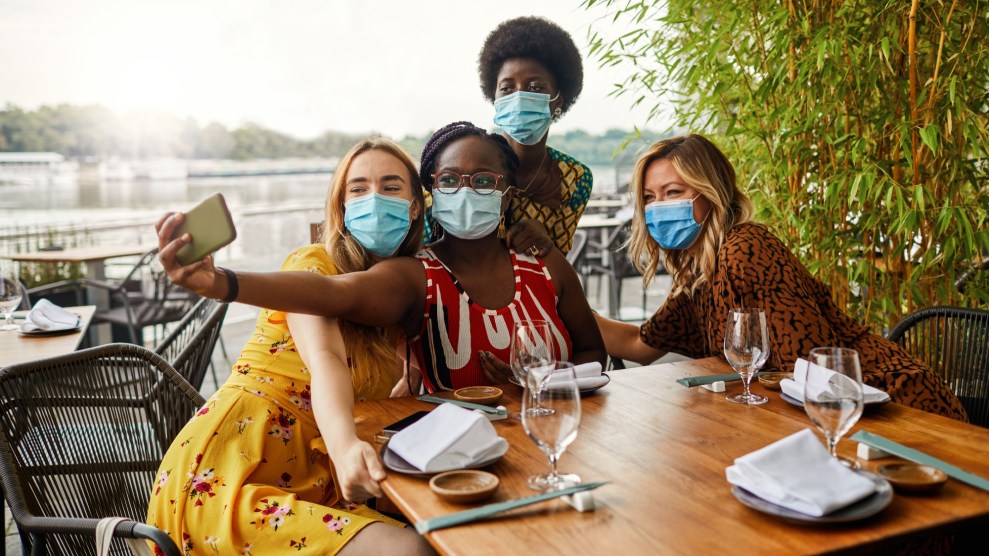 If you thought the mask culture wars couldn’t get any more absurd (remember the unmasked white woman who went on a tirade about her alleged breathing problems at a California grocery store?) you were sadly mistaken. As more people get vaccinated and states begin lifting public health restrictions, anti-maskers and others desperate for attention have found a new way to be outraged and offended. Still emboldened from the glory days of rejecting masks as a form of loyalty to their leader, then president Donald Trump, or burning them at protests, or concocting lies about their efficacy, now they’re firing up the outrage machine simply because they saw a person with their face covered.

Although millions of people are vaccinated and the Centers for Disease Control recently issued new mask guidance, there are still plenty of reasons to continue wearing a mask. Maybe you or a loved one are unvaccinated for a medical reason. Perhaps you enjoyed not having the common cold in the last year, or the business where you’re shopping requires one. Or maybe you just enjoy provoking unhinged tweets from conservatives! Take Daily Wire writer and commentator Matt Walsh who is still reeling from witnessing the horrors of people wearing whatever they want.

Wearing a mask when it is not medically necessary is grotesque and unhuman, an attack on society itself. It feeds paranoia and fear. You are treating air like it is toxic and other humans like they are nothing but vessels of disease. It is disgraceful, arrogant, and offensive.

“It is disgraceful, arrogant, and offensive.” The same people who insisted it was their constitutional right to not wear a mask and spread coronavirus to every grocery store employee are now grabbing their smelling salts at the thought of some people exercising their right to cover their face whenever they want.

Walsh is not alone. Author and commentator J.D. Vance couldn’t believe his eyes when he saw a group of people in a row boat wearing masks. Never mind the fact that he didn’t know anything about the rowers, he automatically concluded that they were “insane.”

I’m in DC today and just saw a group of girls on the Potomac rowing—outside in the sunshine—all of them with masks on. Just totally insane.

And of course, one can always count on Fox News’ Tucker Carlson to exaggerate and amplify what’s triggering conservatives these days. Earlier this week, the conservative television host described mask-wearing as a new “mental health crisis.” In an opinion piece for Fox News, Carlson, in his identity as a mental health specialist, wrote, “It’s a neurosis, just like obsessive hand-washing. But it appears to be spreading fast, like its own virus.” He also asked: “What do we do with people who refuse to shed their mask?” Carlson could start with minding his own business. Hundreds of people are still dying from coronavirus every day, and tens of thousands more are still getting infected. The question he should be asking is how does the US plan on increasing vaccine rates so those numbers come down.

Since the pandemic began, all we heard from those on the right was that it was their god-given right to enjoy indoor dining, shop without a mask, and eat dry turkey at Thanksgiving with 30 of their closest family and friends. But now, someone choosing to wear a piece of cloth on their face for however long they would like constitutes a “crisis.” Why aren’t those so-called freedoms and right to self-determination that they moaned about for months on end ever extended to anyone outside of their right-wing bubble?

Once again, the conservative narrative reveals itself to be a nothing but contradictions and lies. They didn’t have to listen to the CDC when the agency was advising mask-wearing, but now that the federal government has revised its policy, it’s abhorrent that those people are ignoring the science. But in fact, what it really reveals is that the anti-maskers and their cronies never really cared about freedom, they only cared about control.