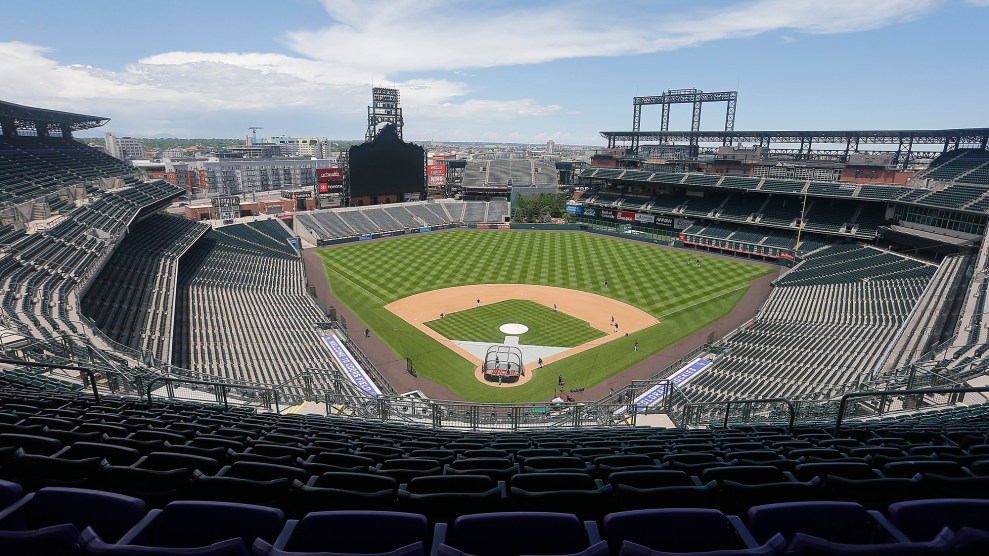 Being a willing fan of the Colorado Rockies is not easy. Our team is a national punchline, and we’re starting off the 2021 season having traded away Nolan Arenado, a once-in-a-generation third baseman whose only crime was to ask for the team to try. Arenado is now playing for an actual baseball team, the St. Louis Cardinals, and the Rockies even paid the Cardinals $50 million to take him. Between the Arenado/Rockies divorce, the depressing intransigence of management, and the general state of play over the last couple of years, things haven’t been exactly fun.

But on Tuesday, Colorado baseball got a very rare bit of good news: Denver’s Coors Field will play host to this summer’s All-Star game, after Major League Baseball decided it did not want one of its premiere events associated with Georgia’s new laws that will make it harder for people to vote.

“Major League Baseball fundamentally supports voting rights for all Americans and opposes restrictions to the ballot box,” Major League Baseball Commissioner Rob Manfred said in a statement announcing it would yank the event. “Fair access to voting continues to have our unwavering support.”

The selection makes perfect sense: Colorado’s election laws have helped foster one of the nation’s highest levels of voter turnout. Despite that, once the game landed in Denver, Republicans and conservatives immediately howled hypocrisy, ludicrously claiming the state has more “restrictive” voting laws than Georgia. To do so, they cited Colorado’s own voter ID rule, and the fact that the state has two fewer in-person early voting days than Georgia now will.

While that last bit is technically true, it’s pretty irrelevant to Coloradans, the vast majority of whom vote by mail on ballots mailed to them automatically by local governments weeks before Election Day. Meanwhile, Georgia’s new law cuts the time voters can request an absentee ballot in half and bars election officials from even mailing out absentee ballot applications.

As for ID, as was quickly pointed out by the Washington Post and others, there are major differences between Colorado’s existing requirements and Georgia’s new ones. For the relatively small amount of Colorado voters who turn out in person, the state’s voter ID requirements are classified as “non-strict” by the National Council of State Legislatures. For one, they accept a broader range of documents then Georgia’s new “strict” requirements. And if a voter can’t produce acceptable ID, they can vote by provisional ballot, “at which time,” according to the Post, “elections officials are charged with verifying their eligibility.” Under Georgia’s new rules, voters forced to cast provisional ballots because they can’t produce a photo ID are tasked with, on their own, presenting one to officials within 72 hours. When it comes to mail voters, the overwhelming majority of Coloradans usually don’t have to worry about ID, while in Georgia, all mail voters will now have to provide some proof of identification, every time they send a ballot.

Major League Baseball’s decision wasn’t made in a vacuum, and was made even though it knew the sport would invite inevitable blowback based on former President Donald Trump’s false claims that Georgia’s 2020 elections were fraudulent. The state’s top election officials, including the Republican secretary of state, have said the notion is utterly unfounded.

That’s why White House Press Secretary said Tuesday that Georgia’s laws were “built on a lie”:

PETER DOOCY: Is the WH concerned MLB is moving their All Star Game to Colorado, where voting rules are very similar to Georgia?

PSAKI: Let me refute that. CO has same-day registration, universal mail voting… it’s important to remember the context. The GA bill is built on a lie pic.twitter.com/TaDLU0mYNP

This year, us Rockies fans know we’re looking at another basement finish. We lament the loss of Arenado and wish him the best in St. Louis. But at least we can take comfort that Colorado’s election regime, widely hailed as a national model, has helped give the fans who watched him grow a chance to see him take Coors Field once more and see him play his sixth-straight All-Star game.