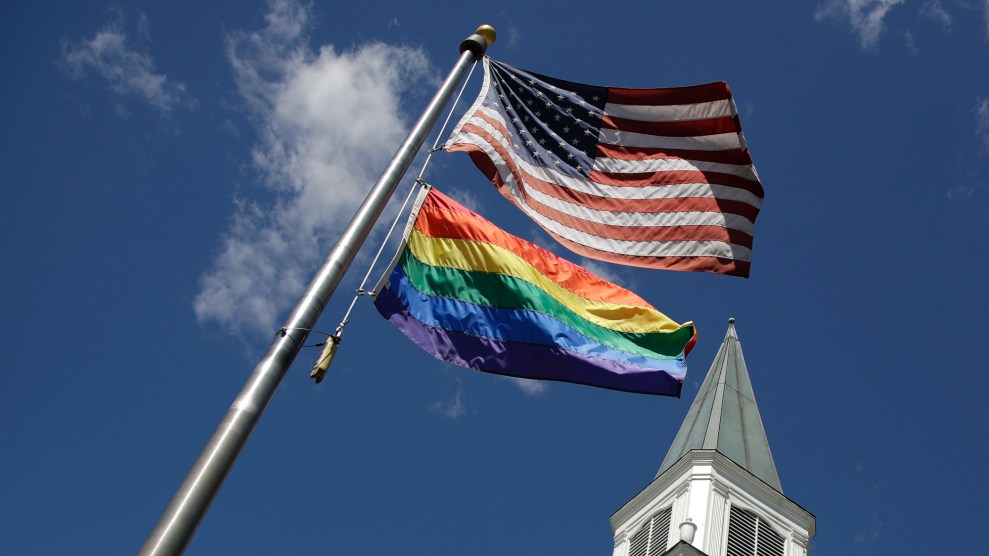 On Wednesday, the Senate Judiciary Committee convened a hearing on the Equality Act, a sweeping measure that would enshrine explicit protections for LBGTQ people into law. The bill would amend the Civil Rights Act to include nondiscrimination protections based on sexual orientation and gender identity, and override most parts of the Religious Freedom Restoration Act (RFRA) that allow for discriminatory acts based on firmly held religious beliefs.

During the hearing, Sens. Ted Cruz (R-Tex.), Josh Hawley (R-Mo.), Tom Cotton (R-Ark.), and others theorized that, if passed, the religious right would become “second class citizens” and decried the “radical Democrats’ war on women.” But there was one notable exception to the manufactured hysteria being hawked by elected officials: Marie Newman, a Democratic representative from Illinois.

Newman testified on behalf of the hundreds of thousands of families that support a transgender loved one, including her own. At age 14, Newman’s daughter, Evie, came out to her parents as transgender. Newman describes Evie’s coming out as “the happiest day of our lives, our family was whole again.”

“Still, as a mother, I knew the challenges ahead,” she continued. “My daughter would grow up in a nation where, as an example, in 25 states she could be discriminated against merely because of who she was. That was upsetting to me. She could be thrown out of a restaurant, she could be evicted from her apartment, she could be denied access to education, and denied healthcare. Just because of who she is. On top of that, the likelihood of facing hateful, vile attacks—and she has, verbal and physical—for simply existing and being her authentic self was almost a certainty. Signing the Equality Act into law isn’t going to change that reality overnight. It absolutely will not. But it will ensure that Americans like my daughter are afforded the same civil rights already extended to every other American across the nation.”

During a hearing for the #EqualityAct, a measure that would enshrine explicit protections for LBGTQ people into law, Republicans decried it as a "war on women."

The notable exception: @RepMarieNewman, who gave a powerful testimony about her own daughter. You have to watch: pic.twitter.com/eBJeUIU72S

Newman is hardly the only parent speaking out on behalf of their trans children. In February, a police officer in Alabama begged lawmakers not to outlaw gender-affirming health care for trans kids, arguing that such care saved his now-adult daughter’s life. Earlier this week, a lawyer in Missouri went before lawmakers to speak out against a bill that would ban his daughter from playing on the girl’s volleyball team. “Let them have their childhoods, let them be who they are,” he pleaded.

MUST WATCH: Brandon Boulware, the father of a transgender daughter, testifies during a hearing asking Missouri lawmakers to stop discriminating against trans youth. pic.twitter.com/bTuSoyE1nW

This is also not the first time Newman, a freshman lawmaker, has had to take a stand for her daughter in the halls of Congress. Just a few weeks ago, Newman displayed a transgender pride flag outside her office to signal her support for the Equality Act. In response, Rep. Marjorie Taylor Greene (R-Ga.) hung a sign outside her office (which faces Newman’s) proclaiming “There are TWO genders: MALE & FEMALE. ‘Trust The Science.’”

Despite the conspiracy theorist-turned-congresswoman’s opposition, the Equality Act passed the House 224-206. Should it pass the Senate, President Joe Biden is expected to sign it into law.

“Families like ours cannot afford for this legislation to fail,” wrote Newman in a recent op-ed for Time. “We cannot allow more young Americans to believe that the only two answers to the question of who they are as a person is suicide or abandonment.”