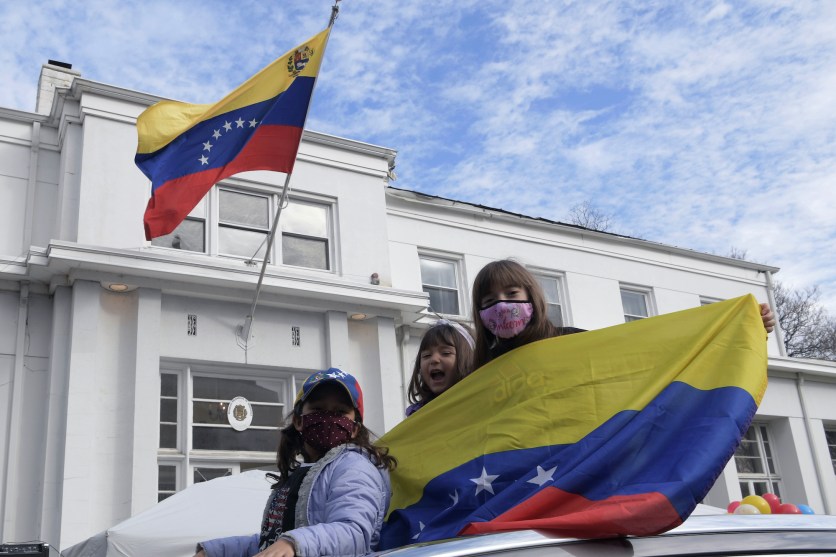 Dozen of Venezuelans in DC protest against Maduro.Lenin Nolly/Sipa USA/AP

In a significant policy change, the Biden administration will allow Venezuelans in the United States to apply for temporary protected status for a period of 18 months, effective tomorrow. TPS provides relief from deportation and work authorization to citizens of countries experiencing armed conflict, environmental disaster, or extraordinary conditions that compromise their safety. An estimated 320,000 people from Venezuela living in the US as of March 8, 2021 could benefit from the program. The Los Angeles Times first reported the shift regarding the status of Venezuelans, citing information from congressional sources.

Since 2014, more than 5 million Venezuelans have fled political turmoil, economic instability, and an ongoing humanitarian crisis under Nicolás Maduro’s socialist regime in what has become the largest exodus in Latin America’s recent history. Most have settled in neighboring South American countries, with Colombia‘s government being noteworthy for its welcoming policy. In February, President Iván Duque announced that the government will provide legal status to 1.7 million migrants from Venezuela for 10 years, a move that has been lauded as an example not only for the region, but the world.

During his presidential campaign, Joe Biden promised to extend TPS to Venezuelans living in the US. Between 2017 and 2019, Venezuela ranked among the top five countries of origin for asylum seekers coming to the United States.

Today’s decree will mark a departure from former President Donald Trump’s approach of pressuring Maduro—by imposing sanctions and showing support to the opposition leader Juan Gauidó—while denying temporary status to those fleeing widespread hunger, violence, and persecution. During his final hours in office, Trump did sign an executive order halting the deportation of thousands of Venezuelans for 18 months. But critics described it as “a political act, not a humanitarian one.”

Although the lesser-known Deferred Enforced Departure program offered similar relief to TPS, it still left many in a legal limbo to apply for work authorization and at the discretion of the next administration. The United States deported hundreds of Venezuelans back to their home country under Trump. Democrats have continued to push for TPS, a more secure form of protection.

“After years of empty rhetoric from the previous administration, today’s decision to provide Temporary Protected Status to Venezuelans in the United States marks a major victory in our efforts to build a fair and humane immigration system,” said Sen. Bob Menendez (D-NJ), who has pushed for legislation to grant temporary status to Venezuelans. “To keep deporting Venezuelans back to Maduro’s tragedy would be to tell them they are a burden on our communities, a menace to our national security, and an unwelcome guest in our country. Reality and our national interest are precisely the opposite.”

BREAKING: President Biden will give TPS for Venezuelans for 18 months until September 22!!

We worked for years in the House for TPS for Venezuelans.

Now, thanks to @POTUS tens of thousands of Venezuelans will be able to legally work and live without fear. #VenezuelaLibre 🇻🇪 pic.twitter.com/EPnSb8J7Wt