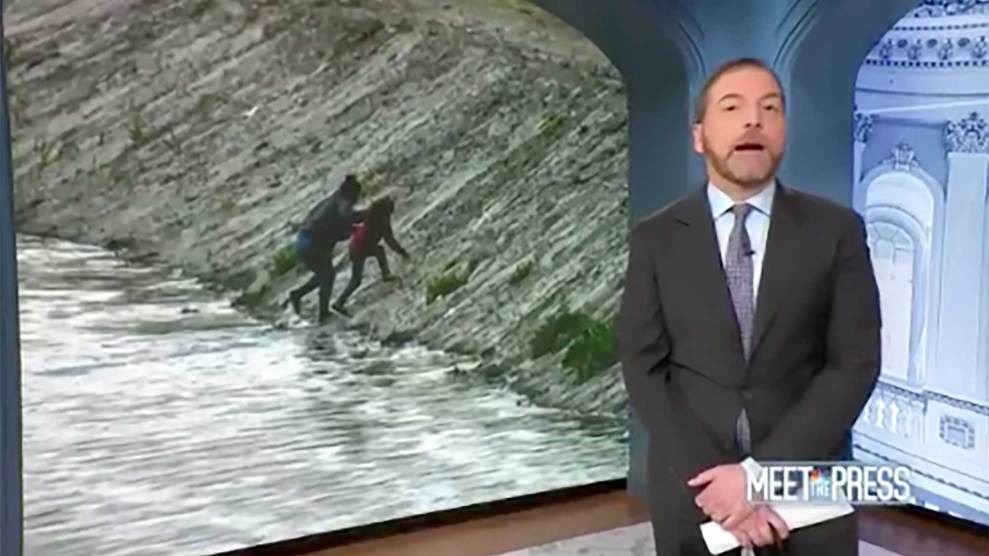 It was Border Crisis Day on the Sunday morning news shows, which meant that folks tuning in to ABC’s This Week were treated to the Powerhouse Roundtable panelists parked in front of a fence in El Paso, as if they were College GameDay hosts getting ready for a big Alabama-LSU game down in Death Valley.

ABC flew its entire roundtable to the US-Mexico border pic.twitter.com/GdLd2RU7qx

Meanwhile, Homeland Security Secretary Alejandro Mayorkas made appearances on not one, not two, not three, not four, but five different morning shows to lay out the administration’s talking points about what he called earlier this week “historic and unprecedented challenges at our border”: that migrants (and particularly children) shouldn’t come to the United States now, that the Biden administration has to rebuild a system destroyed by the Trump administration while simultaneously caring for vulnerable kids, and that that process will take time—lots and lots of time. Here he is on This Week:

"The message is quite clear: do not come."

Among his many stops, Mayorkas was a guest on Meet the Press, which is hosted by NBC’s Chuck Todd. Now, there are lots of ways to tease a broadcast about a situation in which, as the Los Angeles Times‘ Molly Hennessey-Fiske tweeted Saturday, more than 5,000 unaccompanied minors were in border agencies’ custody as of the weekend, with more than 600 of them being held for 10 days or more in poor conditions that they’re supposed to be transferred out of within 72 hours. But this uniquely vapid bit of framing—the politics are what matter the most!—ain’t it:

It's fair to call the deteriorating situation at the US-Mexican border a crisis — even if the Biden administration refuses to use that word.

But it's more than that: It's a political crisis for the new president, with no easy way out. pic.twitter.com/7mHiB8FbCl

You wouldn’t know it from Todd’s intro, but thanks to a series of asylum-killing rules implemented by the Trump administration, tens of thousands of people have been languishing in dangerous Mexican border towns, waiting for their opportunity to have their claims heard by US officials. And as BuzzFeed News‘ Hamed Aleaziz wrote in October, the Trump administration had turned away immigrant children from the border 13,000 times under a public health measure known as Title 42, which effectively sealed the border to asylum seekers starting in March 2020. (For more about the current border dynamic, check out my colleague Isabela Dias’ sharp interview with Jennifer Podkul, the vice president for policy and advocacy at Kids in Need of Defense (KIND).)

But since Republicans—scrambling in a post-Trump, post-insurrection, post-stimulus, post-Dr. Seuss world—have pivoted to making the increase in unaccompanied minors at the border their 2022 wedge issue, we’re all about to be dragged along for the ride. (Like Todd says, Biden can’t control the news cycle!) After House Minority Leader Kevin McCarthy (R-Calif.) went on Fox & Friends earlier in the week to slam the White House for what he called “more than just a crisis—this is a human tragedy,” hawk Sen. Tom Cotton (R-Ark.) said on Fox News Sunday that “the border is wide open” under Biden, despite the fact that the Title 42 border closure remains in place for everyone but unaccompanied migrant children.

Cotton, it should be noted, is calling on Biden to shut the border on these kids. That was and would be another kind of crisis—just maybe not one that’d result in wall-to-wall coverage on the Sunday morning news shows.