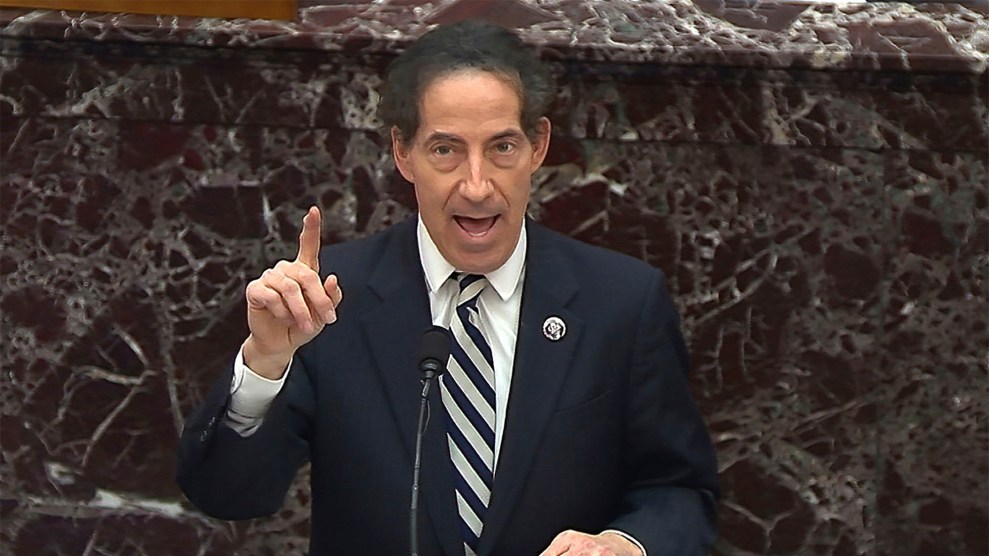 After winning a call for witnesses on Saturday morning, Democrats agreed not to call any and instead enter a statement from Republican Congresswoman Jamie Herrera Beutler detailing how Trump was asked by Kevin McCarthy to call off the mob and refused to do so. In so doing, Democrats chose not to prolong the trial even though their party controls the Senate, paving the way for a Trump acquittal Saturday evening.

House managers said the evidence they had presented over the course of the week had proved sufficient. Lead House impeachment manager Jamie Raskin quoted GOP Congresswoman Liz Cheney, who said while voting to impeach the president in January that “there has never been a greater betrayal by a President of the United States of his office and his oath to the Constitution.”

“She based her vote on the facts, on the evidence, and on the Constitution, and the evidence—the video, documentary, eyewitnesses—has only grown stronger and stronger and more detailed right up to today, right up to 10 minutes ago, over the course of this Senate trial,” Raskin said.

Beyond the information offered by Herrera Beutler, evidence introduced at trial included previously unseen Capitol security footage showing how close the mob got to top leaders, including Vice President Mike Pence, Speaker of the House Nancy Pelosi, and GOP Senator Mitt Romney. “President Trump supported the actions of the mob and he must be convicted,” Raskin said.

"How did Donald Trump react when he learned of the violent storming of the Capitol and the threats to senators, members of the House and his own vice president?"

Still, the House managers’ presentation seems to have failed to move more than, at most, a half dozen Republicans, with 44 Senate Republicans holding ahead of the trial that the exercise was unconstitutional since Trump has left office, and with similar numbers voting against a call for witnesses and now expected to vote against conviction.

But that vote won’t bring an end to inquires into Trump’s actions after losing the election. Pelosi has called for a “9/11-type Commission” to look into the Capitol insurrection. And Fulton County prosecutor Fani Willis has opened a criminal investigation into Trump’s effort to overturn Georgia’s election results, including his phone call pressuring Secretary of State Brad Raffensperger to “find 11,780 votes.”

Trump will be acquitted today. But his legal problems are far from over.