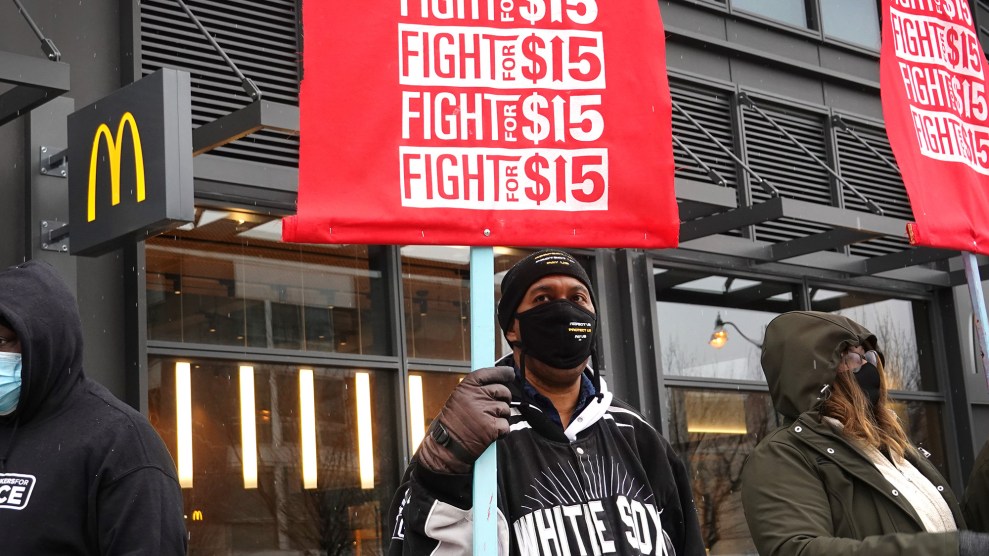 On Tuesday, fast-food workers in 15 cities across the United States went on strike to put pressure on Congress for a $15 minimum wage. Workers from Durham to Chicago walked out, holding signs demanding respect and to be paid a higher minimum wage.

The federal minimum wage hasn’t been raised since 2009, when it was increased to $7.25 per hour. But there is a chance that could change—and soon: Sen. Bernie Sanders (I-Vt.) and Democrats in both chambers of Congress have pushed to include a raise to the $15 minimum wage in the still-in-flux COVID-19 stimulus package. It’s unclear if the rules of reconciliation—the maneuver Senate Democrats plan to use to pass the bill—will allow the provision to stand, though a Monday letter from the Congressional Budget Office offered new hope that it would. (The question of whether all Senate Democrats would even support it is another matter.)

Regardless of the political calculus, workers say the pandemic has made clear the pressing need for change. “Things weren’t working for me and my family before COVID and now, things are even harder,” said Houston McDonald’s worker Gloria Machuca in an email to supporters for Fight for $15, a global movement pushing for the change. “I’m still making a poverty wage, still choosing between groceries and rent, and for nearly a year—I’ve been risking my life at work every day. Workers around the country are striking today because we’re sick of being treated like we’re disposable.”

Black Americans, who make up a significant share of frontline workers, would be particularly helped by the increase, those striking say; one out of four workers who would benefit from a $15 minimum wage is a Black woman or Latina, according to Fight for $15.

“Last year as we mourned the Black lives lost and communities of color destroyed by the pandemic, McDonald’s continued to prioritize its profits over the health and safety of workers,” McDonald’s worker Taiwanna Milligan said in a Fight for $15 statement. “During this pandemic, McDonald’s has done the bare minimum to protect us. Early on, we had to reuse masks over and over, or pay McDonald’s for a new mask. I felt like we had to take our safety into our own hands, so I decided to walk off the job and go on strike.”

It’s no surprise it’s fast-food workers galvanizing this action. In 2012, a strike among McDonald’s workers in New York City spurred the Fight for $15 movement.

Now home care and nursing home workers are joining fast-food workers in calling for higher wages, rallying outside agencies that oversee Medicaid in Atlanta, Richmond, and Los Angeles. In Milwaukee, where wind chills are forecast between -5 and zero degrees, workers planned to gather downtown and hold “$15 is COVID relief” signs ahead of President Joe Biden’s CNN town hall in the city. Some workers, including those in Houston, where many are without power, are enduring severe winter storms to call for higher wages.