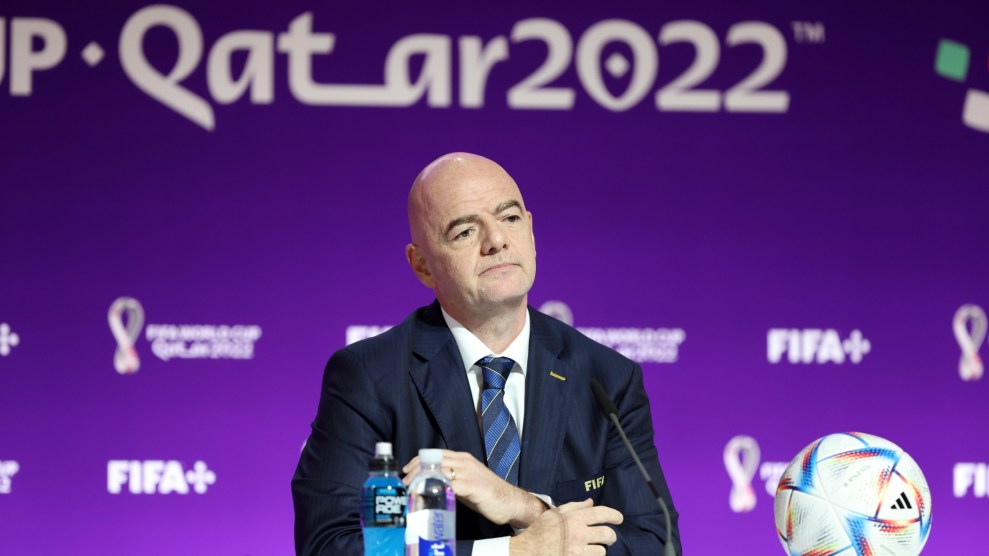 Gianni Infantino. Where does one really start? The current president of FIFA is a 52-year-old Italian-Swiss who works out of an underground fortress in Zurich, where meetings are held on the third of five basement levels because his predecessor believed that “places where people make decisions should only contain indirect light.” His current country of residence is a matter of some dispute. He once handed Donald Trump a red card in the Oval Office, to use against his critics. Vladimir Putin gave him the Russian “Order of Friendship.” He’s also friends with Mohammed bin Salman. (They watched a boxing match together). He looks like Doctor Evil, which is not his fault, but it is uncanny. Infantino presides over the cartoonishly corrupt world of international soccer governance, and the most damning thing you can say about him is that he’s a natural at it.

Although Infantino was not in charge of FIFA when members voted to award the 2022 World Cup to Qatar, he has embraced his role as the upcoming tournament’s biggest booster. He has said that the “hard conditions” faced by migrant workers in the Gulf state—where according to The Guardian, 6,500 workers have died in the country since the bid was announced—were giving those workers “dignity and pride,” and that the death toll itself had been greatly overstated. (Qatar has said that the “mortality rate among these communities is within the expected range for the size and demographics of the population.”) Earlier this month, Infantino wrote a letter to the 32 national federations participating at the World Cup, asking them to “focus on the football,” rather than get bogged down in criticism of a country that prohibits homosexuality.

Infantino, however, cannot focus on the football. Instead, on Saturday, he held a press conference that began with a statement ripped straight from the playbook of Andrew Cuomo:

“Of course I am not Qatari, I am not an Arab, I am not African, I am not gay, I am not disabled,” he continued. “But I feel like it, because I know what it means to be discriminated [against]. To be bullied. As a foreigner, in a foreign country. As a child at school, I was bullied because I had red hair and had these red—how do you call them? Freckles. Plus I was Italian, so imagine.”

Is that really the same thing as being a worker whose passport was confiscated so they couldn’t leave their job, or living in fear of your life because you’re gay in a country that refuses to recognize you exist? I would suggest that it is not.

Later, a reporter asked him about a glaring omission from his declaration of empathy.

“I feel like a woman,” Infantino said. “I have four daughters.”

The point of Infantino’s remarks was not coherence; the point of all such whataboutism is to maintain a favorable status quo. He was trying to muddy the waters.

The point of Infantino’s remarks was not coherence; the point of all such whataboutism is to maintain a favorable status quo. He was trying to muddy the waters. In response to the movement to have FIFA set up a $440 million compensation fund (equivalent to the amount of prize money at stake over the next month) for workers and their families who have been harmed by conditions in Qatar, Infantino wondered instead whether Europe should set up a compensation fund for the migrants who have died trying to make it there.

“What we Europeans have been doing for the past 3,000 years, we should be apologizing for the next 3,000 years before we start giving moral lessons to people,” he said.

FIFA president Gianni Infantino says the West is in no position 'to give moral lessons' to Qatar, adding that European nations should instead apologise for their own histories.

There’s a version of this criticism that’s not insane, perhaps, but hearing it from the mouth of an international supervillain sort of clarifies what this is really about. When Infantino was asked about a recent (unsuccessful) push to kick Iran out of the World Cup over its repressive government crackdown on protesters, he said he’d be fine with Iran hosting the tournament, if it were to make it through the bidding process.

What about North Korea? A reporter asked.

Infantino replied that he’d actually already tried to get North Korea to co-host a women’s World Cup with South Korea.

This is the reductio ad absurdum of stick to sports—when you demand people put ideology aside, you are really asking them to accept your own.