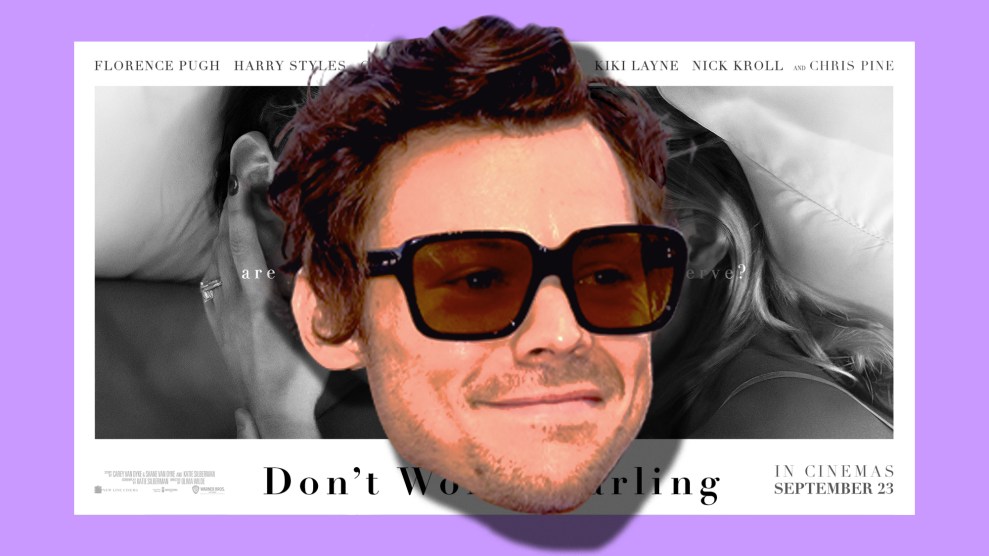 Don’t Worry Darling has all the makings of a smash-hit feminist thriller. It’s led by Olivia Wilde (Booksmart), one of Hollywood’s few female directors; it features Oscar-nominated actor Florence Pugh, a breakout star of the 2019 horror film Midsommar; and it’s as saturated with post-MeToo symbolism as it is with bright, stylish cinematography. Plus, as the trailer hints, it features a creepy, dystopian twist. Think: a sleeker, modernized The Stepford Wives with more sex and a better soundtrack.

So when I arrived for an advanced screening at Alamo Drafthouse Cinema in San Francisco’s Mission District last Monday, I was surprised to see in the lobby about 20 young people lined up to take a photo with a cardboard cutout of not Pugh or Wilde, but instead…supporting cast member Harry Styles. While Styles is by all accounts mega-famous (and a talented musician), he is not the movie’s lead actor. Or, at least he isn’t supposed to be. My feelings about Styles are similar to my feelings about dry toast, or the Gap—firmly neutral. So at a film described by Wilde as “The Feminine Mystique on acid,” the cardboard cutout gimmick struck me as out of place.

It was not long after the film started that I realized I was the one out of place.

When Styles’ face first appeared on screen, it prompted what I can only describe as a collective squeal.

The movie opens in Victory, California, a 1950s utopian desert town. Each day, the men of Victory head off to work on the development of “progressive materials” for the “Victory Project,” while the women stay home to do wife stuff like cleaning, cooking, or ballet class. We’re introduced to a beautiful young couple, Alice (Pugh) and Jack (Styles), who appear to be madly in love.

When Styles’ face first appeared on screen, it prompted what I can only describe as a collective squeal from the dozens of 20-somethings seated around me in the audience. This happened again in a scene when Jack performs oral sex on Alice on their dinner table, knocking her freshly prepared meal to the floor. An excited murmur rolled through the room. The theater, clearly, was full of Harry Styles fans. Styles was the novelty. Harry’s House indeed.

The audience’s apparent fascination didn’t end there. As the film went on, we see Alice slowly start to question her reality. She experiences disturbing visions and becomes distant and forlorn. Victory, it becomes clear, isn’t the idyllic town she had been sold. Then, in a climactic scene when Jack screams in pained frustration, “FUUUUCK,” many in the audience giggled uncomfortably, as if they thought it was Styles who was angry, not Jack. We soon learn things about Jack that make us see him in a new light. At a certain point, when details about Styles’ less-than-dapper character are revealed—including a cut to a younger Jack with long hair and a beard—I could hear snickering among my theater-mates. Viewers seemed to be more shocked by Styles’ facial hair than they were about the film’s big reveal.

As a whole, I enjoyed the film. Pugh delivers a delightfully chilling performance. It’s also an undeniably pretty movie, with its ice-cream color scheme and alluring visuals.

And Styles is a fine actor. At times, he’s funny! But his presence in the movie (and in the theater) was an unfortunate distraction from the art itself.

The film’s feminist critique is not subtle; themes of control and believing women (or distrusting them) are front and center. When Alice tries to explain some of her observations about Victory to Jack, for instance, he insists what she’s seen isn’t the truth. “Don’t get hysterical,” he tells her. (The word choice here was likely no accident; hysteria was long seen as a women’s “disease” and was thought to be cured by things like leeches, orgasms, or marriage.) Or, when Alice begs Jack to leave Victory together, she says, “Everyone is acting like I’m crazy. And I’m not crazy.” In another scene, the men of Victory chant repeatedly, “Whose world is this? Ours!” The whole movie is basically a two-hour-long gaslight, and the story of one woman’s struggle to literally break out of a man’s world.

Styles’ presence may boost ticket sales, but it will do so at the expense of the film’s impact.

So casting one of the planet’s biggest male celebrities opposite Pugh, in a movie about female empowerment, lands as an off-note in an otherwise decent melody. It is sort of like if director Jordan Peele had cast pop icon Taylor Swift as the white, female villain in Get Out, Peele’s 2017 psycho-thriller about “the universal monster that is racism.” Styles’ presence may boost ticket sales, but it will do so at the expense of the film’s impact.

And this movie has had enough distractions as it is. Its production and press tour have been consumed by a media frenzy, including rumors of a feud between Wilde and Pugh, Wilde’s split from Ted Lasso star Jason Sudeikis, a romance between Wilde and Styles, and allegations of Styles spitting on colleague Chris Pine at the Venice Film Festival, a charge which they both deny. (I’ll spare you all the thorny details, but if you’re interested in reading more about all the Don’t Worry Darling drama and Spitgate 2022, Vox has an explainer here.)

With all the cast drama, the media flurry around it, and Styles’ inherent fandom, it’ll be a wonder if moviegoers manage to make out the film’s central point: the horrors of sexism. And for that, we’re all a little worse off.