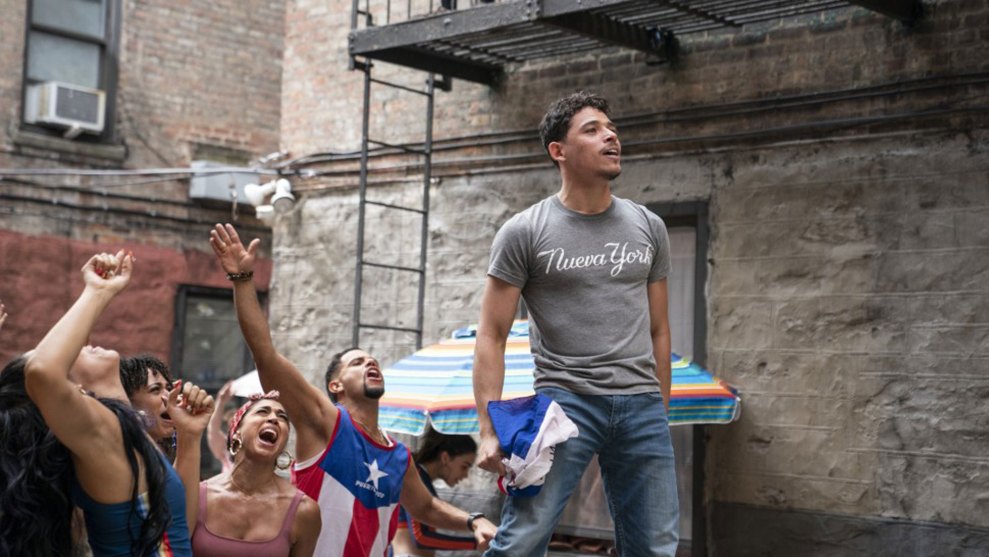 Anthony Ramos as Usnavi in In the Heights Warner Bros Entertainment

The chilly night under the bright stadium lights was a far cry from the dimly lit stage in Nueva York where I first saw In the Heights some 12 years ago. But as my wife and I—and dozens of other vaccinated people—settled into our seats at San Francisco’s Oracle Park and the movie remake of Lin-Manuel Miranda’s first hit broadway show blinked on the center-field scoreboard, a current of familiar emotions flickered through me. I was 3,000 miles away from the Richard Rogers Theater, but everything about the production that shaped my teenage years came rushing back.

The night I first saw In the Heights, a musical about life in Manhattan’s majority-Dominican neighborhood Washington Heights, my mother and I waited outside the Richard Rogers Theatre to get Miranda’s signature. Miranda played Usnavi, a young bodega owner who one day hoped to reopen his father’s bar in the Dominican Republic. The production, which we caught before it won a string of Tony Awards, was a precursor to his decision to be Alexander Hamilton in the first run of the nationally-acclaimed hip-hop musical. But In the Heights was the moment Miranda truly brought the hip-hop musical genre into vogue. He, along with playwright Quiara Alegría Hudes, performed a coup on Broadway’s stale, lily-white consciousness long before inclusion became an aspirational standard.

The show highlighted all shades of Latinx identity in ways that only New Yorkers understood. The dancing, the music, even the piragua guy—it all reminded me of the little details of life as a Puerto Rican kid in New York City. Yet the story, one of hopes, dreams, and community through the voices of Latinos living in Washington Heights, was universal. And even though Miranda’s Heights character was not the one to make it out of Washington Heights—that was Usnavi’s love interest Vanessa, with his help, and Nina, who fled the neighborhood for college—my mother and I had this feeling that Miranda himself, with this beautifully crafted and choreographed spectacle of Latinidad, home, and community, on a stage before a predominantly white and affluent audience, would be the one to make it out of the barrio and fulfill his sueñito.

I fell for Broadway’s escapism that night, transfixed by the feeling of sitting in a room full of strangers and getting lost together in a story completely unfamiliar for some and deeply affecting at the same time. It was in those stories, I felt sure, that we could learn the most about our humanity. But In the Heights felt different, too, because it felt like so much more than connection with the unknown. Its story felt all too familiar. When I saw Abuela Claudia, her graceful grey locks and round cheeks, slowly walk on stage and cry out “paciencia y fe,” I saw my own grandmother, who came to New York from Puerto Rico. When I saw the influences of salsa and merengue in the dance numbers, I saw the parties my family hosted.

I was an ambitious, perfectionist teenager whose family held an unflinching pride in its Puerto Rican identity. But I also questioned my place within the culture. I needed to find a way out, to live out the dreams of opportunity that my parents wanted for me. So on stage, my heart connected with Nina’s story—the overambitious Nuyorican who sought to leave the comfort of home for the greener fields of Stanford, only to question whether that choice was the right one; whether she instead should return to the safety of her community and help her family when they needed it most. But even the details of her story—the fact that her father wanted what was best for her and would risk his livelihood to do so, that she felt the weight of expectation to rise above her circumstances and fulfill the dreams that many others could not achieve, and the alienation, in both her elite college community and at home, that came as the price—rattled me. Around that time, I flirted with applying to Stanford. My mother encouraged it, because of the generous financial aid package. But I felt afraid that it was too far from home, an irony not lost on 30-year-old me who now lives just an hour away from campus.

Last night's showing of @intheheights was magical. It reminded me of the moment my mom and I went to see it during its initial Broadway run—and waited in line for @Lin_Manuel's signature #pacienciayfe pic.twitter.com/RXknGQ1naq

So much as changed in the decade since In the Heights hit Broadway. Our first Black president, nicknamed “deporter in chief,” was followed by our (not even close to first) white supremacist president, who separated families at the border. A pandemic cost the lives of thousands upon thousands of Black and Latino people—an Afro-Latinx identity that has shaped my very existence.

The creative minds of Crazy Rich Asians director Jon M. Chu, Miranda, and Alegria Hudes brought the magic and depth from the stage onto the big screen and adjusted it to the times. They transformed Sonny, who I remember as Usnavi’s comical sidekick cousin at the bodega, into an undocumented DREAMer who goes to rallies seeking to fulfill the aspirations of those like him. They gave Abuela Claudia, played by Olga Merediz, who also played her in the original musical, a fantastical sendoff, straddling the subway tunnel between life and death and recounting her family’s own migration tale and their hopes and dreams.

The Broadway purist (OK, snob) in me often snickers at film adaptations. But In the Heights managed to extend its characters’ aspirations from its Broadway beginnings, morphing them into stunning visual moments that straddle the lines between imagination and realism. It allowed us to see the world through the eyes of these powerful Latino people, to see their dreams the way they see them. Usnavi (Anthony Ramos) opens the film telling a story to a group of children, the sand and waters of a Dominican Republic beach nestled in the background. And toward the end, as Benny (Corey Hawkins) and Nina (Leslie Grace) express their love for one another, the camera shifts, showing them gracefully traversing the sides of the brick apartment buildings overlooking the sunset over the George Washington Bridge.

The film was a projection of what I yearned for most this past year, stuck at home. I longed for the collective joy of dancing maskless in the streets under the bitter hot sun. I wished for the moment of hope felt in the infamous pool scene when on one of the hottest summer days dozens of bathing-suit-clad residents wait to hear if they’d bought their bodega’s winning lottery ticket. They sing about what they would do with $96,000—a brief feeling of hope lost in years of despair, followed by swift disappointment.

And in more ways than I had imagined, I changed, too. When Nina appeared on screen, I was instantly transported to the moment I watched a different version of her under the spotlight in centerstage. My heart still fluttered as she powerfully told herself respira—“breathe”—wondering how to tell her community why she was coming home from college. When Vanessa (Melissa Barrera), a salon worker who hopes to move downtown to be a fashion designer, rushed through the streets hoping for a better future, the colorful fabric for her imagined designs flowing from atop street buildings, I saw the aspirations of my twenties fly by. As I sat in the stands among the largely white audience, with these treacherous years (mostly) behind me, I felt most like Usnavi, a man trying to hold on to the dream he long hoped for while creating new ones.

Waiting for a Lyft back across the Bay to the home I’ve created with my wife, I thought about my recent trip to New York, the first in two years. That night, I realized that that sense of home goes where your heart goes. So do your dreams. But the love for where you come from, for the community that you left behind, the one that ultimately shapes who you are, never leaves you. It’s okay to miss that specific feeling of comunidad you feel around your family, even as you live out the grand dream—a life full of happiness—your parents, your grandparents, ultimately wish for you.

While my dreams may have changed, my connection to the feeling the movie and the musical alike gave me—about the way it depicted the full spectrum of what it means to be Latino, the way art can drive connection—was the same. And after a devastating year for the world, there was nothing more I needed.

This morning, my mother texted me a picture of a newly-fashioned projector screen in her backyard. She told me that the family would be seeing In the Heights tonight. So will I, again and again, searching to relive a simpler time. After some exclamations (“Woow that’s so cool”), I wrote, “Reminds me of when we went to see it.”