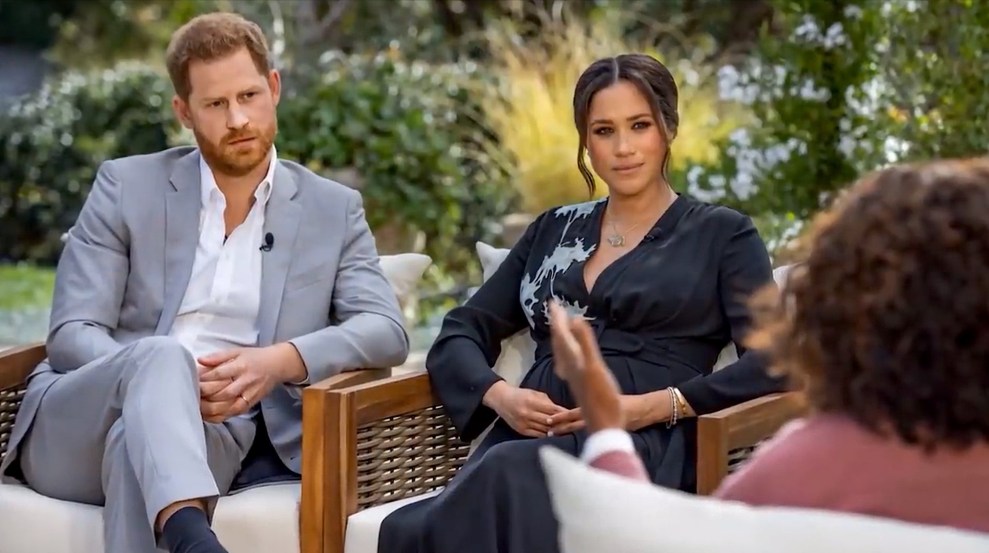 As viewers around the world tuned in for Oprah Winfrey’s much-anticipated interview with Meghan Markle and Prince Harry on Sunday, the reaction stateside was one of instant shock and fury. How could a family, particularly one that experienced a strikingly similar scenario nearly 25 years ago, be so relentlessly cruel? For Americans, every turn of the two-hour conversation seemed to torpedo years of public rehabilitation efforts and revealed, once more, that the royal family is an undeniably racist and outdated institution.

Over in the United Kingdom, where officially the interview wouldn’t air for another 24 hours, those with a reliable VPN were able to participate in the much-watch television event as it aired in the US. But for Brits who had tuned in to CBS at 2 in the morning local time, a horror unrelated to the couple’s raw pain quickly emerged.

“American adverts make me feel like I’m in some post-apocalyptic world,” read one tweet. “American medical adverts are some real dystopian shit how you gonna tell me I might die,” read another. Similar sentiments, many of them captured by writer Ayesha A. Siddiqi in a remarkable thread, echoed across a country unfamiliar with the simple act of watching television in the United States, where prescription drugs are heavily advertised. For Brits watching from afar, the strange deluge of pharma adverts treated the people they were addressing not as people but as vulnerable consumers to be preyed upon. “If these medicine ads are what it’s like to not have an NHS I never want to experience that.”

Of course, that ghoulish experience is an almost uniquely American one, in the same way, that a monarchy having any hold on the public’s attention is a uniquely British affair. Other than New Zealand, the US is the only country in the world that permits direct-to-consumer pharmaceutical advertising, causing companies to promote expensive, designer drugs, oftentimes inappropriately or even dangerously to patients, just as experts have warned. In the UK, where strict rules block such adverts and prescription medicine rarely costs you more than £9, or roughly $12, thanks to the National Health Service, the notion of spending $1,200 a year for everyday drugs and life-depending medicine, as is the American way, is downright absurd. It’s no surprise then that the NHS is the one institution that is more beloved than the queen herself.

I’m an American who has lived in London for just over two years now. The practice of never having to present a form of ID, a copayment, or an insurance card upon visiting the doctor has been an equally absurd one for me. Somehow, some way, I initially suspected, I would get boned with a surprise charge down the road, as happened after too many doctor trips in New York. Though I eventually realized that those fears were unfounded, the sheer wonder at a health care system that is centralized and free at the point of use has not ceased. And I’ve felt it intensely in the past month alone after two trips to the emergency room: the first after four days of sudden and excruciating leg pain, initially suspected to be a blood clot (my GP’s fears, not mine; I had simply suspected that lockdown was finally coming for my physical well-being). Then days later, after an ultrasound failed to detect such a clot, I returned to St. Thomas’s Hospital with a new pattern of grotesque bumps that had started to accompany the leg pain overnight. (Shingles! Are! Fucking! Disgusting!) Each visit required four to five different tests; not once did I need to think about what this would cost me. The medicine I was eventually prescribed came out to a mere £4.

It’s been an interesting thing over the past 36 hours to watch two cultures absorb the same televised event and identify deeply nefarious systems in each other. For Americans, it’s an institution that has enshrined the values of colonialism, one that wouldn’t think twice about leaving the family’s first woman of color to feel profoundly, even suicidally abandoned. For Brits, it’s an immoral and inhumane health care system that continues to rule the richest country in the world. These moral abominations are such unremarkable features of either country’s landscape that people have grown comfortably numb to them. It helps to look at them again through fresh eyes. You quickly see the same solution should be applied to both: abolish the monarchy, abolish the US health care system.