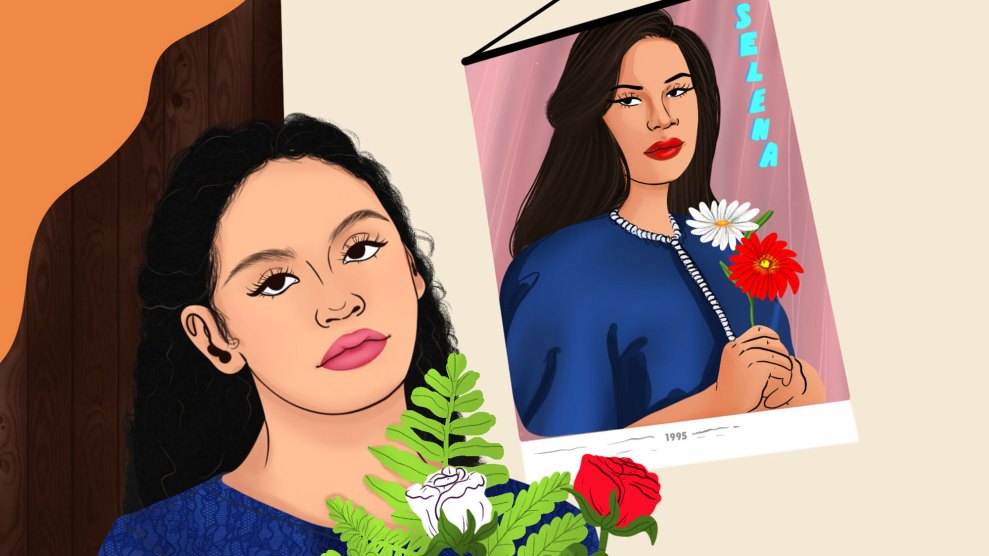 "Anything for Selena" is about so much more than the career of Selena Quintanilla.Illustration by Iliana Galvez

Anything for Selena is more than a podcast about the iconic 1990s superstar Selena Quintanilla; it’s a nine-part series about belonging. It’s Maria Garcia’s journey of discovering what it means to love and mourn Selena, and what looking back at her legacy can tell us about pop culture and about Latinx identity today.

With an undeniable talent as a singer and dancer, Selena shined on stage with bold red lips and large hoop earrings, wearing sparkly bustiers and high-waisted tight pants. She mesmerized audiences in Texas and along the US-Mexico border first, then took Mexico by storm. She built a loyal fanbase across the United States and sold millions of albums worldwide. But the devotion she sparked wasn’t a simple case of celebrity. Before she was tragically killed in 1995, she had become the queen of Tejano music and culture, who was loved by both countries, and was unapologetically herself as she navigated both cultures with pride—something that left a huge impression on a young Garcia.

“The podcast is truly a lifelong culmination of my quest to understand why this woman has meant so much to me and has been a profound flashpoint on these moments in my life,” Garcia recently told me about the series, which debuted early this year. “So I had to go back, I had to go back to little Maria who was new to this country, trying to figure out where she belonged.”

Selena’s mere existence sparked mainstream conversations about race, language, and identity. And today, more than 25 years later, we’re still grappling with the loss and meaning of Selena. Just last Sunday, the singer was honored with a Lifetime Achievement Award at the 2021 Grammys; she only received one Grammy before her death, in 1994. This new recognition brought back memories of Selena at the peak of her career for her older fans, and joy to the new wave of young Selena stans who weren’t even born until after her death. “We’ve grew up with Selena as a person—and also as a symbol,” Garcia said. For these younger fans, Selena is cultural heritage, and they are making meaning of her in a whole new way.

This range of experience is even reflected in the way the series can be heard. Each episode is available in English and in Spanish, and while the episodes are very similar, they’re not exactly the same. As Futuro Studios senior producer Antonia Cereijido told me, the bilingual series has allowed for some families to experience the podcast differently across generations, with older relatives listening in Spanish and younger ones in English. Anything for Selena is a collaboration between WBUR in Boston and Futuro Studios.

Above all, though, the series is a deeply personal project—and you can sense that as a listener. I asked Garcia how she felt about turning her fascination with the idol into work—particularly over such a trying, pandemic-plagued year—but she told me the process actually solidified her love for Selena even more. “Exploring Selena’s legacy, loving Selena, will never feel laborious to me. On the contrary, it feels like one of the lightest most precious things about my life and my journalism.”

The series ends with something of a letter from Garcia to Selena herself: “Thank you. Thank you for never shrinking yourself, even when your Spanish wasn’t perfect, even when others tried to control your destiny. The world tried to make women like you wilt. You didn’t. Instead you bloomed radiant and joyous.”