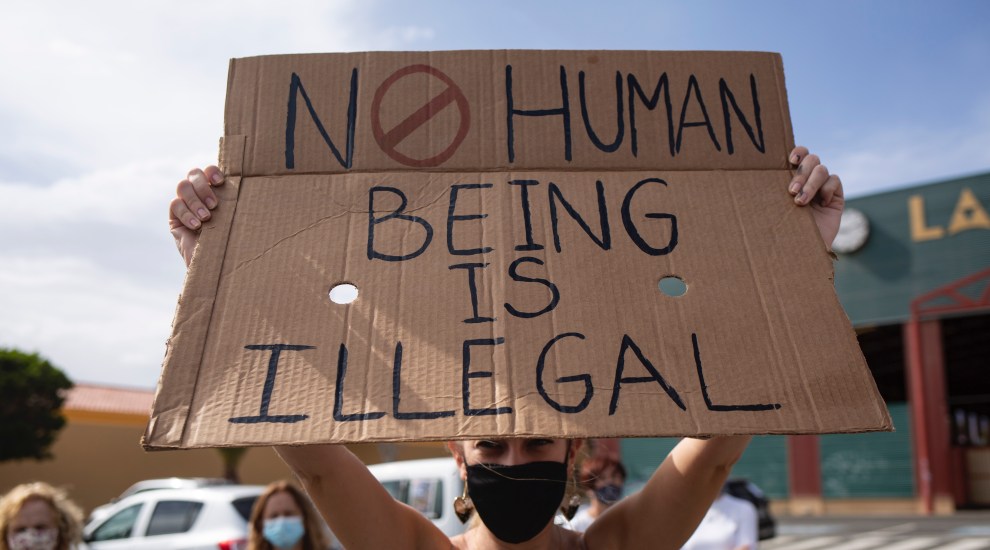 "Drop the I-Word" launched in 2010 as a campaign to change "illegal alien" and "illegal immigrant" to "undocumented immigrant" and other terms, a call answered by the Biden administration.Manuel Navarro/Picture Alliance/Getty

In a major milestone for immigrants’ rights activists seeking shifts in language and law, the Biden administration has dropped “illegal alien” from government communications, taking federal agencies out of the business of branding people—instead of actions—illegal. The move marks the culmination of the yearslong “Drop the I-Word” campaign, spearheaded by author and Mother Jones board member Rinku Sen. Her movement is widely credited with creating much of the groundwork for retiring the phrase.

The shift was made in an internal Homeland Security Department memo directing officials to replace “alien” with “noncitizen,” and “illegal” with “undocumented.”

“I feel real pride” in the change, Sen tells me. Biden’s decision wouldn’t have been possible, she says, if it weren’t for many broader changes first, especially in the media. “This would have been much harder for the administration to do if we hadn’t first changed most journalistic and some governmental practice on the I-word.” Many newsrooms including ours use “illegal” only to describe actions, and Sen had amplified that distinction. (Tell us at the bottom of this post which language changes should come next.) But she’d met heavy resistance from some newsrooms whose editors construed her pitch as a call for euphemistic substitution rather than a material improvement to accurate reporting.

“We faced a lot of cynicism from movement people, news consumers, and journalism at the beginning,” she says. “Some thought it would make no difference, some thought it was less important than focusing on policy change, and some thought there was no need for a shift. But as we told more stories about how the word affected peoples’ actual lives, momentum began to build.”

The Associated Press agreed when in 2013 it dropped “illegal immigrant” from its stylebook after a group of 24 scholars issued a statement calling “illegal immigrant” neither neutral nor accurate. Protesters, including a son of César Chávez, marched outside the New York Times headquarters that year with signs that read “No Human Being Is ‘Illegal’ Drop the I-Word,” and delivered more than 70,000 signatures asking the Times to change its use. The Times’ public editor, Margaret Sullivan, had written, “I see no advantage for Times readers in a move away from the paper’s use of the phrase ‘illegal immigrant.’”

In response to the protest, Times standards editor Phil Corbett loosened the guideline but stopped short of a one-size-fits-all rule. He said “undocumented” “has a flavor of euphemism and should be approached with caution outside quotations.”

“Flavor of euphemism” is telling here. It too has a flavor of euphemism, and it gets to the heart of many language choices: Is there anything more variable and less neutral in journalism and law than a flavor palette? Maintaining any living guidelines is tough work made tougher by an ethic in journalism that assigns equal and equivalent weight to all interpretations of a phrase. Although “undocumented” doesn’t always fit—some immigrants have documentation short of authorization—“undocumented” has never been a euphemism; it’s always been a clarifying corrective to the euphemism before it.

That’s why a landmark Supreme Court opinion omitted the term “illegal immigrants” in 2012 except when quoting other sources. It’s why New York City’s Commission on Human Rights issued language guidelines to similar effect. And it’s a change boosted by Sonia Sotomayor when she became the first Supreme Court justice to issue an opinion using “undocumented immigrant.”

One of the unspoken assumptions of top editors is a need to balance the appearance of not getting out over their skis—jumping to a wrong “side”—with the appearance of not being a hired guard of old convention. That’s a separate debate. The clearest measure of language is which words serve the facts and truth on which our work depends. That’s all; the rest is reputational. The rest gets you friends and critics, but if you count on those, you’ve lost the plot, which is to improve accuracy, reduce harm, and frame fairly. “Illegal immigrant,” unlike “undocumented immigrant” and “illegal immigration,” is a grammatical misfire because it’s a misreading of history.

The archives agree: “Illegal immigrant” and “alien” are cudgels. “Alien” was baked into this country’s founding vocabulary to strip British of personhood and legal rights. It appears in the Alien and Sedition Acts to limit criticism of government and make citizenship harder to come by. That’s the backdrop of Donald Trump’s five uses of “illegal alien” in last year’s State of the Union, and his Justice Department’s memo telling federal prosecutors to say “illegal aliens” instead of “undocumented.” It’s the reason he named a National Day of Remembrance for Americans Killed by Illegal Aliens.

The Times has long avoided “illegal aliens.” But “illegal immigrants” is misplaced on the same grounds. It’s “pejorative,” says Richard Prince, media critic and author of the Journal-isms newsletter, who tells me, “Remember that in 2019, the National Association of Hispanic Journalists disinvited Fox News as a sponsor of its convention. NAHJ returned $16,666 after Fox radio host Todd Starnes’ comments about ‘a rampaging horde of illegal aliens’ in reference to Latin American migrants.”

“Why go out of your way to antagonize people? Language changes,” Prince tells me.

The Times’ internal guidelines still accept “illegal” to modify people, not just actions. In an email last week, Corbett told me, in part, “We are continuing to discuss possible additional changes. We encourage writers to use a variety of terms and be as specific as possible in describing individual circumstances.”

The truth about labels is that they constantly change, and editors without a trace of misguided intention can be left using earlier defaults while judged by today’s practices—a feature of label evolution. But the euphemism treadmill is not what’s happening here. One has always been more accurate. Perhaps Biden’s decision to change will be a tipping point for the media too.

What do you think? Share your ideas below. (Our style guide is here.)