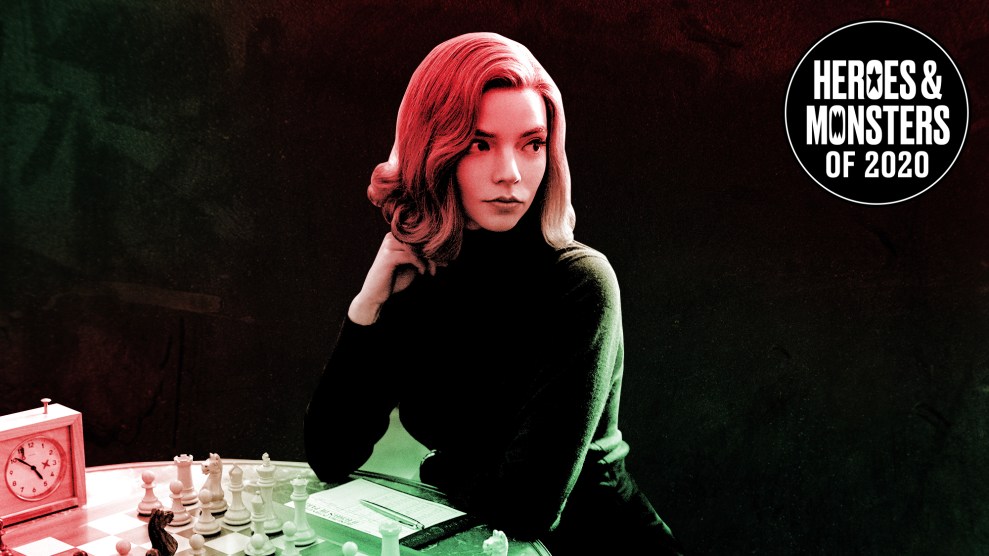 The protagonist of The Queen’s Gambit, the Netflix show about a child chess prodigy who ascends to the game’s greatest heights, is Beth Harmon. Harmon is what we might call a “cool girl.” She likes beer. She likes chess (technically a sport). She is “chill.” She, almost exclusively, rolls with the boys. And she is just as good as or better than the boys at all of the things they like: chess, drinking beers, and getting girls.

None of this is unrealistic. And (minus her beer skill being born of her alcoholism) they’re all to varying degrees good or neutral. But, in context, it’s kind of weird. Despite the sexism we know was rampant at the time in chess—and still is—everyone seems to love Harmon.

The men she faces off against might sometimes seem skeptical and dismissive of an unknown woman having the gall to challenge them at chess. But after Harmon crushes them, they are gracious. They vigorously shake her hand and wish her the best. Men often don’t treat even each other, let alone women, like this. They lose poorly.

In this way, The Queen’s Gambit can play as a lovable fantasy. As Carina Chocano wrote in the New York Times Magazine, traditionally in “literature and film, the male genius is lionized” while “the female genius is institutionalized.” In real life, Harmon could not rise as easily as she does. That she does, can “cheer us up.”

But there’s something irksome about the fact that even a fantasy like The Queen’s Gambit can only go so far. Beth’s success is individual. This is in contrast to those around her, instead of normal. Almost all of the women in the show who are not Beth are cruel or dumb or cruel and dumb. In the universe of The Queen’s Gambit, the only way to be a woman worthy of anyone’s time is to be an extremely good chess player, or for a fleeting moment, a mordantly witty Parisian model. The other exception to this sits squarely in another tired trope: the sassy Black best friend, who exists mainly to help Harmon finesse her way through tricky moments in the plot.

The cardboard quality of side characters gets covered up by stylishness. The show coasts off its solidly fine, but not great, plot by infusing it with beautiful shots, coloring, and all of the other lavish trappings of prestige TV. These ornaments can try to turn otherwise mediocre shows into the high-brow, but it never quite works. “Everything is brooding, tortured anti-heroes,” Matt Christman writes in an essay describing the frequent emptiness of these pieces of art for Current Affairs, “[with] ironically counterposed musical choices.”

In The Queen’s Gambit’s case, prestige TV tics can’t cover up a reductive arc. Harmon is basically the same person she was as a child: observant, quiet, opaque, and chill. She seemingly reins in her struggles with substance abuse but doesn’t change in any other discernible way from her prior days of drinking and taking tranquilizers.

From her first chess tournament to her big showdown in Moscow, instead, she remains one of the guys.

In The New Yorker, Sarah Miller points out that the central tension driving Harmon in the novel version of The Queen’s Gambit has been nearly stripped from the show. In the book, Harmon requires chess to realize she has worth. In the Netflix version, Harmon’s arc is already completed once you meet her. She “doesn’t need chess to survive,” Miller writes. “She’s a confident girl who finds everyone annoying and wears great clothes and flies off to beautiful places to be weird around guys….If she didn’t play chess, it would be ‘Emily in Paris.'” When a writer at Life asks Harmon about the difficulties of being a woman in a male-dominated sport she says there is none.

There is something alluring about creating a fictional world in which the lived struggles of women, people of color, and LGBTQ people don’t exist. But the line between that and creating an elaborate way of saying they actually don’t exist can be fine. It feels like The Queen’s Gambit walks back and forth across it. Maybe more prevalent sexism exists in the fictional world of The Queen’s Gambit. But we don’t see it. If it is a problem, it’s something to worry about elsewhere, among a few bad apples, not an embedded part of the cultural pathology. That pathology somehow is broken by female success, like magic. As Chocano writes, it’s a fun escape. But it is also a decidedly male fantasy of genius—genius honed in isolation, tortured, full of forgivably toxic byproducts, aloof from society, worshiped rather than nurtured and enabled by others.

This version of genius feels like a disservice to what many oppressed groups must do instead: work together. In the show, this is given too little attention. When Harmon has her first period during her tournament, she is saved by the only other female player there who has a spare tampon. It seems like a certain friendship is about to play out. However, that camaraderie never comes to fruition. The character isn’t heard from until almost the end of the series when she tells Harmon that her success is inspiring for women. By that time, Harmon has literally forgotten who she is.