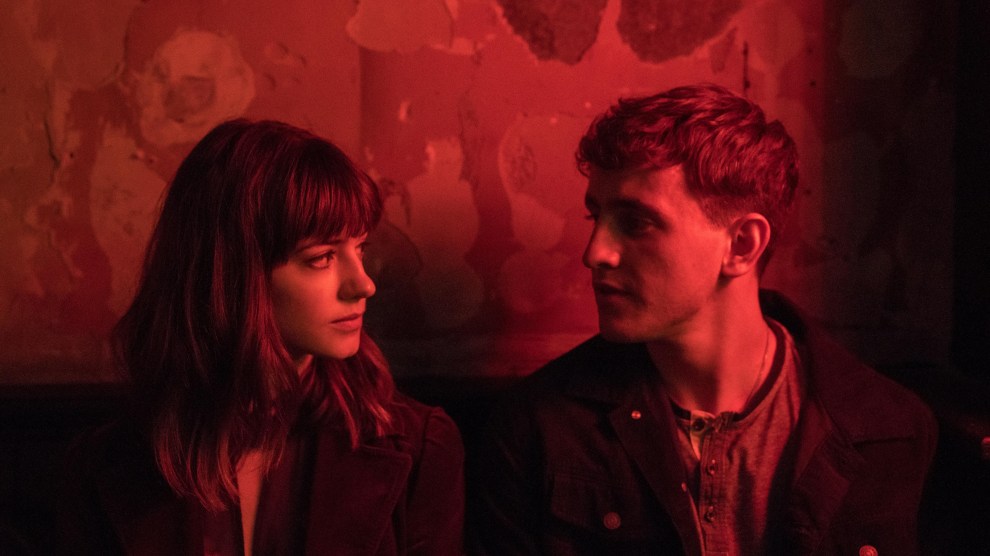 After about eight episodes of Normal People I noticed that I had been looking up songs from the episodes more than I did with most shows. Unsurprisingly, I wasn’t alone. On Spotify, at least people 37,000 follow the Normal People Official Soundtrack playlist. The follower isn’t unprecedented. But it is solidly higher than other shows.

What did seem a little unprecedented was what I stumbled on next: both the fictional protagonists, Connell and Marianne, had playlists.

The college students—whose meandering and fluctuating but the persistent relationship is the center of the show—had their own  “specifically curated” lists of songs that weren’t even in the Hulu series. Marianne’s playlist alone is doing about as well the show’s, at over 35,000 followers. Connell’s playlist is more popular than the show’s at over 48,000 followers.

The music is good, and the playlists are interesting views into the minds of characters. But, still, it is weird.

There are at least two layers of fiction people have to pass through want to listen to the playlists. (Let’s put aside, for a moment, each character was first portrayed in a novel by Sally Rooney before we overdose on metafiction.) There is the fiction of the show itself. And then an even deeper fiction that gives Marianne and Connell a weird sentience—as though they’re out in the world doing things like listening to music and making playlists, even when they’re not on screen.

And yet, despite being bizarre, it also made sense. I almost expected to find them. I don’t think anyone would be interested in Tim Riggins’s, Tony Soprano’s, or Carrie Mathison’s playlists. (Maybe just Soprano’s, but purely for the novelty of it.) Yet, Marianne’s and Connell’s seemed natural, by comparison.

Part of it is just who they are. For a lot of people, there’s something more enticing about the music taste of young, aspiring European writers, than for a high-school tailback, mobster, or CIA agent. Semi-artsy college kids have better taste in music than the type of person who thinks CIA torture black sites are good.

Some of it may lie in the potential fact that Rooney wrote the characters with their own playlists, almost designing them to be accompanied by music. Vogue noted that “Spotify playlists believed to have been compiled by Rooney herself while she was writing the novel have been circulating online” among “super-fans.” BuzzFeed appears to have found them, (music was added to them before the book came out, and a Spotify account that appears to be her partner’s, John Prasifka, follows the account). They’re a bit more vanilla than the official Hulu product, but they show that Rooney intended for the characters to live off the page.

On the official playlists, the music supervisors (and possibly the actors, who they worked on the curation with) took strange liberties. Nothing about Connell, a jocky character with no hint of a subversive or counter-culture edge besides liking literature (a low bar, I know) suggests that he would particularly enjoy or ever seek out experimental artists like Tirzah or Holly Herndon. I expect that Marianne would not have the patience to put up with Mac DeMarco, but he’s on her playlist anyway.

I wondered if there was just something about the soundtracks for dreary, dreamy, European romance that attracted listeners. Sufjan Steven’s, who has been putting out indie bangers for almost two decades now, most popular songs on Spotify are dominated by the stuff he made for the soundtrack to Call Me By Your Name—another engrossing love story with deeply fleshed out and empathy inspiring characters set in the beautiful Italian countryside. Yann Tiersen, who has been doing the same thing for a little longer is in the same boat. His songs on the soundtrack to Amelie, a whimsical 2001 movie set in Paris, dominate his top ten most-played on Spotify. Midnight In Paris playlists have an impressive number of followers; the successful indie trilogy of Before Sunrise, Before Sunset, and Before Midnight have solid numbers.

But there’s more to it though than just simulating a cavort through Europe.

The top playlist for In Bruges, a moderately successful surreal, dark comedy set in Bruges, Belgium had few followers (276). The most popular playlist for The Grand Budapest Hotel—which is set idyllic Eastern European mountain town only has around three thousand. Which is a lot, but still an underperformance given that it comes with the Wes Anderson brand, know for curated, tasteful music. Plus, other playlists of popularity were solidly American: Atlanta, a show about rap in Atlanta; Mid-90s, a skateboarding movie set in L.A. in the 90s; and Big Little Lies, a drama about rich people in Carmel, California.

Drawing conclusions from these numbers feels like a Rorschach test. But I think the thing that runs between these shows and movies and Normal People is that they’re set in worlds we deeply want to be in, with people we want to mingle with.

People on the internet stan Reese Witherspoon and Laura Dern with fervor, and anyone who doesn’t think Northern California is paradise is a maladjusted sadist. Skaters idealize the 90s as a hallmark era of fashion and music. If you even vaguely like rap, wouldn’t you want to spend a night each week in Donald Glover’s Atlanta, Georgia?

The same goes for Normal People. I suspect that a lot of people who watch the show see Marianne and Connell as people that they would want to be friends with if they existed in real life. They are decent, well-meaning, agreeable, attractive, and talented people with vaguely cool taste.

Making parasocial relationships with fictional people on a screen as a form of escapism isn’t a novel way for people to consume media. What’s new are the options to indulge. Hulu, the creator of the series, made the Spotify playlists for Marianne and Connell. In the past, one would have to make up a playlist themselves, imagining what Connell would choose. No more.

The playlist goes one level deeper than fan-boying. It brings the escapism into the real world. It creeps into our bedrooms, home offices, and kitchens after we turn the TV off. The reprieve from reality continues ambiently during reality.

“I’ve said it loads of times, Connell and Marianne don’t feel fictional to me,” Paul Mescal told the New Yorker. In some ways, if the story can be constantly read—after the TV there is a playlist—there’s a way of wondering where the fiction ends.

That feels acute right now. We can’t see our friends or go anywhere or do anything. It makes sense that people want to peer into what it would be like to hang out with people that they’d want to be friends with, in Europe. And when the show ends, having their playlists on in the background keeps them in our lives and helps keep us their world— which is so much more pleasant than the one we’re working through now—just a little bit longer.