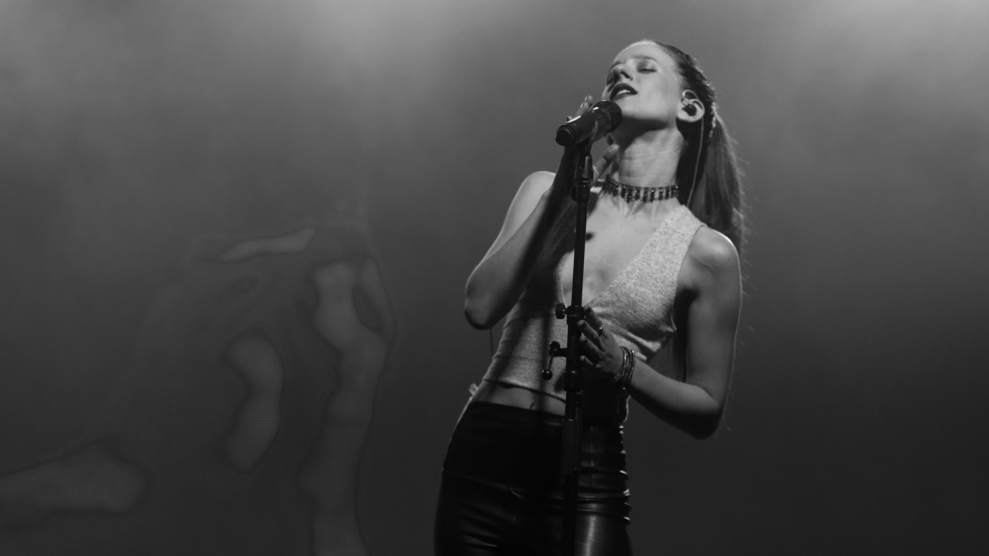 Samantha Gongol doesn’t mind the mistake. It’s become the running joke of the tour: The lead singer of Marian Hill isn’t named Marian Hill. The band’s name is actually a mashup of two characters from the corny play The Music Man. So, how does it end up sounding so cool?

When Gongol and Jeremy Lloyd, the other half of the band, chose Marian Hill it was more indicative of their sound—personal influences collaged to evoke universal and undeniable hipness—than the claiming of an influence. “We weren’t like, ‘Yes! The themes of The Music Man resonate deeply with the type of music we want to make,” says Lloyd. “It was very much, ‘What are cool word combinations?” It’d be hard to know, with their vibey status that they both acted in the musical in high school together.

Marian Hill exudes a nuanced edginess. They create a well-balanced tincture of electro-pop, old school jazz, and R&B that feels rebellious but controlled. It makes sense Marian Hill’s big break came from a 2017 AirPods commercial that used their song “Down.” Their sound could be labeled “designed by Apple in California.” It is careful but innovative—even chic. That has led to a commercial appeal that has skyrocketed the group onto every curated playlist from Spotify and to your local Target shelf.

Their newest release, Was It Not, delivers on this musical composure. Longtime collaborator, sax master, and school friend Steve Davit is back for the high of the collection, “Eat U Alive” and new-to-the-scene songstress Dounia declares their darker sides on “Take a Number.” “No One Knows” is the throwback indie-emo track made for anyone craving the days of The xx’s Tumblr-ruling era.

Lloyd and Gongol recently chatted with me (from our respective quarantines) about the new EP, being an independent artist in the age of coronavirus, and a musician’s purpose in these trying times. Their answers have been edited for clarity.

You had this infamous Apple AirPod commercial that aired using your song “Down,” launching you into the mainstream right between albums. How did that alter your process and approach to making music?

Jeremy Lloyd: It’s hard for anything to compare to Act One. As our debut album, that was something we were writing towards. For years we were like, “What are we? What is Marian Hill?” Unusual [their third studio album] was written way more in the context of just trying to steal time while we were touring. We were also trying to lean into a little bit more of a pop sensibility due to the spotlight.

How did writing and producing Was It Not compare?

JL: The EP came from a place of reflection—there’s finally been some calm. Kind of turning around and realizing we’re an established artist. We’ve been in the industry for six years. There’s a lot of exploration of that, reckoning with the past and these adult emotional experiences.

Typically after artists drop new music they tour. But you recently had a show canceled, like so many others. How’s coronavirus been affecting you as independent artists?

Samantha Gongol: When you play live shows, when you plan a tour, you get guaranteed [money] from these venues and festivals that make up—depending on how much of your income is made up by streaming—a really significant part [of your pay]. Especially if you’re touring all the time. That allows you to have some sort of financial stability and when that’s taken away, it really does affect things.

JL: I’ve been thinking about how lucky we are. We have different sources of income to fall on back on, but group members we’ve worked with, they’re people who had two or three months of steady work lined up. That was just canceled.

SG: Jeremy and I haven’t been touring as much in the last year, so that’s been interesting to see how that affects us and how much of a financial component it does makeup. When you’re in it and constantly touring, you take that for granted. But when you don’t, it allows you to see how important [touring] really is.

What’re you hoping for out of this new EP?

JL: I hope this reaches people who have both grown with us over time and [they] can share in the emotions of looking back on things, wondering about their significance and find the beauty in the uncertainty.

SG: We’re so lucky to have been able to do this for as long. Anytime we’re able, we’ve got to connect with people and make them feel better.

Was It Not is out now on all streaming platforms.